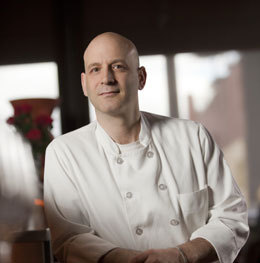 Side Dish: Branching Out

Chef Marc Vetri and other notable chefs bringing their cuisine to South Jersey.

Forget the food court. Who would have thought a shopping mall would become South Jerseyâs next great dining destination? Thanks to the presence of a big-name chef and some landmark legislation, thatâs soon to be true.

Marc Vetri, the restaurateur behind some of Philadelphiaâs most storied Italian restaurants, is adding to his collection with an outpost of the popular Osteria, a cornerstone of the MooresÂ­town Mallâs extensive renovation project. Heâs the latest in a line of chefs who are crossing the border into South Jersey to open up new eateries or expand on already successful concepts.

Some say this migration began with chef Rakesh Ramola, formerly of Tiffin, who opened IndeBlue in Collingswood in 2009. Then in October, Tavro 13 opened in Swedesboro, helmed by chef Terence Feury, a longtime fixture in the Philadelphia dining scene. Joining Feury is chef David Katz, who recently closed his Rittenhouse Square bisto, MÃ©mÃ©, to move on to other opportunities; Katz helped construct the Tavro 13 menu and curated a specialty wine list which includes more than 50 bottles.

Han Dynasty, an authentic Sichuan Chinese restaurant with locations in Center City and beyond, also opened an outpost along Route 70 in Cherry Hill this season.

And now Vetri, winner of a James Beard Award for âBest Chef Mid-Atlantic,â is perhaps opening a door for other well-established chefs to try new ventures in South Jersey.

The famous chef had been looking into the suburbs for a while, but hadnât yet found a space that stuck out. Once Zeppoli, a buzzworthy Sicilian restaurant by chef/owner Joseph Baldino, opened up in CollingsÂ­wood, many industry veterans took noticeâespecially since the 35-seater was seemingly full every night. âItâs an awesome, awesome restaurant. So we started to think about it (more seriously),â Vetri explains.

The famous chefâs name had enticed Moorestown residents for more than a year, as they voted to overturn the historically dry townâs ban on liquor last year in order to allow liquor licenses at the mall. After the ordinance cleared, Vetri officially signed a lease in mid-September, posting an announcement with the signed papers on his Twitter account.

That means big things for South Jersey. His eponymous restaurant, Vetri, opened 14 years ago and quickly earned the highest restaurant rating from the Philadelphia Inquirer, followed by coverage from national publications and numerous awards (plus two cookbooks). Mario Batali calls it the greatest Italian restaurant on the East Coast.

Now, the original restaurant operates solely in a chefâs tasting menu format, with six courses featuring signature dishes like spinach gnocchi in brown butter. Guests who want to experience Vetriâs cuisine in a more freestyle way opt for the area of North Broad Street, where Osteria (Italian for âtavernâ) and Alla Spina (an Italian gastropub with 20 beers on tap) offer a similar approach in more casual atmospheres.

The New Jersey version of Osteria will debut with some new ideas and throwbacks to crowd favorites from his earlier days. Expect thin-crust pizzas, pastas, wood-fired meats and fish, in a family friendly atmosphere thatâs open for lunch and dinner.

âWe definitely twist the menu a lot. I imagine (in Moorestown) it will be the favorites from Osteria, but the menu will stay a little bit more constant,â Vetri says.

âWeâll definitely have seasonal specials and all that. All the specialty things that are always on the menu at Osteria will be on the menu there, but weâre going to bring back the spaghetti lobster that I opened up Vetri with 14 years ago.â

The dish in question is a rich, soulful dish of spaghetti with freshly-cooked lobster meat, and San Marzano tomato sauce enriched with lobster stock. âWhen we opened (the Philadelphia) Osteria, we had it on the menu for the first year, so weâre going to bring that back,â he says.

Though a concrete timeline is not available, Vetri estimates a minimum of nine months to a year before the doors open.

In the meantime, Vetri stays busy with his own charity foundation, Vetri Foundation for Children, which prepares healthy, family-style school lunches for inner city students and has been transforming cafeterias in Pennsylvania during the past three years. The foundation is also responsible for work with the Alexâs Lemonade Stand Foundation and the annual Great Chefs Event, a glitzy, celebrity-studded food event that raises hundreds of thousands for the charity each June.

With the busy year ahead, is there anything more on the horizon for this ever-active chef? âThereâs always irons in the fire,â he says, and though nothing is âlocked in yet,â he says there are always discussions about the future.

As far as whether other city chefs will branch out to South Jerseyâs changing culinary landscape, Vetri is unsure but hopeful that others will follow.