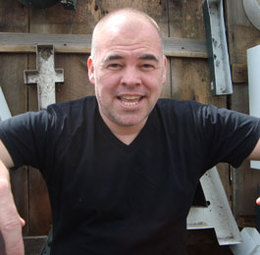 From Haddonfield to Hollywood

Matthew Quick knows a thing or two about living your dreams. And he also knows what can happen when you donât.

Thatâs why seeing his debut novel, The Silver Linings Playbook, come to the big screen later this month will be especially sweet for the former Haddonfield Memorial High School English teacher.

âThinking you can do something and then realizing youâve actually done it â¦ it can be hard to wrap your head around,â Quick said recently by phone from his Massachusetts home. âThis is a tremendously exciting time for me.â

Itâs been an interesting journey from the halls of Haddonfield Memorial to the unfinished New England basement where he spent months writing the bookâto perhaps the red carpet if the film version of Silver Linings Playbook lives up to the increasing pre-release Oscar buzz.

Growing up in Oaklyn, the 38-year-old Quickâdubbed âQâ by his studentsâstarted writing fiction as a teenager and became enthralled with classic novels such as Hemingwayâs The Old Man and The Sea and A Tale of Two Cities by Charles Dickens: âI came to realize at a pretty young age that these people were speaking a language that I wanted to speak.â

After graduating from CollingsÂ­wood High School in 1992, Quick headed to LaSalle University, where he majored in English/secondary education. Upon graduation, he worked at the Bancroft School in Haddonfield, mostly with kids diagnosed with autism and brain traumaâan experience that would later influence his fiction writing.

The personable Quick spent one year teaching at Eastern High School in Voorhees before joining the teaching staff at Haddonfield Memorial.

âI thought being an English teacher would be easy and afford me time to write, but little did I know that, to do it right, itâs one of the hardest jobs in the world,â Quick recalls. For the next six years, Quick taught 10th- and 12th-grade English, becoming a well-loved staff member and finding a niche working with high school kids.

âI coached basketball; I co-ran trips to South Americaâeverything you could do as a teacher, I did,â Quick says. âI was involved in all kinds of activitiesâI would go into school at 6:45 in the morning and sometimes wouldnât get home at night till 10:30 p.m. The writing was becoming more of a dream than a realityâI was just so busy.â

Over time, Quick says, he started to feel like he was âplaying a roleââone that left him feeling like âa huge hypocrite.â

âI was encouraging my students to use all their talents, take risks, write, and here I wasâtotally stuck,â he says. Conflicted by his enjoyment of teaching, a desire to âmake a positive impact in the community,â and his longstanding dream of becoming a published writer, âI felt like I was trapped in a prison of my own making.â

Finally, Quick recalls, his wife, (now-fellow published novelist and international bestseller Alicia Bessette) told him he needed to either âfollow his bliss or file for divorce,â because she wanted the old, contented Q back.

âShe said, âWhat would you do if I could make these problems go away? Would you quit your job and write full time?ââ Quick recalls. âI said, âSure,â but I figured that was impossible.â

Instead, the couple quit their jobs, sold their Haddonfield house, and traveled to South America and Africa before relocating to New England, where they lived with Aliciaâs parents for three years in a move to save money and free up Quick to become a published writer.

During that time, he earned a master of fine arts degree in creative writing from Goddard College in Vermont and spent the bulk of his free time holed up in his in-lawsâ basement, where he wrote seven days a week for months on end.

âIt was a rite of passage, to be sure,â Quick says, adding that the decision to make a change was inevitable: âThereâs that thing inside of you that you have to follow at some point or the best part of you will die, and I knew that.â

One day, when taking a jog, Quick noticed a beautiful silver lining around a cloud.

âI took it as a good omen, then started thinking that was ridiculous,â he remembers. âBut it stayed with me and I thought, âWell, whatâs wrong with believing itâs an omen?ââ From there, The Silver Linings Playbook got its start.

âIn a way, writing the book was like going homeâI was able to use Philly and South Jersey as a backdrop and create characters like the ones I grew up with,â says Quick.

Published to rave reviews in 2008, the book tells the story of Pat Peoples, a 30-something trying to rebuild his life after several years spent in a psychiatric facility. Pat has a theory that his life is a movie produced by God, and that if he becomes physically fit and more emotionally stable, God will ensure him a happy endingânameÂ­ly, the return of his estranged wife. Things donât turn out quite as Pat has planned, but he does manage to attain a happy ending of sorts, even if his beloved Eagles keep losing.

The Silver Linings Playbook was optioned as a movie before the book was even published, something that left Quick âkind of feeling delusional.â

âAfter I got off the phone, I was like, âDid that really happen?â I couldnât get my head wrapped around it.â

Quickâwho spent one day on the set of the filmâclaims to be very pleased with David O. Russellâs adaptation.

âIf you filmed my whole book, scene by scene, it would be an eight-hour movie, but they made it work in two hours,â Quick says. âDavid was very respectful of what I was trying to do and he did a great job. Iâm extremely pleased with the end result.â So are the critics, who are buzzing that the filmâwhich opens on Nov. 21 and stars Robert De Niro, Jennifer Lawrence and Bradley Cooper (as Pat)âis decidedly Oscar-worthy.

In addition to The Silver Linings Playbook, Quick has also written three young-adult fiction books. âI resisted that at first, but because I worked with young people for so many years, my agent thought I would have something to say. Iâve discovered itâs a way for me to almost teach again,â says Quick, whose latest young-adult book, Boy21, came out in March. To coincide with its publication, Quick spoke before a packed auditorium at his alma mater, Collingswood High School, something he found âvery rewarding and very welcoming.â