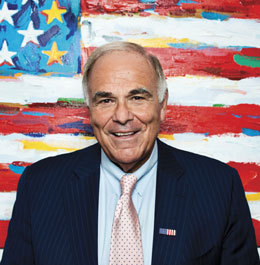 Ed Rendellâs plan to get America back to being a nation of risk-takers unafraid of doing âbig, bold thingsâ

The fire in his belly burning hotter than ever, Ed Rendell simply refuses to go gently into that good night.

Whereas some politicians step quietly into the background after their terms expire, Rendell has remained very much in the public eye, jamming his schedule overfull with jobs, causes and interests that suit his style. In truth, heâs likely just as busy now as he was as Philadelphiaâs district attorney or its beloved mayor or, most recently, governor of the Keystone State.

These days, this part-time Ocean City resident fills his calendar practicing law with national firm Ballard Spahr, analyzing politics for NBC and Eagles games for Comcast SportsNet, co-chairing Building Americaâs Future, which is an organization devoted to strengthening the countryâs infrastructure in urban and rural areas alike, and, of course, trying to ignite a revolution that would get America back to taking risks, making tough decisions, and speaking its mind.

Helping the nation rediscover its boldness is one of the main reasons he wrote the recently released A Nation of Wusses: How Americaâs Leaders Lost the Guts to Make Us Great. (âFor a book that has no sex and no violence,â he says, âitâs doing very well.â) The title of the book stems from an incident in December 2010, when a football game between the Philadelphia Eagles and the Minnesota Vikings was canceled due to a looming snowstorm, long before a single flake had fallen. Afterward, an incredulous Rendell rather famously proclaimed that America was becoming âa nation of wusses.â

He may be right, but itâs not too late for us. South Jersey Magazine recently sat down with the 68-year-old Rendell to discuss how Americaâand, more so, its leadersâcan get back its boldness, his next move, and, of course, his take on the Eaglesâ Super Bowl chances this season.

SOUTH JERSEY MAGAZINE: The bookâs title is as provocative as the statement that gave birth to it, after the so-called Eagles Game that Never Was.
ED RENDELL: I had never heard of canceling a football game for bad weather. The San Diego Chargers in the â70s played a game at Cincinnati for the AFC championship and the wind chill was minus 63 degrees and they still played the game. The Eagles in 1951 played for the NFC championship against the Cardinals in an 11-and-a-half-inch blizzard. Nobody even thought of canceling the game, and [halfback] Steve Van Buren, who was the equivalent of Tom Brady at the timeâ he was the star Eagles player and the star of the NFLâhe took two trolleys and a bus to get to the stadium in time to play the game. And I thought to myself, if this was Green Bay or Minnesota or even Pittsburgh or Buffalo, people would say, âWhat? They canceled the football game?â It bothered me, but when I reflected on it for a second, I realized that it sort of became a symbol of whatâs happening to us as a country.
One example I gave was our relationship with China. Iâm all for free trade â¦ but China has without a doubt manipulated their currency to give Chinese businesses a huge advantage over American businesses. They have stolen our intellectual property, and the Chinese government has done nothing to police that. They dump product in the United States to undercut our businesses and drive them out of business so they end American competition, and we donât do anything. We say, âPlease stop.â And the answer is, âWe canât do anything because they own all of our debt.â Well, of course thatâs true, but we buy most of their product, and if we stop buying their product, their economy would go into the crapper in four months. So we have as much leverage on them as they do on us. Itâs time to stand up and say, âNo more currency manipulation. If you continue to do it, youâre not going to send product into the United States.â We just donât have the backbone to do that.

SJM: When did this âwussificationâ start occurring?
ER: It happened with the advent of 24-7 media, because every act is reported almost instantaneously. Whereas the media used to report the news, the media is now in the opinion business, and the opinions are sledgehammers. Youâve got right-wing opinions, progressive opinions, and anyone who wants to get together and do some things that are risky but necessary gets the [stuffing] kicked out of them. Thereâs an inability to do anything thatâs risky at all. The reason this is so poignant is that this nation was built by risk-takers. We were a bunch of shopkeepers and farmers who had the audacity to think we could take on the greatest army and navy in the worldâthe Britishâand we knew what the consequences were; the men who signed the Declaration [of Independence] knew that if we lost, that they would be hung, and yet they did it. They were the ultimate risk-takers. We were risk-takers when we built the Erie Canal, when we built the Hoover Dam, when we built the railroads and the interstate highway systems. We were risk-takers, and we did big, bold things. JFK took a huge risk when he said weâll put a man on the moon before the end of the decade. My favorite Kennedy quote was when he made that announcement, he said, âWe do these things not because they are easy but because they are hard.â So this nation of risk-takers has turned into a nation of wusses. And I donât mean the people, necessarily. We also donât respect the intelligence of our people. â¦ We donât have the courage to tell people the truth.

SJM: So what can we do about it?
ER: After the election, whoever is the president elect has to lead and say, âLook, the only way weâre going to meet the challenges, the only way weâre going to get through it without falling over the fiscal cliff, is for us to take bold steps, which involve taking risks and ticking people off, but Iâm going to lead and Iâm going to take most of the weight and you guys follow and do the right thing.â

SJM: Your ânation of wussesâ comment probably got more press than the canceling of the game. Were you surprised?
ER: I had to laugh. I quoted a Daily News reporter, Will Bunch, who ran a story about it the next day, and [his story] basically supported what I said. He said, âIf this was China, 65,000 Chinese would have walked to the game doing advanced calculus as they walked.â I repeated that quote and newspapers in Shanghai and Beijing quoted me, saying it was my quote, but I was stunned to think that a comment about a football game would wind up in newspapers in Shanghai.

SJM: For those of us who havenât gotten to the book yet, what takeaways do you think people will come away with after reading it?
ER: I wrote the book for three reasons. First, particularly for young people, I wanted to communicate that although public service is very difficultâitâs low pay, bad working conditions, youâre scrutinized all the time, often youâre in canât-win situations, itâs highly pressurizedâ despite all those things, itâs a wonderful way to live. Your work product, your talent and your energy is going into changing peopleâs lives on a daily basis. I hope it would inspire people not just to run for office but to work in government, to work in nonprofits, to put themselves in a position to get that feeling.
The second reason I wrote the book was to debunk this idea, which has gained ground politically, that government is the enemy, that government canât do anything right, that the best government is the least government, that we donât want the government spending money. Using myself and others as an example, government, when itâs targeted and effective and cost efficient can do wonderful things to help peopleâto create opportunities, to protect the most vulnerable citizens, to promote growthâand I think I demonstrated how I did it and how other people along the way have done it.
The third takeaway is that, yeah, we need leaders who are going to have the courage to start taking some risks and not worry about protecting their own job, and thatâs an important part of breaking the stalemate and the logjam that exists not only in Washington, D.C., but in most state capitals. For usâwe the peopleâwe need to continue to reinforce and support those politicians who do take risks. We canât expect them to be risk-takers if we punish them for every risk that they take that doesnât pay off. Itâs almost like we the people have to give our leaders permission slips to take risks.

SJM: Whatâs the biggest lesson you learned from your time in politics?
ER: Hopefully you learn from your mistakes. My biggest mistake was the one time I wussed out when I agreed with the legislature to give them the pay raise [in 2005]. They had threatened me that if I didnât sign the bill that they would never pass anything I was interested in again, and I had five years ahead of me. I should have realized it was a bluff, and I should have called their bluff, and I didnât. Lesson No. 2 I learned, and maybe this is just my style of management, but itâs very important for the person in charge to be involved in everythingâone, because the person in charge usually gets to be in charge because they have a level of talent and experience; two, because in the end, youâre going to take the hit for it no matter what.

SJM: You and Philadelphia are almost synonymous, but I understand you have strong South Jersey ties as well.
ER: My wife [Marjorie] and I own two properties in Ocean City, and weâve been going down there for four decades. We love South Jersey and we love the Shore, but I also love Voorhees and Cherry Hill and Camden County; theyâre part of Philadelphia. Iâve seen when Iâm in other cities, Iâll meet someone from Cherry Hill and Iâll say, âWhere are you from?â And theyâll say, âPhiladelphia.â Weâre one big metropolitan area. There are as many diehard Eagles fans in South Jersey as there are in South Philadelphia.

The only two jobs I would leave what Iâm doing for would beânot necessarily in order of importanceâbaseball commissioner, which in some ways is my dream job, and secondly would be if Hillary [Clinton] runs in 2016, I would be her campaign manager and I wouldnât charge her a dime. And then if Hillary got elected, I might consider doing something with her in D.C., but thereâs no certainty sheâs even going to run.