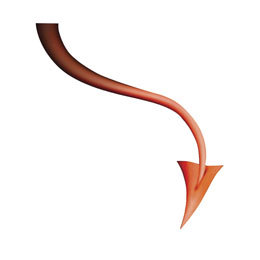 The Devilâs in the Details

For centuries, the Jersey Devil has been part of local folklore.

On first impression, it was big. With muscular hind legs almost like a stag, until you account for the face. And wings.

âIt didnât look like a horse; it looked like it had a snout that was shorter, almost like a person,â says Rivertonâs Alex Staniszewski, recounting his first and only encounter with the legendary Jersey Devil back in 2003.

Staniszewskiâs eighth-grade class trip led him to Mount Misery, a secluded camp in the Pinelands, where he and a group of six boys went hiking alone on a winding, hilly path.

âWe stopped for a minute (near a small hill) to see where we were going,â he continues. âOut of the corner of my eye, I saw a thing moving around out there, just briefly saw an outline of what it looked like. The back end of it looked like a deer or a horse, or something like that. But as you get closer to its head, it started getting bigger. Big, broad shoulders; what could have been wings. The head was big and furry.â

By the time the boys could get a closer look, it was gone and they ran all the way back to camp.

Many have searched, through largely undisturbed wooded acres and ominous swamps, to catch a glimpse of this mysterious, centuries-old creature. The Pine Barrens, a beautiful stretch of roughly a million rural acres of mostly undeveloped land, play host to dozens of tales about the Jersey Devil, each more fancifulâand unbelievableâthan the last.

Still, some folks keep looking, because around every gnarled old oak tree or abandoned structure in a field, there lays the possibility of uncovering a legend.

From shrouded beginnings
Though the legend of the Jersey Devil is as varied as it is peculiar, most stories date back to the 18th century and most commonly to a night in 1735, in a small town called Leeds Point. Depending on whoâs telling the story, a weary local woman named âMother Leeds,â or Mrs. Shrouds, was preparing to give birth to her 13th child. Rather than welcoming a bouncing baby boy, the fated mother delivered something more sinister.

Dave Juliano, of the highly-active South Jersey Ghost Research group, explains that the pregnant woman was so frustrated by the idea of another baby, she wished if âshe ever had another child, (that it would) be a devil,â and thus âher next child was born misshapen and deformed.

âShe sheltered it in the house, so the curious couldnât see him. On a stormy night, the child flapped its arms, which turned into wings, and escaped out the chimney and was never seen by the family again,â Juliano wrote in an essay he researched and published about the myth.

Eventually, rumors spread about a devilish creature that had spindly wings and sharp claws, a horseâs head topped with horns, and a forked tail. Sightings were reported frequently around Gloucester, Camden and Burlington counties, though occasionally spread further south and as far away as Delaware.

The freakish turn of events came to a climax in 1909 with more than a thousand witnesses claiming to have seen the creature flying across Haddonfield, Collingswood and Moorestown during a two-week period, Juliano says.

Each October, Haddonfield author William E. Meehan Jr. gives the âHaunted Haddonfieldâ walking tour based on his book of the same name, revisiting the monsterâs appearances during that fateful time and how the townspeople reacted.

âIn West Collingswood, firemen spotted the Jersey Devil and tried to squirt it with a hose but couldnât reach it. In Gloucester City, schools and factories were closed because they were afraid. In Camden, the operators of a trolley car armed the conductors with rifles and shotguns to defend themselves from the Jersey Devil,â explains Meehan. âIt was quite the sensation, as you can imagine. It was devil mania.â

Meehanâs extensive research uncovered âa strong Haddonfield connectionâ to the Jersey Devil, as well as a connection to a founding father. âThe story has its origins in the early 1700s, when Benjamin Franklinâs [Pennsylvania Gazette newspaper] reported the witchcraft trial of a woman in Mount Holly â¦ it is believed, but not proven, that Franklinâs reporting of this actual witchcraft trial inspired the stories of the Jersey Devil that followed. Only five years later, Burlington County records show stories of a devil beginning to circulate in New Jersey.â

Meehan believes that trial is what helped capture the popular imagination. The devil has been âseenâ in waves ever since then throughout South Jersey and also across southeastern Pennsylvania along the Delaware River. Some people associate the periodic appearances of the devil as a harbinger of bad things to come; appearances have been reported heavily before wars, he adds.

The legend today
The Pinelands Preservation Alliance, based in Burlington County, has also given walking tours recounting some of the stories that circulated during that time: a creature raiding chicken coops, killing dogs and smashing the roofs of several cars.

âHis presence has been seen and felt by many in at least 50 different towns when he emerges from his natural lair in the Pinelands and wanders throughout southern New Jersey, sometimes intriguing and sometimes terrorizing the residents,â the alliance says.

Through the years, though, interest has dwindled as witnesses and purported descendants of the Shrouds family have passed away. An official research group, The Devil Hunters, documented 41 expeditions into the piney depths of South Jersey, trekking out to abandoned houses and investigating reports of flying creatures all the way up until their retirement from the field in 2009. Yet their findings live on.

âMy cousin and I were sitting at a red light around 10 p.m. on Delsea Drive,â began one Sewell resident who recalled her eyewitness report to the group. âOut of the woods we watched in awe as this âthingâ hopped across the street and into a dark lot.

It was about four feet high, had a long pointed noise almost like a horse or a possum. It ran on two legs or haunches with very small arms, and very pointed ears. I had never seen anything that looked remotely like this in my life. â¦ I had always been the biggest skeptic about these things.â

Yet whatever the evidence for or against the existence of this supernatural being, the Jersey Devil has seeped into our local and national pop culture, spawning numerous ghost hunting shows, spooky made-for-TV movies, a PlayStation video game, and even the name of the professional hockey team up north, the New Jersey Devils.

Steven Tettamanti, acting director for The New Jersey Historical Society, says residents have been curious about the myth for ages, though interest perks âback up every now and then,â typically around Halloween.

âEvery once in a while, we get a phone call about it. There was a TV show just a few months ago called Supernatural (on the CW), where these two brothers would go solve supernatural things,â says Tettamanti. A recent episode involved the brothers investigating a string of campground killings linked to the Jersey Devil, which Tattamanti felt was âinteresting because it got some national exposure â¦ though they curtailed (the history) to fit their story.â

Though there are no current historical exhibits on display in state museums, the Jersey Devilâs presence can be felt far and wide. âWhen you drive down the Shore to visit Cape May, itâs all around. The story is all about the Jersey Devil living in the Pinelands.â

As for Staniszewski, he says he never went back to search for the creature that spooked him nine years ago, and he rarely tells the story due to dismissive responses. Most people just donât believe him.

Either way, he says, âItâs just kind of fun to just seek that stuff out. Any time you go out into the Pine Barrens, you kind of hope to see something, just for the story.â