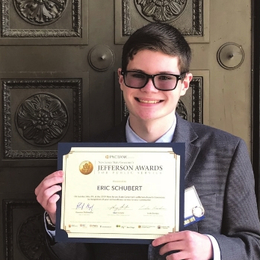 If the Genes Fit
Eric Schubertâs passion for genealogy has taken him from tracking down family members to criminals.

Picture a typical 8- or 9-year-old who is home sick from school. Even before there was a tablet in every kid’s hand, most would spend their days watching cartoons while recovering. Not Eric Schubert. Instead, the Medford native found himself tracing his family tree, and now, on the verge of his 20th birthday, Schubert is reflecting on more than a decade as a genealogist.

The childhood interest inspired a business, ES Genealogy, where he helps others discover their own ancestry, and has even put Schubert in the throes of solving cold cases. South Jersey Magazine spoke to the Elizabethtown College sophomore about how his journey began and where his path may be heading.

Q&A
South Jersey Magazine: You’ve said your interest in this subject came about when you were out of school  with pneumonia. How did that happen?
Eric Schubert: When I was younger, I would inevitably come down with pneumonia every winter and would miss school. While home I was bored and would annoy my mom—in a good way—and one day she saw a commercial for one of the genealogy sites like Ancestry.com and suggested I try that to use up my time. I was about 8 or 9 at the time and I thought it would be a quick thing, but a month turned into a year and that turned into 10 years. It’s all been very unexpected.

SJM: How much of your own family tree have you been able to trace?
ES: On my mom’s side, I’ve been able to trace her family back to New England in the  1700s. I could probably go back further but I practice conservative genealogy where I don’t want to go back too far because it might not be right.

SJM: What made you want to help others trace their own roots?
ES: As I was going into high school I was at that age where it was pretty much time to get a job but I was too lazy to do the jobs that most teenagers do. I’m not sure if it was me or my mom who thought of asking residents in the local community if they wanted to research their family tree. We didn’t think there would be a lot of interest, but we quickly realized we underestimated the interest. So I started parttime just helping people in the community of Medford and Medford Lakes.

SJM: What are people mostly interested in finding out?
ES:  There is a broad range and that’s what’s so fun about this. I never know what the next email will be about. Most people want to know their nationality and family tree, and a lot of people want to prove their connection to a prominent historical figure. But 99 times out of 100 I end up disproving the connection.

SJM: You’ve also been able to help connect people with their biological family. What have been some of the most memorable moments for you so far?
ES: Yeah,  the advent of genetic genealogy with at-home DNA tests was another one of those things that I picked up on and added to my repertoire. I never  thought I would help adoptees connect with birth parents.

There have been some funny connections. You know how there is always the cliché joke about someone’s father being the mailman or milk man? Well ,  both of those happened. For the mailman, I had it narrowed down to these two men and when I told the client, she said one of them was her childhood mailman and a friend of her mom’s. I told her, “ Well, I think they were more than friends.”

Another case was a woman’s biological father turned out to be her godfather whom she had always loved as a father figure and she thought it was just the best news that it turned out to be him. That’s just a small sample but there are definitely some crazy DNA stories I’ve dealt with.

SJM: DNA testing has been used to solve some  major crimes, such as the Golden State Killer. What did you think as you saw that unfold?
ES: It was something I had been reading about and just thought it was so cool to see this technology that I use every day being used to end up on a killer, as opposed to a birth parent. I always thought it would be something I wanted to get my hands into.

SJM: And then, by some twist of fate, you were contacted by a detective from Montgomery County, Pennsylvania, asking you to help with a cold case.
ES: I  actually ignored the email for a few days when I got it. I was barely 18 and I just had no idea about any facts in the case, was it a murder? I t’s something you think you want to do but then when you’re asked, you just aren’t expecting it. But the more I thought about it, if they were asking an 18-year-old, then they must have a need. So I took the case and figured it out in two weeks.

SJM: Do you think that experience will lead to other involvement with law enforcement?
ES: After solving that case I realized I could actually pull this off and it would be really cool to explore this new topic. There could potentially be genetic information that just needs to be looked into and that could be me. Right around the beginning of quarantine last year, I reached out to about 100 police departments around the country, introducing myself and offering to pick up cases they might have lying around. I now have about a half dozen cases on my plate.