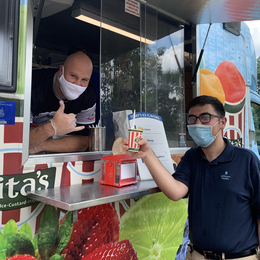 
by South Jersey Magazine
Health care workers from across the region have been celebrated for their dedication and tireless efforts during the COVID-19 pandemic. Whether it’s been the large amount of food being delivered to hospitals, drive-by parades or the countless lawn signs thanking them for all they do; they have been rightfully recognized as the heroes they are. More recently, some pretty notable names joined in to show their support for the medical community which resulted in some unforgettable experiences for two local health care systems.
County superstar Tim McGraw surprised a group from Virtua Marlton’s nursing staff when he crashed their virtual staff meeting on Zoom. The Grammy winner appeared as part of a Spotify series called “The Drop-In,” and he spent a few minutes thanking the front-line workers for their selflessness and for the example they are setting for his three daughters. McGraw then broke out into a mini-concert and performed a song from his forthcoming album Here on Earth, which will debut later this month.

Meanwhile, Eagles pro bowler and head of the “underdogs,” Lane Johnson decided to thank health care workers at Jefferson Cherry Hill Hospital by serving them water ice. Johnson also signed plenty of autographs and posed for pictures with staff members. The offensive lineman summed up the experience on his Twitter page, saying, “Had fun surprising our real heroes at Jefferson Health … Love supporting this community!”
Click here to subscribe to the free digital editions of South Jersey Magazine.
To read the digital edition of South Jersey Magazine, click here.