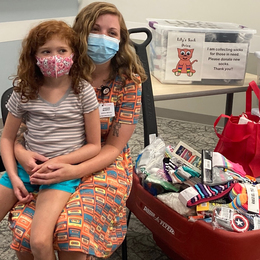 
by South Jersey Magazine
Lily Cuticchia
This 6-year-old Haddon Township resident made news when she collected nearly 1,200 pairs of new socks for patients at Cooper University Health Care, where her mother, Jordan, works in the addiction medicine department. Inspired by her mother’s job, Cuticchia wanted to do something special to help patients and in a month’s time, with the help of family and friends, she was able to donate the large amount of socks to the health care system. Cuticchia will be heading to second grade in the fall.
Melonie Johnson
Johnson is the new president and chief operating officer of Borgata Hotel Casino and Spa in Atlantic City. Her career in gaming and hospitality spans more than two decades and she is the first Black woman to run a casino in A.C. A native of Louisiana, Johnson has been with MGM Resorts—Borgata’s parent company—since 2015 and recently served as president and COO of MGM National Harbor in Maryland. She is a mother of six and grandmother to five.
Jake Minnick
Minnick, like numerous people who have seen images from the crisis in Yemen, was appalled at the conditions many in the country are facing due to the conflict, particularly children. The only difference is he was inspired to do something about it. A rising senior at Washington Township High School, he started a fundraising campaign through GoFundMe. In a short time he has already raised $700 toward his $1,000 goal, with the proceeds to be donated to UNICEF to help those in need.
Vai Sikahema
After more than two decades at NBC10 as both a sports and news anchor, Sikahema will be retiring from the station this November. During his 26-year media career he won two Mid-Atlantic Emmy Awards and was a 2013 inductee into the Phialdelphia Broacast Pioneers’ Hall of Fame. Sikahema resides in Mount Laurel and is also well known for playing eight seasons in the National Football League, including a stint with the Philadelphia Eagles at the end of his playing days.
Lilian Smith
Heading into her freshman year in college, this Merchantville native and Camden Catholic graduate was recognized by the National Society of High School Scholars (NSHSS) with the organization’s Earth Day Scholarship. With interest in art, the environment and social justice, Smith completed a citizen science project that examines the efforts that communities can take to help combat climate change. In college, she plans to study architecture and urban planning with a focus on ecological importance in urban settings.
Justin Arabia
After 13 seasons as an assistant coach for the Rowan University football team, Arabia is getting a chance to run his own program. He was recently approved as the new head coach at Cherry Hill West, replacing Brian Wright, who moved on to Timber Creek after a successful eight-year run in which he led the Lions to a 38-41 record and the only two playoff appearances in school history. Arabia, a Haddon Township graduate who now resides in Deptford, filled several roles at Rowan, including wide receivers coach and video coordinator.
Click here to subscribe to the free digital editions of South Jersey Magazine.
To read the digital edition of South Jersey Magazine, click here.