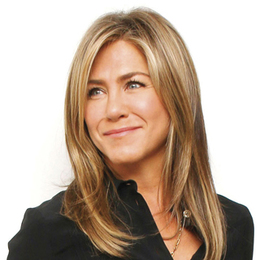 In a Good Place
After decades in the spotlight, Jennifer Aniston is staying true to herself.


by Evan Jameson
For those of us who have followed Jennifer Aniston over the years, she epitomizes one of the industry’s most curious juxtapositions—an actress so often represented on screen by bubbly, buoyant, energetic and humorous antics, yet someone who, away from the flashbulbs and the premieres has found the challenges of settling down and finding the right partner slightly more challenging. It follows then, that one of the actress’ biggest frustrations has been her inability to start a family, and that is a tale that rumbles on in the life of someone who, seemingly, has everything else, including an estimated $300 million fortune.
On the subject of children, Aniston has often admitted to being “fed up” with the incessant and clearly unfounded reports about her being pregnant. Indeed, she even issued a public denunciation (via a letter to The Huffington Post) of the media’s intrusive behaviour and the kind of “unfair” shaming that takes place with respect to women who for whatever reason remain childless “as if you’ve failed yourself as a female.”
And speaking at the 2016 Giffoni Film Festival in Italy, Aniston took matters a step further by urging women to stand up for themselves in supporting one another: “The world is starting to realize that women are not only clothes, makeup and selfies,” Aniston said. “Sometimes we as women are our own worst enemies and that’s why we have to support each other. When I was a teenager I grew up with a great circle of friends who always supported me and were like family to me. As women, we should accept every aspect of ourselves and embrace ourselves for who and what we are, including our faults. That will make you strong.”
Public statements aside, what the 51-year-old also retains is the rare ability to enchant and engage an audience some 25 years after she first appeared on the scene. Numerous careers have been and gone in a fraction of that time, yet Aniston’s girl next door image has carried her through generations, genres and a crossover from comedy into more serious roles with flowing ease.
Now entering a new phase of her career with the success of TV drama projects, she has an almost nagging acceptance that these are the rules of the game. And if that is so, she continues to play out the drama with a shrug, a smile and the unerring ability to deliver a devastating rebuke to any journalist question that strays off-track… albeit, she will follow it with a laugh and smile.
A jewel in Hollywood’s horribly tarnished crown, she’s been in the spotlight recently thanks to her role as Alex Levy on The Morning Show, a drama that streams on Apple TV+ and co-stars Reese Witherspoon and Steve Carell. She’ll also be taking part in The One Where They Got Back Together, the hugely-anticipated Friends reunion. All of the original cast members have gathered for this nostalgic special, though production has been temporarily halted because of the COVID-19 pandemic.

You seem very comfortable in who you are at this point in your career.
You’re so careful and controlled in your 20s, and you’re just more aware of your every move. Now, I think there’s just more of a freedom and a comfort, and none of it really matters, as long as you’re enjoying yourself and having a really good time. Not hurting other people—of course, that goes without saying. I think that’s what’s great about these comedies is that there’s no apology.
Women in their 50s seem to have earned a new kind of respect. How do you feel about it?
I’ve never had a problem with that. I’m so much happier with how I feel about myself and things in general and about where my life is going now than I was when I was in my 20s or early 30s. I have an inner peace and calm that has guided me over the years—it’s really valuable to have that, even if it takes a while to find it.
I’ve never really thought about age, just like I’ve never thought too much about health or fitness or image. I find that those are the things the media talk about, whereas all I’m concerned about is wellbeing and being happy.
It’s not that I don’t consciously want to consider those things, but in my head I just get on with me being me. I can’t afford to spend every waking moment wondering what my body looks like … what’s the point?
You’ve had to deal with an enormous amount of media attention over the years, yet you’ve always maintained a pretty calm and cool attitude. How have you managed not to let yourself get caught up in all the hype and speculation?
[Laughs] Practice! You learn that you can’t get upset about what’s written about you. You’d go nuts. I’ve always had a certain amount of inner strength and confidence that gives me a level of immunity. There’s no point in becoming angry or bitter about things that go wrong in your life or what’s reported about you. You can only control what you do in your world and that’s the only reality you should think about. I’ve also been lucky to have great friends who I can talk to if I’m ever down or worried and who are there for me.
The main thing is to live each day as it comes and just imagine all the wonderful things that can happen to you as long as you’re open to enjoying your life and thinking creatively about what you want to do.

Five things you may or may not know about Jennifer Aniston
Although she is best known for her role as Rachel Green in Friends, she was originally cast to play Monica Geller and had to persuade the producers to let her swap with Courteney Cox. Aniston won an Emmy, a Golden Globe and a Screen Actors Guild Award over the course of the sitcom’s run.

She received $1million each episode for the last two Friends seasons, which made her the then highest paid TV actress of all time, along with her female co-stars Cox and Lisa Kudrow.

Anniston was a pupil at progressive education centre Rudolf Steiner School in New York. Despite being the class clown, she had a painting exhibited at the Metropolitan Museum of Art when she was only 11 years old.

Before her big break, she worked as a bike messenger and in telemarketing. During 1987, she was a waitress at a burger bar in Manhattan called Jackson Hole.

Her father’s best friend, Telly Savalas, was her godfather. Anniston herself is the godmother of Coco Riley Arquette, daughter of Courteney Cox and David Arquette.