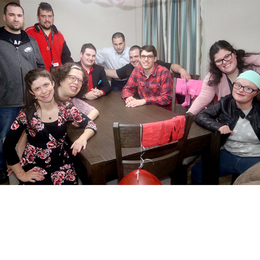 
by Matt Cosentino
Like any parent of a special needs child, Mike Byrne often worries about the future.

His daughter Kelsey, 28, was born with a developmental disorder called Williams syndrome. Although she is small in stature, her endearing personality can captivate any room she walks into; but her condition also comes with several learning challenges, especially in the form of numbers, perception issues and following directions.

For that reason, Kelsey has always lived with her parents—and until recently, the family had no reason to think that would ever change.

“The prayer of a special needs parent is that our children live a long and happy life, but that we as parents live one day longer because we have to be there to take care of them,” Byrne says. “But we all know that most of us won’t live longer, so the question is, ‘What do we do?’ The JEVS program is a godsend to parents because this is what we think about all the time.”

That program is called Independence Network and it is run by JEVS Human Services, which is headquartered in Philadelphia and helps those with disabilities in a variety of ways. Byrne was instrumental in working with JEVS to bring Independence Network to South Jersey after seeing the success of its inaugural location in Narberth, Pennsylvania.

Independence Network offers adults with disabilities the opportunity to live independently on their own with ongoing support and services from JEVS professionals. The South Jersey program, located in Collingswood, welcomed its first two residents last August and is now up to 10, with plans to move up to 25 quickly.

Kelsey will be moving into an apartment this spring with a roommate, and both she and her parents are excited about the possibilities of living in a safe, walkable town.

“The most important thing is within five blocks of each other they’re going to have 20 friends,” Byrne says. “My daughter has already been involved socially with everybody there. She recently told me, ‘For the first time I feel like I have friends, and not just people connected to you or Mom. They’re truly friends of mine.’”

The tight-knit group of friends will often walk around Collingswood visiting restaurants or shops together, and they are constantly hosting each other at their apartments for dinners, game nights and birthdays. They even had a Super Bowl party this year.

Shawna Dedonado, 24, joined JEVS Independence Network in October and the social aspect is one of her favorite parts.

“The program is awesome; I love it,” she says. “I like the different social activities that we do, and we do a lot of them. For example, we’re going to Philadelphia soon, we have a pizza party planned, we’re going ice skating this weekend. It’s pretty eventful.”

Zack Pastore, 23, joined in October and felt a lot of emotions when moving out of his mom’s house in Freehold.

“I was excited, I was nervous, I was confident. I was just looking forward to a new opportunity,” he says. “Collingswood is a great town. What I love about it is it’s easy to get around and everyone is so nice.”

JEVS Independence Network assists with finding and retaining jobs and taking the necessary steps for advancement. Pastore works as a host at Famous Dave’s in Cherry Hill, while Dedonado works in child care for a local gym and volunteers at a retirement community. With so many employment opportunities in town, many people can walk to their jobs, but the PATCO Speedline is also used by those who have farther to travel.

The JEVS staff also helps residents get adjusted to living independently by teaching skills such as cooking healthy meals, doing laundry and cleaning their apartments. Most parents are close by in South Jersey should they be needed, but there is also a 24-hour support service in case of emergencies.
“I was nervous at first; I’ve been with my mom my whole life and it was hard leaving,” Dedonado says. “But they give you a lot of support in the program. They come over several times a week and help me clean my place and make sure it’s nice and tidy. We have group cooking and individual cooking nights, which they help with, along with grocery shopping. They also help me figure out my money for the week ahead of time.”

Shawna’s mom, Debbie Pilzer, believed her daughter was ready to live independently and is pleased to see her thriving.

“I’m not far from Shawna, but she’s been learning to use the resources she has first and then me second,” she says. “It used to always be me first, so JEVS has been really helpful for me as a parent. It takes a lot of pressure off me.”

Interested parents are encouraged to attend an upcoming information session on the program on March 16 from 10 a.m.-noon at First Baptist Church of Collingswood. Whether they end up speaking to other moms and dads or members themselves, they will find the Independence Network comes highly recommended.

“This program is amazing. We have a fantastic director and everyone who works for the program is great,” Pastore says. “Anyone who is interested in joining JEVS should do it. It’s so worth it.”