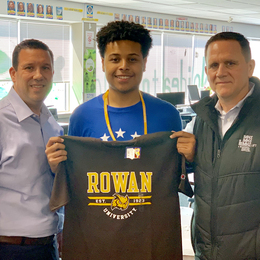 Names To Know
Local people achieving big things in South Jersey and beyond.


by South Jersey Magazine
Amir King Jr.
King is the first recipient of a $200,000 MHS Lift Scholarship Fund, which will support his education, room and board and book costs at Rowan University. In order to receive the scholarship, the Camden student had to be a member of the Boys & Girls Club of Camden County and a full-time resident of the state with demonstrated financial need.
Shane Billow
Billow shows great dedication to martial arts and has made many achievements this year alone. He is currently ranked No. 1 in four of his divisions on the international NASKA martial arts circuit. The Marlton eighth grader acquired six Grand Championship titles and won the Overall Forms Grand Champion title. He has achieved all of this while receiving his first degree black belt and upholding honor roll at school.
Sam Sorid
The Lenape High School alum put on her second Move for Mental Health event, which included 25- and 50-mile routes along with a one-mile walk. Sorid has a passion for both cycling and mental health awareness, having been diagnosed with obsessive-compulsive disorder, and this year’s charity bike ride benefited the Evesham nonprofit King’s Crusade, which helps individuals struggling with addiction.
Mark Bodrog
Bodrog is a Marine captain and infantry officer who wrote and published a play titled 22 A Day: A Tragedy in Three Acts in May. The play is based on true events and experiences from the Gloucester Township resident’s life in the hopes to raise awareness of PTSD and high suicide rates in the veteran community. Bodrog previously wrote the memoir Second Platoon: Call Sign Hades.
Chip Tagland
Cherry Hill resident Tagland received the Nurse of the Year award at Deborah Heart and Lung Center and feels extremely honored that his peers would nominate him for the award. Tagland, a nurse in the medical intensive care unit and charge nurse, was also recognized by the hospital along with other top nurses at a special ceremony during National Nurses Week.
Mahawa Bangoura
Bangoura moved to Voorhees from West Africa when she was 7 and learned how to read and write in English. When she got to fifth grade, she wrote her own book titled Changes; and years of editing, the Voorhees Middle School student’s book is now published. Taken from personal experience, Changes follows a girl who loses a parent and the challenges she faces through life.
To read the digital edition of South Jersey Magazine, click here.