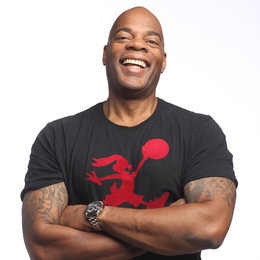 Quick Wit
Whether heâs flying toward a standup gig across the country or chewing up asphalt on one of his motorcycles, Alonzo Bodden stays in constant motion.


by Bill Donahue
“If I’ve offended you, I’ve done my job.”
So says Alonzo Bodden, a standup comedian probably best known for being a panelist on the NPR news quiz Wait Wait … Don’t Tell Me!, heard locally on Philadelphia’s 90.9 WHYY-FM.
Although he says offending people isn’t too difficult these days, his primary goal in life is to make people laugh.
“Comedy is getting really difficult; you’re supposed to create a reality that is funnier than the one we live in, but that has become close to impossible,” says Bodden. “Probably the greatest compliment I’ve received was when Playboy magazine did a thing on George Carlin, and they listed me as one of the spawn of Carlin. George would never apologize for a joke, and I am not going to either.”
During a recent interview, he shared his thoughts about everything from his love of motorcycles to Rodney Dangerfield’s bathrobe. Bodden’s latest gig is host of Family Feud Live, a celebrity edition of the popular game show touring the country this spring, including a stop at Harrah’s in Atlantic City on June 1.
You’re probably best known as a voice on NPR’s Wait Wait … Don’t Tell Me! Is working on that show as much fun as it sounds?
Absolutely. What I love about it is the originality. I never know what the questions are, and I always have a good time. The fans of Wait Wait are very interesting people; it’s like they grew up being nerds and now they’ve all come together. They take a while to accept you, but once they do, they’re great fans. … I think my favorite moment was when I met a woman after the show, and she told me, “You sound fat on the radio.”
Being known primarily by your voice must be an interesting level of fame— all of the benefits without the infringements to your personal privacy.
I always appreciate being recognized. When more and more people recognize you by your voice, the more people know you by something, you often find yourself in situations of high recognition—but you also have to respect that there may be problems that go with it. I’m famous enough to have an idea of what it’s like to be famous. … I’ve always felt that if you’re famous to the point where people can bother you, then you can afford to go places where people don’t bother you. I also think the nicer a famous person is to other people, the more likely people are to leave them alone. In the ’80s, Magic Johnson might show up anywhere—a movie theater, a 7-Eleven, playing basketball at Venice Beach. He’s the guy who would take the time to dribble a ball with a little kid. I also remember being on a flight with Sinbad, and after the flight he stayed up at the front of the plane, shaking hands with anyone who wanted to shake his hand. I think people respect that level of openness, but they’re also more likely to let you have your personal space after the fact.
Considering your appearances on Wait Wait and all the standup dates you do, it seems you’re always on the road somewhere. Do you still like traveling?
I always say that I get paid to travel; I tell jokes for free. Airports and airlines beat you up. … That’s the tough part. With every job, there’s something you like and something you don’t like. The thing I’ve learned is that you spend money to be as comfortable as possible. I’m not saying I take private jets or fly first class every day, but when you’re flying every week, you’re not looking at basic economy. To the people who are reading this, you know that you’re not allowed to bring water onto the plane, so stop holding the line—and maybe don’t wear those knee-high lace-up boots.

What did you do before establishing yourself as a standup comedian?
I was an airplane mechanic. If this comedy thing doesn’t come out, I still have my toolbox. I did that for 10 years, and when I was training new mechanics, I found that I had more fun making them laugh than I did training them. So I decided I wanted to try comedy. McDonnell Douglas cooperated with my dream by laying me off. I started by doing open mikes in places where standup comedy never should be done: the backs of bookstores, rec rooms, trailer parks, bowling alleys. … I was working as a doorman at the Laugh Factory [in L.A.], and it was my education in comedy; my professors were some of the greatest comics there are. I was seeing Dom Irrera, Damon Wayans, George Lopez, and then you would have the legends come in; Rodney Dangerfield would come in in his bathrobe. I learned by watching them.
You’re sort of famous for being a gearhead, particularly motorcycles. How did you get into bikes?
When I was a kid, I fell in love with the feeling you get when you’re moving. It’s my meditation. I feel free, and I love the power. Jay Leno is a friend of mine, and he’s a big bike guy—I’ve been on Jay Leno’s Garage, which is a lot of fun. The great thing about motorcycle people is that you never have to explain why you have more than one. I have a BMW, which is German; an Indian motorcycle, which is made in the U.S.; a Triumph, from Britain; and a Honda, which is Japanese. I’m representing all countries. I used to have a Ducati, too.
How fast did you go on the Ducati?
We’re not going to admit anything. The stunters—the young guys doing wheelies— they keep making the mistake of doing what they’re doing and posting the videos on YouTube, and the police just track them down by their license plates. So as far as you’re concerned, I’ve never done more than 65 miles per hour. The speed limits of this country, I would never violate.
You’ve got some interesting tattoos. What do you have and why?
My tattoos are related to comedy—the light and dark side of comedy. I love the jester; he’s the only one who could make fun of the king. He spoke truth to power. At the same time, if he was not funny, they would chop off his head. I also like the sad clown, the idea of how comedy and drama work together in the sense of laugh now, cry later.
You’ll be hosting Family Feud Live around the country in May and June, including at Harrah’s in Atlantic City on June 1. What else do you have in the works in the months ahead?
I don’t know what to expect [with Family Feud Live], but I know it’s going to be fun. Beyond that, I’ll keep doing a lot of club dates, and I’ll probably be at Just for Laughs [comedy festival] in Montreal, where I was discovered 20 years ago. I love Canada. If global warming works out, maybe I’ll consider moving there.