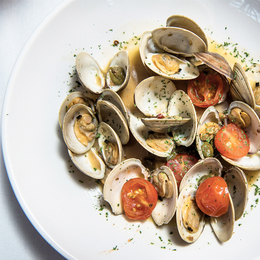 Palate: Where We Lay Over Scene
Haddonfieldâs Kings Highway has long been a staple of the South Jersey date night scene.

The relatively calm street is perfect for strolling, window shopping and of course dining. So our hearts always beat a bit faster when word gets out that a new restaurant has settled in.

Verona Ristorante has taken over the space once occupied by The Little Tuna, which relocated to Lindenwold in April 2018 after 17 years on the bustling strip. It goes without saying that the new restaurant had big shoes to fill when it opened up in November 2018.

Owner Endrit Bodi decided to open the doors in Haddonfield after years of managing his family’s Avalon restaurant, La Fontana. Bodi aimed to create a romantic and eclectic dining room, channeling the classic Shakespearean love story Romeo and Juliet in fair Verona—hence the name. The walls are a warm golden yellow, with floral accents and depictions of Italy adding to the ambiance. The second floor hosts a private dining room for events and special occasions.

In the kitchen chef Artur Haxhiu—who has years of experience cooking in Italy, Greece and beyond—has crafted a focused menu heavy on pastas, seafood and assorted customary favorites like chicken parmesan and saltimbocca.

The evening got off to a rousing start with an order of the peach burrata. A halved roasted peach was plated alongside the creamy, soft cheese and finished with crispy strips of prosciutto di Parma, paper-thin snow peas and a drizzle of white honey and balsamic. The dish was creative, balancing fresh produce with creamy and crispy elements for textural balance and I imagine it would be close to perfect when peaches are in season and really bursting with flavor.

Another delectable starter came by way of the vongole tarantina, which featured small clams sautéed with fresh cherry tomatoes, shallots and capers, swimming in a light and garlicky white wine broth (you can also opt for red sauce). The capers added a nice burst of salt and briny flavor that complemented the clams, adding a touch more flavor that was slightly absent from the broth itself.

With no shortage of pasta entrées to choose from, including homemade gnocchi and ravioli, my eyes were immediately drawn to the bucatini buscanieri. The nicely executed al dente pasta was tossed in a creamy white wine and garlic sauce that was wonderfully absorbed by the thick spaghetti-like noodles, helping to bring all of the flavors to the forefront with every bite. It was finished with an array of calamari rings, shrimp and a whole langoustine served in its shell. The langoustine itself was nicely prepared, but the rest of the fish could have used the same care as both the shrimp and calamari were not nearly as satisfying.

Risotto was also well represented on the menu and stinco d’agnello arrosto was definitely a winner. A massive lamb shank was slow cooked in a red wine reduction and arrived practically falling off the bone. The accompanying risotto Milanese, meanwhile, was expertly cooked, with just the right tender bite and fantastically creamy sauce.

The desserts—all homemade—were highlighted by an extensive selection of ice creams and gelatos that change based on produce and seasonal availability. I couldn’t resist the chance to sink my teeth into the torta calabrese cake, which was billed as an Italian version of tres leches. The chocolate cake was soaked in ice cream and finished with fresh whipped cream and a raspberry sauce. The cake was a bit oversaturated, but the elements had that homemade touch that set it apart.

When I think of Verona Ristorante, I instantly think of comfort. The menu has a familiarity that many local residents will appreciate and the space is designed with intimacy in mind. Whether it’s another romantic night on the town with your special someone or a private dinner to catch up with old friends, love is really in the air and in the food.