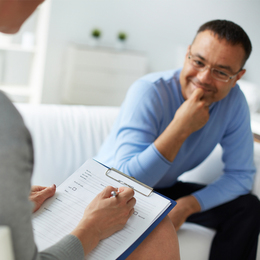 Help Wanted
New Jersey is working to combat mental health illness, but a shortage of specialists and proper funding is creating a new set of issues.

This past summer, news of two high-profile celebrity suicides within days of each other came as a shock to many from the outside looking in. To admirers, both chef Anthony Bourdain and fashion designer Kate Spade were thought to be living happy, fulfilled lives, but these individuals were in fact part of a growing population who struggle to find another way to fight their mental illness.

According to the National Institute of Mental Health, suicide is the 10th-leading cause of death in the United States. The Centers for Disease Control and Prevention show suicide rates have increased by 25 percent over nearly two decades ending in 2016. Depression and anxiety disorder are the most common types of mental illness, along with post-traumatic stress disorder and bipolar disorder.

“It’s sad it takes a crisis that gets people to talk about suicide, whether it happens to a celebrity or on the [television] show 13 Reasons Why,” Moses says, noting that the Netflix show that centers around teen suicide had an impact on students who opened up to school counselors and called hotlines as a result of its message.

“In some instances, individuals may feel more empowered to speak out about their own emotional or mental health struggles,” DiFabio says. “In other instances, they may relate to that celebrity’s feelings of despair and depression and feel fearful of their own suicidal thoughts or impulses. High-profile suicides, while extraordinarily tragic, often have a way of mobilizing and galvanizing the community; shining a light on mental health issues that may have been kept in the dark.”

Bourdain and Spade’s deaths also show that mental illness does not discriminate. “I think suicides and mental illness often ‘surprise’ us when they are revealed because unlike medical or physical illnesses, mental disorders are invisible, so others often have no idea that the person is struggling,” says Dr. Xiaolu Jiang, psychiatrist and owner of South Jersey Mental Health. “Especially given the stigma and shame, individuals try to hide their symptoms.”

Some hide their symptoms from family and friends because it’s seen as a weakness within certain cultures, adds Dr. Rachel Shmuts, assistant clinical professor at Rowan University School of Osteopathic Medicine.

“Weakness is frowned upon, whether it’s physical or emotional, and it ends up being guilt—that person feels shame and they don’t seek treatment,” she says. “There are a lot of people who suffer in silence and never get help because of either the stigma with family or community, or the stigma with greater society.”

DiFabio says it’s just as important for professionals to continue to reduce the stigma. “As providers and health professionals, it’s up to us to continue to normalize these discussions and to help reduce both the stigma and barriers related to mental health treatment,” he says. “Some ways we can do this is by screening for depression, identifying and responding to risk factors and teaching families how to have productive and honest conversations regarding mental health. The shift won’t happen overnight, but we’re making progress.”

Conversations are also taking place at colleges and schools that are promoting mental health and self care, such as Rowan University with the help of Inspira Health Network, after seeing the need for these services escalate.

“Inspira partnered with Rowan University about four to five years ago when Rowan recognized that they had an overflow of students needing counseling, and at times, acuity was greater than a college student wellness center could accommodate,” says Sarah Seabrook-de Jong, director of psychiatry services for Inspira Health Network.

But there is a shortage of mental health specialists all across the state of New Jersey. Combined with the increasing need for treatment among all ages, a major problem looms.

And there’s not just a need for psychiatrists. Moses notes there’s a shortage of other types of mental health professionals such as addiction-related specialists, licensing counselors and social workers for a few reasons. One of them is funding.

“The big reason for [the shortage] is because, especially in the public behavioral health system, which our trade association is the provider of, the funding available does not allow for paying competitive salaries, making it difficult to recruit staff,” she explains.

Other contributing factors are issues with finding those with the right credentials and experience, which makes recruiting even more challenging. For example, medical residents who receive training in New Jersey but pursue their careers elsewhere, as well as not having replacements for older doctors who are toward the end of their career.

“National and state data show that a significant number of New Jersey physicians are reaching retirement age, but there’s not a sufficient number of young doctors in the state rising up through the system to replace them,” says Mary Ditri, Ph.D., New Jersey Hospital Association’s (NJHA) director of professional practice.

Ditri says NJHA is working on policy solutions at both the state and federal levels, and New Jersey is also using technology to reach more patients and alleviate this issue.

“Some of the positive things the state has done are expand access to behavioral health care, such as using telemedicine or telepsychiatry [videoconferencing] to connect with patients. This helps compensate for the psychiatrist shortage by helping a psychiatrist talk with a client and consult with a social worker or counselor about a person’s mental health; giving recommendations, helping provide resources and [being] directly involved in treatment,” Moses says. “[New Jersey] is going in the right direction, but a lot more is needed.”