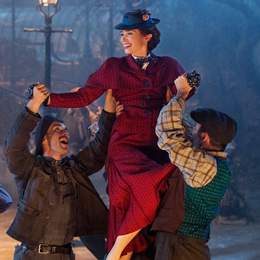 Hollywood loves December. After all, not only is it not all that cold in Los Angeles, but it’s the time of year when even folks who don’t go to the movies go to the movies.

It’s also the time when the Oscar race begins to take shape. And when the studios release their most promising projects, designed to demand attention, impress the viewers and insinuate their way into the upcoming races for those cherished Academy Awards.

Suddenly, multiplex marquees are awash in movies with “must-see” credentials. Suddenly, there are lines at the theaters. Suddenly, most of us know what’s playing. Suddenly, the week between Christmas and New Year’s is as much about moviegoing as it is anything else.

So here is 2018’s lineup (with dates subject to change, of course) of December’s biggest and—if we’re lucky—best movies, collectively rewarding our loyalty to, enthusiasm for and impeccable taste in holiday-season movies.

WELCOME TO MARWEN (December 21)
Genre and Plotline: A biographical dramedy that mixes live action with performance-capture animation and is about the victim of a brutal hate-crime attack who finds a therapeutic outlet to help him through the recovery process despite severe memory loss.
Major Players: Steve Carell, Leslie Mann, Eiza Gonzalez, Diane Kruger, Janelle Monáe
Behind the Camera: Accomplished director and co-writer Robert Zemeckis won the directing Oscar for Forrest Gump, was nominated for Back to the Future for his screenplay and has a directorial résumé that also boasts Who Framed Roger Rabbit, Death Becomes Her, Cast Away, Contact, Flight, The Polar Express and The Walk.
Oscar Prospects: Zemeckis’ truly impressive track record, in addition to Carell’s nomination for Foxcatcher, puts this one in the current Oscar game.
Commercial Prospects: The mix of live action and performance-capture animation could ignite audiences, or could just be perceived as an esoteric arthouse flourish. The jury’s out.
Reason to See It: As acknowledged as Zemeckis has been, he’s still underappreciated as a major moviemaker and—look at those credits again—he’s nearly always worth taking a chance on.
VICE (December 25)
Genre and Plotline: A biodrama about former veep Dick Cheney and his effect on the nation.
Major Players: Christian Bale, Amy Adams, Steve Carell, Bill Pullman, Sam Rockwell, Alison Pill, Lily Rabe, Tyler Perry, Eddie Marsan
Behind the Camera: Writer-director Adam McKay usually works in comedy, often teaming with Will Ferrell, with a résumé that includes Anchorman: The Legend of Ron Burgundy, Talladega Nights: The Ballad of Ricky Bobby, Step Brothers, The Other Guys and The Big Short.
Oscar Prospects: There are lots of Oscar accomplishments among the ensemble cast: Bale won for The Fighter; Rockwell won for Three Billboards Outside Ebbing, Missouri; Adams has five nominations and Carell one. So a nominee or two could easily surface.
Commercial Prospects: We’re not talking blockbuster territory here, but with all the political interest that ordinary folks are displaying these days, the casting alone should beckon an interested audience.
Reason to See It: Hey, who wouldn’t want to see Bale play Cheney? Or Rockwell play George W. Bush? Or Carell as Donald Rumsfeld? Or Tyler Perry portray Colin Powell? And political junkies can’t be the only citizens who will be intrigued.
ON THE BASIS OF SEX (December 25)
Genre and Plotline: A biographical drama about Supreme Court Justice Ruth Bader Ginsburg—who was also the subject of the recent documentary, RBG—which focuses on her struggle for equal rights.
Major Players: Felicity Jones, Armie Hammer, Justin Theroux, Jack Reynor, Kathy Bates, Stephen Root, Sam Waterston
Behind the Camera: Mimi Leder, the director, works mostly in television, but has also brought The Peacemaker, Deep Impact, Pay It Forward and Thick as Thieves to the movie screen.
Oscar Prospects: Jones’ Best Actress Oscar nomination for The Theory of Everything automatically puts this one in the running.
Commercial Prospects: Unlikely to become a runaway hit, but current interest in politics and a big year at the movies for Justice Ginsburg ought to give this one a boost.
Reason to See It: Jones is an accomplished actress and Ginsburg continues to fascinate.
DESTROYER (December 25)
Genre and Plotline: A crime drama about a police detective who reunites with colleagues from an undercover assignment from her past in a desperate attempt to make peace.
Major Players: Nicole Kidman, Toby Kebbell, Tatiana Maslany, Sebastian Stan, Scoot McNairy, Bradley Whitford
Behind the Camera: Karyn Kusama has also directed Girlfight, Aeon Flux, Jennifer’s Body and The Invitation.
Oscar Prospects: It won’t go unnoticed if for no other reason because Kidman brings an Oscar for The Hours and an impressive four Oscar nominations to the table.
Commercial Prospects: An interesting premise for a movie that might struggle finding an audience at holiday time.
Reason to See It: The prolific Kidman is always watchable, even when her films themselves fall short of the mark.