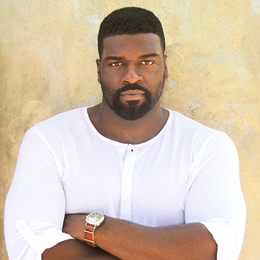 Things are going so well for Stephen Hill at the moment that nothing can seem to wipe the permanent smile off his face.

Not even a chipped tooth and an emergency visit to the dentist on his day off.

The South Jersey native, a 1995 graduate of Willingboro High School, recently scored the biggest break of his 15-year acting career when he was cast as one of the leads on CBS’ Magnum P.I. reboot. He stars as Theodore “TC” Calvin, a former Marine chopper pilot and best friend to private investigator Thomas Magnum, played by Jay Hernandez in the role made famous by Tom Selleck.

Not only is this the most high-profile gig Hill has ever booked, but the show just so happens to be set in Hawaii, where it shoots and he now lives. Which brings us back to the dentist.

Despite growing up near the Jersey Shore, Hill had never gone surfing in his life until a few months ago. Since his character on Magnum is a surfer, he has taken up the sport, and on a recent Saturday he suffered a minor injury after wiping out. Still, the little mishap did not take away from Hill’s love for surfing or his appreciation for his career, which he calls a “true blessing.”

“It’s a Saturday, I’m free and I’m going back to my amazing view and apartment,” Hill says on his way home from the dentist. “I’m going to meditate—I try to give thanks through prayer or meditation every day, because I’m so thankful for everything.”

Since graduating from Hampton University, Hill has appeared on television shows such as Boardwalk Empire, Blue Bloods and Luke Cage. He also had a role on the Netflix series Maniac, starringEmma Stone and Jonah Hill.

On the big screen, he can be found in Widows, a Viola Davis film directed by Academy Award-winner Steve McQueen, which opens this month.

We recently caught up with Hill to discuss how he got into the industry, his chemistry with the Magnum cast and the many jobs he had in South Jersey that have established his work ethic as an actor.

His inspiration to become an actor…
I started selling copiers at Xerox [after college]. Then my mom had pancreatic cancer and she passed away in ’03, and that’s when I started giving acting all of my focus. I always felt like my mom had talents that were untapped. She probably could have been an interior decorator. I looked at a picture of my mom not too long ago; it was from when she was in high school. At that time she was coming from North Carolina and there was even more racial tension than now in this country. I just wondered if she had the opportunities that I had in life, what would she have done? I wondered what she would have done if she had gone to college or had access to better jobs. I get to stand on her shoulders and people like her, and I just didn’t want to do something I didn’t love or didn’t enjoy doing. I didn’t really enjoy selling copiers, so when she passed away I said, ‘Why not do something better?’

Remembering the original Magnum…
I was pretty young when it first aired, because I think the first airing was ’81. So I was only about 5 or 6. But they were on for seven seasons, so as I got a little older I would see it more and more. And flashy cars catch your attention. This was before I cared about the girls in the show; I would see a car and think, ‘That’s cool.’ Between that and Knight Rider, those were two of the shows I loved to watch, if not for anything else than for the cars. I still watch the old show now because I feel like it’s good mojo. I have the first season and I play it in my trailer. If we get a second season, I plan on playing their second season in my trailer.

Creating their own show…
I spoke to Roger E. Mosley over the phone a couple times and I told him that when I get the opportunity, I will pay homage to him in subtle ways. But he told me, ‘Don’t worry about that. You guys are doing your own thing, so do your own thing.’ … I thought that was pretty cool, because I only know how to be myself. Even when you’re playing a different character you’re discovering different parts of your actual self. Acting is learning more about yourself and it’s not really becoming someone else.

Living in Hawaii…
It’s a really cool place; it’s magical. When I say it’s magical, I mean that I see a rainbow at least once a day. I’ve seen more rainbows here in four months than I’ve seen in my entire life. … It’s very interesting how, on this particular island at least, there are always different climates. A buddy of mine lives on a very rainy side of the island. … On the side of the island I’m on, where Waikiki is, it barely rains at all. So we’re getting all of these different looks and that’s why [studios are] coming here to shoot all these different films. On one side you have something that looks like Jurassic Park, and then you have something that looks like a desert, all in one small island that takes just an hour and a half to cross.

A love for surfing…
I had never been on a surfboard. I grew up half in Jersey and half in New York, because my father was always in New York. So I would go back and forth every weekend and spend summers in New York. So being from Jersey but not the Jersey Shore, and living in New York in the summer, surfing was a very foreign thing to me. It just seemed like something people did on TV. But coming out here, it’s reallypart of the culture. … So many people do it and it’s fun. It’s nice to detach; you don’t bring your phone, it’s just you and nature and you’re trying to read nature. … It’s cool and I’m going to keep doing it.

A love for the arts in high school…
I think I was into [performing] but I just didn’t know I was. I didn’t join theater in high school but I was in a little rap group. I loved to dance back then. I was the guy who was in the middle of the circle dancing at a party. I’ve always been into the arts and drawing and stuff like that, and just creative expression. There are a lot of talented people in Willingboro in that regard. That’s what I was into when I was there.

His many jobs in South Jersey…
I worked a million jobs and it taught me to be on time and be reliable. I worked at Great Adventure, but I didn’t just work at Great Adventure. I worked the water rides in the morning and then I would change my uniform and go work for the McDonald’s in the park.

… I also learned there were a lot of jobs I didn’t want. I worked at Shop N Bag— although they don’t call it that anymore—and I picked up trash in Willingboro. In fourth grade I delivered the Burlington County Times in the afternoon, and I took over a friend of mine’s morning paper route for the Trenton Times, so I had a morning route and an afternoon route at one time. I’ve always been a hustler in that way. But it teaches you that you don’t want to work like that for the rest of your life, so I knew I needed to find something that I actually enjoy. All of those jobs I would work to get a paycheck, but I didn’t actually enjoy them. The only other job I enjoyed was landscaping; I always loved landscaping and I did that several times in Willingboro.

Ties to his hometown…
My sisters are still there. I have a cousin there as well and my cousin is probably my biggest fan. My sisters are pretty big fans of mine, but my cousin remembers every little thing that I’ve been in. I don’t know how he does it. I have a stepfather there too. It’s hard now being in Hawaii, but I tried to make it home at least once a month when I was living in New York.

Working with heavy hitters…
I haven’t met Viola Davis in person, but she’s a friend of mine on Facebook and she’ll actually engage. If we’re having a discussion about something, she’ll jump in and start talking. People are like, ‘Wait a minute, is that Viola Davis talking to us right now?’ … Jeffrey Wright is one of my top three favorite actors of all-time, so to have the opportunity to work with him for two weeks [on Boardwalk Empire] was amazing. He’s a really nice guy. Working with some of these directors has also been crazy, like Steve McQueen [on Widows] and Cary Fukunaga on Maniac. I worked with Emma Stone on Maniac too and she was really nice. … I’ve really been blessed to be around amazing actors. On Magnum, Jay is great, Zach Knighton is great and so is Perdita Weeks, who plays Higgins.

Comparisons to the original Magnum…
The old show didn’t have Twitter, they didn’t have Instagram, they didn’t even have the internet. Back then people couldn’t bash something so quickly, or give it praise so quickly. They had to sit with it and digest it. … So I would just say that I hope the audience gives [our show] the time that it deserves. There are a lot of people putting in hard work, and I’m not just talking about the actors. I’m talking about all the people behind the scenes in Hawaii who are making a living for their families.