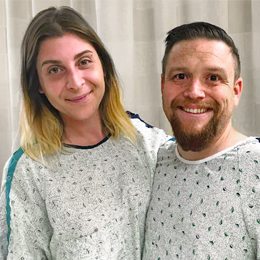 A Lifetime Connection
When Bellmawrâs Bill English desperately needed a kidney donor, he got help out of nowhere from a selfless stranger and both of their lives have been forever changed.

On a gorgeous sunny afternoon in late August, with temperatures in the low 80s and not a cloud in the sky, Bill English enthusiastically talks about what a perfect day it is to bring his two young sons to the local park.

Most people would probably take such an opportunity for granted, but the 35-year-old Bellmawr resident knows better. Throughout his bout with kidney disease—including the last two and a half years, which were especially grueling—he lost his job at a car dealership, endured emergency dialysis three times a week for four hours at a time and saw the pressure his wife Laura was under in caring for two children largely on her own.

But perhaps the part that disappointed him the most was not being able to share normal father-son time with Julian, 4, and Miles, 2.

“Dialysis is definitely painful,” English says, “but the worst part is the after effects. I would have migraine headaches after almost every treatment. I’d be exhausted and couldn’t get off the couch, which put quite a strain on the family. I couldn’t play with my kids. Every time I wanted to do something, I just didn’t have the energy to get up and go.”

That all changed earlier this summer when English underwent kidney transplant surgery at Jefferson Hospital in Philadelphia. Almost overnight he felt healthier; his complexion improved greatly; and soon his level of creatinine, a waste product filtered through the kidneys, was close to normal. Best of all, he is done with dialysis for now.

Surprisingly, it was not a family member, a close friend or even an acquaintance who came to English’s rescue. It was a complete stranger from Pittsburgh who ended up changing his family’s lives forever.

The power of social media
English was first diagnosed with kidney disease in 2013. His condition was stable for two years but began to deteriorate in fall 2015, when Laura was eight months pregnant with their second child. Blood work confirmed he was in kidney failure and he started dialysis treatments before eventually landing on a donor list.

With no family members willing or able to donate, the couple thought about Laura giving up her kidney but ruled it out due to the young ages of their children. So Bill mentally prepared himself to wait five to seven years—the average time for a cadaver kidney—but his wife had other plans.

“If I wasn’t going to be the one to donate I needed to do something to find a donor,” says Laura, who created accounts on Facebook, Instagram and Twitter to create awareness to their plight. “He was not real comfortable doing it and he wasn’t comfortable with me putting signs on our car. But he just had to deal with it because I wasn’t taking no for an answer.”

Amy Pauvlinch, now 28, was the unlikely answer to their prayers. She came across a photo of another father seeking a kidney donor and happened to see Laura’s comment under the picture. That led her to Laura’s Facebook page—titled “Be Our Daddy’s Hero”—and she immediately felt drawn to the family.

“It was incredibly random. I saw it on Facebook and I felt compelled to reach out to them,” says Pauvlinch, who grew up just outside Pittsburgh and currently works as a server at Olive Garden.

“Through the process I’ve learned to trust and have faith in God and I think that was the start of it. I don’t think I chose to do it; I think God chose me to do it.”

A game-changing surgery
Pauvlinch followed through with her interest and committed to donating her kidney after finding out she was a match for English. She got to know the family well over the ensuing months and surgery was finally scheduled for July 3.

English immediately felt better the next day, and his spirits soared the first time he was able to see Pauvlinch. “That was definitely an emotional moment,” he says. “With Laura’s help I got into a chair, and Amy came in and I was just so happy to see her. I don’t even know how to describe it. It was just a very happy and surreal moment.”

English continues to feel great two months later, despite being on 13 to 14 different medications that he will probably have to take for the rest of his life. Pauvlinch, meanwhile, will have to watch her alcohol intake, limit certain foods and cut back on her beloved iced tea, but otherwise feels completely fine.

“I think there’s a stigma to losing an organ; like it’s scary and the rest of your life is going to change,” she says. “I’m almost two months out of surgery and I’ve felt the best I’ve ever felt in my life. I can still have children, I can still exercise—I can still do every single thing a normal person can. I’m just helping somebody else be able to do that too.”

A lasting bond
The way English sees it, his journey not only ended with a new kidney, but a lifelong relationship. He recently hosted Pauvlinch for a barbecue because all of his relatives and close friends wanted to meet and thank her.

“She has a whole new family now,” he says. “I feel like she’s a sister to me. We communicate, if not every day, then every other day. … It’s like we’ve known her forever.”

Laura calls her “another aunt to our children,” and Pauvlinch feels the same way.

“I don’t think I’ll ever experience the bond I have with their family ever again with another human on this planet,” she says. “It’s just a whole new feeling for me and it’s completely indescribable. Take every happy moment from your life and ball it up, and that’s how much I love the English family.”

Now the mission for English and his wife, along with Pauvlinch, is to spread the message of organ donation as widely as possible.

“There’s over 100,000 people on the wait list right now,” English says. “We’re hoping our story will inspire more people who are thinking about becoming organ donors. And for people who are on dialysis and waiting for donation, we hope they see how proactive my wife and I were so people will donate to them.”