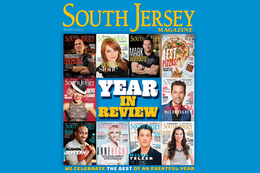 As 2018 arrives and anticipation grows for another great year, we wanted to take a moment and revisit all the things that made 2017 so special. From the numerous stars like Matthew McConaughey, Emma Stone, Brooke Shields and Mark Wahlberg who graced our cover to the stories that tackled local issues and made a real impact, the past 12 months have been nothing short of exciting. In our annual journey back into time, we once again present all the top lists that filled our pages—from the best attorneys and doctors to where to find South Jersey’s finest sandwiches, we covered a lot of ground in 2017.

Memorable quotes from our best interviews in 2017.

“There’s a lot of peoplewho are great entertainers, great teachers, but the term chef is thrown around so loosely these days. When they say they are a chef, I say a chef of what? A TV studio? It’s flattering, it’s great, but I never think of myself that way. I think of myself as a cook.”
—Michael Symon

“It’s interesting, because I was on a series called The Texas Wheelers with Jack Elam and Gary Busey … I was really keeping my fingers crossed that it would be a hit show. Well, obviously it was not: We got canceled after our first season. That was 1974. Had it been a hit, I would not have been able to play Luke [Skywalker].”
—Mark Hamil

“Almost every actor I know has terrible audition stories, and my worst memory was when I wasn’t allowed to have my lines before the actual audition took place. I was 16 at the time, and I was having trouble getting the lines right and this [casting director] started screaming at me and telling me how unprofessional I was. It was insane.”
—Emma Stone

“I think [John Oates] and I are both individually blessed with this will to survive and work within situations. We get along, we are brothers, [and] we don’t get in each other’s way. And we have our individual worlds we exist in. We have a diversity in our music, we like a lot of things and we can do a lot of things in music that has this timeless quality to it.”
—Daryl Hall

“Being a good husband, a good father, a good son, friend, uncle and neighbor, those are the important things that I focus on. I know that if I succeed in business, but I fail at being a parent or husband, then I’ve done it all for nothing. So, I just try to do the best that I can in everything that I do.”
—Mark Wahlberg

“When I was anchoring [the news], there were four or five stations everyone was watching. Just those. Now there are 1,000 channels. I found that while I was on TV I could tell people what was wrong, things to watch out for, but I could never solve the problem, and very often politicians would listen but they did nothing. Once I left TV people convinced me I could solve those problems by running for office, and they were right.”
—Diane Allen

“Coming off [The Late Show], I mean how are you going to top that experience? Initially, I said my work is done, that was great, let me slow down. That’s when I got depressed. As soon as I started to work on the record it was clear to me that I needed to keep playing the piano. It was laid out in front of me, you don’t want to slow down, it’s not in your nature.”
—Paul Shaffer

“It’s the biggest story in the world, which is both exhilarating and challenging. This president has shown a pattern of unexpected interactions with the press, which means you always have to be on your toes, prepared with questions and ready for an exchange with the most powerful person in the country.”
—Hallie Jackson

“For me it was about working so hard; I never slacked off. I was really blessed to know what I loved doing from a very young age and being able to do it. It’s one of the greatest gifts I’ve ever been given.”
—Lea Michele

“I like to prepare ribeye steaks on the grill in the garden and be able to sit down and enjoy a bottle of Amarone (an Italian red wine) while our kids are playing in the garden. That’s home for me.”
—Matthew McConaughey

“It means a lot to me because I was one of those kids growing up. There’s a lot more going on in the world, so I try to encourage them to study hard. It’s not all about sports. Everyone isn’t gonna be a professional athlete. It’s all about the education and giving them a life lesson, letting them know the values in life and making sure the same amount of time they put into sports they should put in 100 times more into school because sports is only a short period of time. I try to preach to kids the value of education, respecting your parents and teachers.”
—Alshon Jeffery

“[Ocean City is] where I first became an actress. I literally started singing for my supper, right on the Boardwalk. I would flip burgers and sing show tunes to get people to come to our stand.”
—Anne Heche

“I remember not having money for a comforter and sheets and the JCC gave me a check for $300 so I could go and buy stuff for my dorm room.”
—Siggy Flicker

“Well, I went from Pennsylvania to Georgia, to Delaware to New Jersey. Cape May, it’s just such a wonderful place to grow up. I grew up in Tranquility, which is just before the bridge, so [me and my buddies] would ride our bikes over the bridge with our boogie boards and ride each other on handlebars and going down the beaches, going to the boardwalk, arcades and everything. It’s just such an incredible town, it’s just Victorian, bed and breakfast, quaint, really classy place and the people who live there are wonderful. My dad was driving to work like an hour-and-a-half to two hours each way just so we could live there. It was a really wonderful time that I absolutely loved growing up there and riding our Beach Cruisers around and having fun.”
—Miles Teller

“I remember other actorswanting to treat me like an adult, and I sort of wanted to commune with them as a kid. So, the other actors who I stayed the closest with were those who would draw cartoons with me and sing songs with me.”
—Brooke Shields