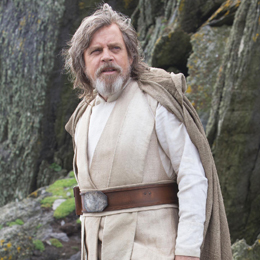 Not many Hollywood actors get the opportunity to play the most virtuous of heroes and the most despicable of villains, but for Mark Hamill, it’s all part of the job. From his iconic portrayal of Star Wars’ Luke Skywalker to his long-running voice work for Batman’s archnemesis, the Joker, in animation and video games, plus many other roles, Hamill has made a lasting impact on pop culture— and he even found time to raise a family with his wife of four decades along the way.

We broke out an old Jedi mind trick or two to convince Hamill to speak with us for this exclusive interview. You won’t find any spoilers for Star Wars: The Last Jedi here, but as the man himself might say: May the Force be with you.

SOUTH JERSEY MAGAZINE: As Luke Skywalker, you portrayed the son of one of pop culture’s worst fathers, but you’re a devoted father and husband in real life. In what ways has your alter ego’s family shaped your relationship with your own family?

MARK HAMILL: You know, art reflects life and vice versa. I think the films are relatable because they are about family. And they’re optimistic films. I think they appeal to the better angels of our souls. The fact that Luke could stand up to his father and turn down the opportunity to be the second most powerful man in the galaxy—that’s something.

But to try and answer your exact question, that’s hard to know, because obviously, I’m a person playing a character. … I guess that’s the best way I can answer it: I never mistake myself for being as courageous and admirable as Luke, but it sure is fun playing him.

SJM: You and your wife, Marilou York, are approaching your 40th wedding anniversary, which is no mean feat— especially in Hollywood. What’s the secret of your success?

MH: I always say one word: acceptance. It’s one of those things where over the years you can have trying times and difficulties, and sometimes people are too quick to just say, “OK, we’re going to remedy it by ending the relationship.” I would caution people that if you find somebody that complements you in a way that is positive, to try and work things through.

I don’t really know how to answer that, either, otherwise I’d write a marriage manual. I will say that two words are important: Don’t cheat. That’s a good one. I mean, so many people say to me, “I don’t understand, my wife is filing for divorce.” And you say: “Well buddy, you had an affair with your secretary. Don’t be so bewildered by that.” Listen, I’m not one to come to for marriage advice, believe me. But like I say, if something’s … not broke, don’t fix it.

SJM: How do you think your own turn at parenting turned out?

MH: You know, it’s trial and error. You try and make sure you listen to them. My father was authoritarian. He was a military officer. So, I was determined to try and be less intimidating. People say, “You’re too permissive,” and this and that, but I always felt like if my kids are happy, I was happy. … It wasn’t easy, but I am proud of the fact that they’re all grown now and we still have a wonderful relationship, as opposed to them all growing up and hating my guts.

SJM: You were in your mid-20s when Star Wars debuted, and in your mid- 60s when you returned to the franchise for 2015’s The Force Awakens. How would you have handled that initial fame differently if you were the same man then that you are today?

MH: I was sort of in a bubble. When I did Star Wars, I immediately was working on another film. I was doing Corvette Summer when the full impact of it really hit. … I didn’t really realize the enormity of it until it started showing up in sketches on Saturday Night Live, political cartoons, and it became sort of a pop-culture reference, referring to certain politicians as Darth Vader and all that. It really entered the vernacular awfully quickly.

I think what happened when I came back to it, I could enjoy it in way I never could when I was in my 20s. Because there was some perspective on it. Star Wars was my first movie, so you think, well, they’re all going to be like this. I think I have an appreciation that I never would’ve had before, and it’s kind of fun being around Daisy Ridley and John Boyega and Oscar Isaac and all these young people that are closer in age to what I was when the first film came out, to watch and see how they deal with it all. They are all terrific actors. … But again, I’m enjoying it more now than I did then.

SJM: In addition to live-action films, you’ve had a successful career doing voiceover work since the ‘70s, with your earliest voice role even predating Star Wars. Many fans also believe you’re the Joker’s defining voice thanks to your work on numerous Batman animated and video-game projects. What other iconic characters would you like to voice for animation or games, and why?

MH: [The Joker] would be hard to top. First of all, with the Joker, I thought there’s no way they’re going to let me play this part because it would be such a disaster in the public’s mind. They won’t accept someone who’s played this icon of virtue to play this icon of villainy. So, I was really relaxed, because I said, “They’re not going to be able to give me this part because it’ll be a PR nightmare.” I remember how people jumped to conclusions when Michael Keaton was announced to play Batman. Until he showed how wonderful he was, people said, “Oh, he can’t play that character!” So, I was expecting a backlash like that.

I’ve played so many different characters, I’ve forgotten. These kids write me letters or they tweet me things, and you go, “Oh, I’d forgotten I’d even done that.” I can’t think of a specific role where I’d think, “Oh gee, I’d love to play that character.” I love the challenge. I love doing things that are unexpected. I love playing a goofy villain like Gadfly Garnett on Miles from Tomorrowland—there’s a Disney series. I love playing offbeat characters, and I love the fact that animation gives you a chance to really express yourself in a way that might be intimidating if a camera were pointed at you. The fact that there’s anonymity is very liberating, because you’re able to make choices that you wouldn’t ordinarily make if you could be seen.

SJM: Last question: If you hadn’t been cast as Luke Skywalker, how do you think your life would’ve turned out?

MH: It’s interesting, because I was on a series called The Texas Wheelers with Jack Elam and Gary Busey. I was really keeping my fingers crossed that it would be a hit show. Well, obviously, it was not: We got canceled after our first season. That was 1974. Had it been a hit, I would not have been able to play Luke.

I’m just very grateful that I’ve been able all these years to continue to do things I love in so many things I loved as a kid—I wrote a comic book, I’ve done cartoon characters, video games—all these things you’re meant to give up when you get to a certain age. And I still love it as much as I did when I was younger.

I’m in the escapism business, and I love it. Because people see the world, and there’s so many hardships, there are so many things that are unfair and cruel and brutal, and you need that escapism. … I understand, because I need the escapism myself, and I’m proud to be able to be doing it well past my expiration date.