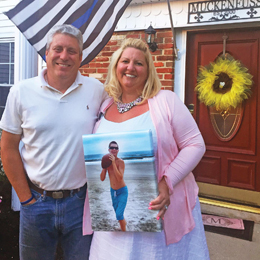 Peeking into Austin Muckenfuss’ bedroom—left just as it was the last day of his life in November 2015—it’s easy to get a sense of his easily likable personality. Austin’s personal sanctuary tells the story of an exuberant kid who loved sports (especially football) and his family—a hand-written note reminding himself to pay back money his dad had fronted him for an Xbox remains on a bulletin board, as does a display honoring one of his older brothers who had served in the military.

There are also dozens of pairs of sneakers collected through the years, along with various team jerseys and trophies on display. And there, on a small table, is something else: a memorial poster with a photo of Austin in his Washington Township High School football uniform signed by dozens of friends and family members. It is a memento from a one-year anniversary candlelight vigil held at the Glassboro intersection where Austin was struck by a car while attempting to cross Delsea Drive in a crosswalk.

The handwritten messages, written by classmates, neighbors, teachers and family members, are heartfelt, and heartbreaking: Missing you everyday; We all miss you, buddy; Till I see you again; Thank you for being my first friend—I’ll always miss you.

“He had such an impact on people,” Austin’s dad, Rich says. “We didn’t even know what an impact until after he had died.” Kim Brody-Muckenfuss, Austin’s mom, agrees, saying her youngest son had “a way of making people feel special. Everyone in our family felt like they were his favorite person.”

Losing their child has been devastating for Kim and Rich—and for their four other sons—but amazingly, they almost immediately began channeling their grief into action, offering scholarships in Austin’s name to high school students aspiring to further their education, and more recently, through monthly support groups for bereaved parents that Kim, a nurse, facilitates (with Rich taking part in each session).

“I feel like it’s something Austin would want me to do,” Kim says of the support groups. “I feel like he’s giving me jobs here on Earth until I see him again.”

Listening to Kim and Rich reflect on Austin, it’s clear he was no ordinary teenager. An “old soul,” as his mom calls him, not a day went by when the teen didn’t tell his parents he loved them. No matter where the family was going, be it a quick run to a store or to hang out with one of his brothers during his car inspection, Austin wanted to come along. Being around the people he loved was his top priority.

“He was very affectionate and never afraid to show people that he loved them,” Rich recalls. “He was always giving to others.”

And with that as his legacy, the couple first launched a scholarship program that provided more than $3,000 to graduating seniors its first year (2016); and over $4,700 this June to six students aspiring to continue their education. “We focus on young people who have had challenges,” Rich says. “Austin had a reading disability and struggled in school because of it. We wanted to design a program that would help graduating seniors who have had to overcome challenges, too.”

Kim notes that it doesn’t matter if the applicants plan to attend a four-year or twoyear college—or instead, attend a trade school: “We want this to be for whoever wants to continue their education in any way, despite challenges they have faced.”

Kim and Rich, who each brought two young sons into their marriage more than 17 years ago, met as co-workers in the late 1990s. Starting out as friends, their romance quickly blossomed and their boys seemed to get along great, too. A “honeymoon baby,” Austin was born in December 2000, becoming the “glue” that brought this blended family even closer together.

“Austin just loved his big brothers and they were crazy about him, too,” Kim recalls, adding that he “seemed to take a piece of each of the four boys; I could see each one of them in Austin.”

Aspiring to a career as a police K9 handler—something that would combine his love of dogs with his desire to serve the community—sports came easy to Austin from an early age; he started playing football at age 5, adding basketball and track as he got older.

The most athletic of the five brothers, Austin was nicknamed “Crazy Legs” for his incredible speed as a running back. On Nov. 4, 2015, Austin played in the annual Washington Township High School Freshman vs. Sophomore football game. It was to be his last time on the field; Austin was struck by a car the following day.

“It was such a good game for him and he was smiling ear to ear,” Kim says. “It was a very special night.” In 2016, the annual game was renamed the Austin Muckenfuss Memorial Game and has since garnered substantial donations for the scholarship fund. In April 2017, an all-ages flag football fundraiser called “Run Amuck” proved another successful scholarship fundraiser.

The bereavement support groups, launched in May, are something Kim says are healing for all the participants— she and Rich included.

Getting to the place where Kim felt strong enough to oversee something as powerful and important as a support group for grieving parents has been a long, hard journey for the eight-year Kennedy Health associate, who works in the Emergency Department at its Cherry Hill hospital.

“When you have a nurse ask a patient what their pain level is, you can’t go beyond a ‘10,’” Kim says. “Losing a child is definitely a 10. No matter what the circumstances, no matter how long ago your child died, or how they died, the pain is awful.”

And while she can see how far she’s come in the grieving process, “It’s still a roller-coaster,” Kim says “The first year, you’re in shock. In some ways, this year has been harder. The reality sinks in.” That has proven true also for Austin’s four brothers, who have struggled with “the fact that they couldn’t protect him … and that this was the last thing anyone could have imagined happening,” as Rich puts it. Even Austin’s two dogs were devastated by his loss; so much so that they now live with one of his brothers as “being in this house without him was just unbearable for them—they wouldn’t eat; all they did was howl,” as Kim recalls.

Having become “immediate empty nesters” with Austin’s passing, the support of friends, co-workers and the Washington Township community has been “unbelievable,” Kim says, noting that more than 2,000 people paid their respects to Austin at the funeral home.

Kim took three months off from her job following Austin’s death and says there have been many turning points in her journey that led to her creating the bereavement support group. One happened when Kim connected with another grieving mom through a Facebook group called Mothers of Angels: “She had lost her son much more recently and would ask me questions like, ‘When did you go back to work?’ and ‘When did you feel like you could drive again?’”

A few months later, the woman’s mother contacted Kim and told her that her grieving daughter had been deeply changed by their conversations: “She told me, ‘She actually seems to have a little hope now’,” Kim says.

“Losing a child isn’t something you ever ‘get over,’” Kim says. “But you can find ways to begin to move forward; to find a sense of hope again. Sharing with others, telling your story, is very helpful.

“I’m hopeful these support groups can be something to look forward to; something to help grieving parents move forward and regain a sense of hope—even if they’re only moving forward in baby steps.”