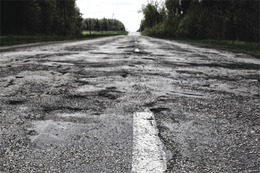 A Rough Road Ahead

Have you ever had to replace a tire after driving across a pothole-ridden road in South Jersey, wondering just how the road came to be so bad, so nearly undriveable? Have you crossed a bridge so badly in need of repairs, you question what exactly is taking so long?
Us, too.

As it turns out, it’s a statewide problem and it’s not going away anytime soon. According to the U.S. Department of Transportation, 66 percent of New Jersey’s roads are in poor or mediocre condition. This means more traffic and more accidents, not to mention costly repairs for motorists whose vehicles suffer damage as a result of the bad roadways.

The bridges in the state aren’t much better. More than a third of New Jersey’s bridges are either structurally obsolete or deficient, according to a 2017 report by the American Road & Transportation Builders Association (ARTBA).

In fact, New Jersey’s bridges are ranked the sixth-worst in the nation, the ARTBA report found—and 2,250 bridges need repairs, which will cost an estimated $7 billion.

When you have a state as heavily populated as New Jersey, you can attribute these deteriorating conditions to numerous factors. Our proximity to major U.S. cities makes us a thoroughfare for many commuters. In addition, our buzzing ports and large warehouse distribution equals lots of trucks chewing up the roadways.

So just what is the state doing to fix its crumbling roads and bridges? Well, raising the gas tax, for one.

The highly controversial tax was approved by Gov. Chris Christie last fall, and raised the price of gas in the Garden State by 23 cents per gallon, generating an estimated $400 million into the nearly empty Transportation Trust Fund (TTF) and used to complete necessary repairs and updates on the state’s roads, bridges and rails. It was the first hike in gas taxes in the state since 1988.

“The tax assists maintaining a stable fund for the transportation program to improve the quality of life for New Jersey residents, maintain and improve the movement of goods and provide increased public safety,” says Jennifer Grenier, assistant vice president and deputy area manager at WSP/Parsons Brinckerhoff, an engineering firm that was not involved with the report or gas tax. “The TTF funding had not seen an increase in decades, so while cost of living and goods has increased, transportation funding had not.”

While hotly debated, the tax hike was championed by some local officials. “Transportation work is one of my top priorities, which is why I worked to secure bipartisan support to renew the state’s Transportation Trust Fund with $2 billion annually for the next eight years and is why I am working now to expedite and increase funding by $400 million for infrastructure improvements this year,” says Senate President Stephen Sweeney.

“The renewed TTF is the largest and most prolonged infrastructure program in state history and includes critically-needed repairs and upgrades for roads and bridges throughout the state. This is an investment in our infrastructure that will produce economic benefits, address transportation needs and contribute to our quality of life,” he explains.

Cathleen Lewis, director of public affairs and government relations at AAA Northeast, puts it simply. “New Jersey has not had the funds to address these issues; delaying repair only makes the problems worse,” she says. “There has been no money to address repair or maintenance.”

But the state of New Jersey’s bridges aren’t quite so dire, New Jersey Department of Transportation officials say.

“First it is important to understand the terminology used in the bridge report. ‘Structurally deficient’ does not mean a bridge is unsafe. It means that either the deck, superstructure or substructure is in need of repair or rehabilitation,” says Steve Schapiro, communications director at the New Jersey Department of Transportation.

“A ‘functionally obsolete’ bridge is one that was built to standards that do not meet the current minimum federal requirements for a new bridge. It does not mean the bridge needs to be repaired. Functionally obsolete bridges include those that have substandard geometric features, such as narrow lanes, narrow shoulders, poor approach alignment or inadequate under-clearance.”

He notes that sometimes “structurally deficient” and “functionally obsolete” are combined into a single category, which misrepresents the condition of the state’s bridges. “They are two different categories entirely, and neither implies that those bridges pose any danger to motorists,” Schapiro says.

The gas tax—and the resulting investment in TTF—will allow the Department of Transportation to continue its efforts to improve state owned and maintained bridges, according to Schapiro. He also stresses that if a bridge were actually unsafe for motorists, swift action would be taken. Such was the case earlier this year when a major crack in a support structure forced the closure of the Delaware River Bridge for more than a month.

“If the inspectors ever come across a structure that we determine to be unsafe, NJDOT will close either a lane or the entire bridge to make emergency repairs and would not hesitate to take the bridge out of service,” he says.

So what about New Jersey’s roads, the majority of which were deemed in poor or mediocre condition?

Schapiro says things are improving there, as well. “NJDOT strives to maintain the roadway infrastructure in a state of good repair, and preserving the state’s pavement investment is a high priority for the department. By using combined state and federal funds, NJDOT has been able to make improvements to the roadway network and reduce New Jersey’s percentage of deficient pavements over the past several years,” he says. “The percentage of good pavement on our system has risen to 67 percent, which is up from a low of 47 percent in 2008. With the increase in funding from the TTF, the department will have more resources to continue improving our roadways.”

And while many initially felt the gas tax would hurt the local economy, others believe it will have the opposite effect.

“Prior to the tax being implemented, many people thought that it would severely impact the state’s economy because commuters would just fill up elsewhere when driving across the state, so they didn’t have to fill up in New Jersey,” says Rich Bradley, spokesperson for AAA South Jersey. “However, even with the tax, gasoline is still cheaper in New Jersey than Philadelphia or New York. The difference is not nearly as significant as it was previously, but it’s less cheap.”

In fact, the new tax will cost the average New Jersey resident just $4 per week.

“[That is] less than the price of a trip to Starbucks. The simple truth is that people will continue to drive, and to do that they will need gas in their car. We may see a bigger impact during the summer months when people drive more than they do in the winter, but it seems like people have simply accepted the additional costs and continued with their lives as they did before the tax was implemented,” says Bradley.

“Transportation infrastructure is the backbone of the state’s economy and plays an important role in spurring economic development that benefits our growth and prosperity as a state. Our roads, bridges and mass transit systems are an economic advantage— they are an asset that we must maintain and invest in every year, because the return on investment is so huge,” he says. “Having more funding for critical transportation projects benefits the economy of South Jersey, and the entire state, by providing good jobs for our construction industry, as well as a modern network to move people and goods throughout the region and the state, which helps spur economic growth.”’