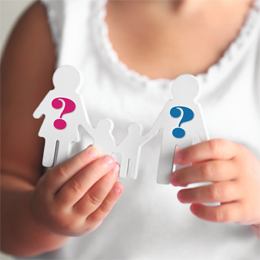 Rachel Kohn ran out to her mail- box. It was Jan. 3, the very first day that mail could be delivered in 2017. It had been almost seven months since she filed paperwork with the state of New Jersey, 20 years since she began the most important search of her life, even longer since the normalities of teenage angst were funneled into a single thought that rattled in the back of her mind: “Did I really fit in here?” The Medford resident—whose name has been changed to protect anonymity—sorted through the mail, hoping to glimpse the envelope with the piece of paper that would finally answer the single greatest mystery in her life: Where did she come from?

Her hopes were dashed that day. And the next. And the next. Finally, on Jan. 12, the envelope was there. She couldn’t breathe. She was afraid to open it. She brought it inside and sat down with her husband and cried. Finally she summoned up the courage.

Inside the envelope was a copy of Kohn’s birth certificate with two names that, until this day, she had never been allowed to see: her birth mother and her birth father. Happiness washed over her as she hugged her husband and cried tears of joy. After all the years of searching, the 51-year-old adoptee shouted out the idea—the hope—she held onto for so long: “I have people.”

First enacted in 2014 and officially commencing at the start of this year, the New Jersey Adoptees Birthright In- formation Act was the final product of a nearly 35-year political battle. New Jersey is one of 28 states that allows adoptees some form of access to their original birth certificates. “Adoptees should have an equal right with other citizens to have access to a factual document,” says Pam Hasegawa, an adoptee herself and one of the leaders of the New Jersey Coalition for Adoption Reform & Education (NJCARE), the leading state advocate for the new law.

So far, more than 2,700 adoptees have submitted applications to receive their original birth certificates, according to the New Jersey Office of Vital Statistics and Registry. These people were adopted after Nov. 19, 1940, when the state of New Jersey began sealing the original birth certificates of adopted children. That policy reflected the prejudices toward adoption at the time and in the decades that followed. Adoption carried a stigma. Closed adoptions—where information about the birth mother or parents is withheld and the birth parents do not know who adopts the child—were far more common back then. Today, 90 percent of adoptions are open. “When adoptions are closed, there’s a sense of secrecy, mystery and even taboo around it,” says Christopher Peszka, district supervisor for the Cherry Hill office of Adoptions From The Heart, a multi- state adoption agency. “It’s not really emotionally healthy, and I think that’s been a big undercurrent of the shift that’s happened over the years.”

Closed adoptions exacerbate the deepest questions that adoptees wrestle with. Who are my birth parents? Where did I come from? Why was I put up for adoption? Psychological literature states that between 60 to 90 percent of adoptees want to obtain identifying information about their birth parents. (Studies have also shown that a large percentage of birth mothers want to be found by the children they put up for adoption, and some birth mothers do in fact seek out their children later in life.) “People have a very difficult time understanding that desire of ‘I need to know,’” says Maria Caliva Picknally, an adoptee from Deptford who later this spring is starting a South Jersey support group for adoptees, birth parents and adoptive parents.

Adoptees will be spurred to search for a number of reasons, ranging from the practical (lack of family medical history) to the unforeseen (what if your potential spouse is actually a close relative?). Identity is often crucial. “A lot of [adoptees] will say to me, ‘I have never met anybody that looked like me,’” says Denise Koetas-Dale, a social worker and adoption coordinator for Golden Cradle Adoption Services, which is based in Cherry Hill. “They’ll say even if their birth mother doesn’t want to meet them, could they get a picture? ‘At least I want to see what she looks like.’ They just need some- body who looks like them and has that biological connection.”

Fortunately for adoptees, finding birth parents (often known as the “search and reunion process”) is far easier than just a couple decades ago, thanks to the internet. DNA testing is also becoming equally transformative; sites like Ancestry.com use giant databases to link adoptees to relatives, connections that can lead them to their birth parents.

Still, there are countless adoptees who don’t know the identity of their birth parents and have spent years and decades fruitlessly searching. For them, the Adoptees Birthright Information Act represents an incredible lifeline.

Robert Moore was adopted on Dec. 31, 1948 when a friend of his adopted parents fetched the newborn baby from a lawyer’s office in Camden. But that’s all he knew; after two decades of searching, the West Deptford resident and retired high school teacher had been unable to glean even one piece of information about his birth parents.

That changed when a copy of his original birth certificate arrived in the mail. Names in hand and with the enlisted help of an expert, he was able to learn that his mother gave birth to Moore at the young age of 19 and then died just a few years later in a boating accident. His father ran a local construction company and passed away last November at the age of 91. Moore has connected with a half brother who lives just three miles away, as well as two cousins who are teachers as well and who knew many of the same people that Moore did growing up. “I’m really pleased with the way everything worked out,” Moore says. “I’m at ease now.”

The new law was a miracle for Moore, but a document with such powerful possibilities for adoptees also has its limitations. Given the attitude toward adoption and unwanted pregnancies at the time, it is no surprise that such misinformation (such as the wrong person or even false names) could pervade. There are other record-keeping problems as well. Under the law, people who are adopted in New Jersey have a right to their original birth certificates, even if they were born in an- other state. However, Amy Snowden has had no such luck. Born in New York and adopted in Essex County, the Blackwood resident was told by the state that it did not have her original birth certificate. Snowden hopes and believes that the Essex County government has it, but she has been stifled in her efforts to obtain it. In her three decades of searching she has acquired bits of information, but the frustration of not knowing has reached another low point. “I guess I’m close,” she says, “but I keep thinking [no one] is going to help me, and I don’t know where to go from here.” If New Jersey doesn’t have her original birth certificate and it remains in New York, Snowden would be out of luck; adoptees’ original birth certificates in that state are sealed.

And there is another potential roadblock for adoptees: a provision in the Adoptees Birthright Information Act that allowed birth parents, up until the end of 2016, to redact their names from the original birth certificate. (Parents who do redact their names still must provide a family medical history.) The possibility can be devastating for an adoptee who is finally on the doorstep, but the thinking was to maintain the anonymity that birth parents were promised when they gave a child up as part of a closed adoption. (Hasewaga and NJCARE claim that guarantee of anonymity never had legal standing.) Yet so far, according to the state of New Jersey, only 558 parents have requested anonymity; many decided not to take the extra step, while others may have simply not found out about the new law.

Adoptees and open birth record advocates feel the added protections are unnecessary. “I do think the media has portrayed adoptees in the past as obsessive stalkers. And many times I’ll get a knee jerk reaction from a birth mother, [saying] ‘Are they angry?’” says Pamela Slaton, an investigative genealogist from Lumberton who specializes in locating birth families and had a TV show on the Oprah Winfrey Network. An adoptee herself whose quest to find her birth parents propelled her into this line of work, Slaton finds that most adoptees are simply grateful for the decision their birth parents made, and that even the birth parents who don’t want to be found can benefit from a reunion. “[Adoptees] carry their birth mother in their heart in a way that makes them want to find that person and say, ‘If you’re tortured by your decision or if it’s something you’ve never been able to get over, know that I’m OK and thank you for what you’ve done for me,’” says Slaton, who works with hundreds of clients a year nationwide and wrote a book titled Reunited: An Investigative Genealogist Unlocks Some of Life’s Greatest Family Mysteries. “It’s primarily wanting to make sure that the woman who gave us life knows that we’re alright. That’s really what drives people.”

Rachel Kohn unfortunately never got that opportunity. After finally discovering her mother’s name, she did a Google search—and found that her mother had died just three months earlier. “Within the span of five minutes, I got and lost my birth mother. And that was crushing beyond words,” Kohn recalls. “But the silver lining is, with an obituary you get a next of kin. And Facebook is awesome.” Kohn has now established warm, exciting relationships with her sisters and other relatives, and is working—with her newfound “big sister”—on locating her birth father. After seeing pictures of her birth mother, she felt a deep sense of joy in finally seeing a face that so closely resembles her own. She learned that she and her birth mother shared common interests, such as doing crosswords at night to unwind and a matching list of favorite comedians.

Kohn says her life never felt incomplete. And yet now—after discovering her parents, finding sisters, being welcomed into a family—she describes a sense of feeling complete. “There can be a lot of pain out there,” she says, “and even without meeting my birth mother, my story is beautiful and happy.”