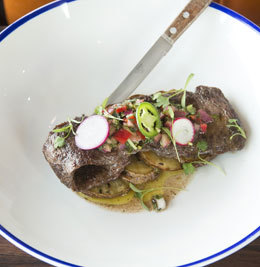 The micro-chain restaurant trendâeateries that have spread out through multiple states or regions without expanding too rapidlyâhas taken off in South Jersey, and itâs easy to see why: Diners can get the quality assurance and performance of an expanded, large-scale operation, but still feel connected to their community. For proof look to places like Jules Thin Crust in Cherry Hill, The Turning Point in Marlton and Cherry Hill and Iron Hill Brewery & Restaurant in Maple Shade and Voorhees; spots that have grown and succeeded in distinct areas without getting as big as nationwide chains.

While not as small as other chains, Plaza Azteca is following the micro-chain movement into our area, opening its only New Jersey location in Sicklervilleâs burgeoning The Shoppes at Cross-Keys shopping center in June. The restaurant focuses on authentic dishes you might not be used to seeing at other Mexican chains, while also serving up classic tacos, burritos and enchiladas with a slight twist.

To start thereâs the margarita list, which takes a nice turn from the super sweet, blended varieties youâre used to with the help of top-shelf liquors and interesting ingredients. The El Valiente, for example, came served over ice with a splash of mescal and citrus juice. The mescal added a smoky quality that perfectly complemented the juice and created a simply balanced, flavorful sip.

Appetizers played up a unique flavor palate as well, starting with choriqueso, a melted cheese dip mixed with crispy chorizo bits and served with house-made tortillas for dipping. The chorizo was salty and added a nice hit of spice to the dish, but didnât overpower the cheese it was swimming in. Another starter of ceviche mixtoâa dish of raw scallops, shrimp and sea bass, diced and mixed with jalapeÃ±os and cherry tomatoes, red onion, cilantro and avocadoâwas overloaded with citrus. It was hard to appreciate the fish, creamy avocado or spice from the pepper amidst the tart, tangy lime juice.

One of the highlights of the appetizer menu was the restaurantâs tableside guacamole service. Servers mixed the guac to the guestsâ pleasure, giving diners the option to limit or load up the avocado with onion, spice and that love-it-or-hate-it herb cilantro, all available on a custom-made cart fit just for the occasion. It was certainly one of the most popular choices of the evening, as the cart made its rounds across the room more times than I could count.

At first glance, the carne asada entrÃ©e seemed relatively straight forwardâsteak, rice and beans. But what arrived went far beyond what I was used to at most Mexican restaurants. Marinated skirt steak arrived beautifully plated on a bed of crispy potato coins, splashed with a house-made chimichurri sauce and served with fresh cilantro, rice, beans and fresh tortillas. The dish stood alone without the tortillas, and did not need the extra accompaniment, but they were so tasty on their own that it was hard not to pull away shreds of the tortilla from time to time. Meanwhile, the star of the plateâthe steakâwas tender and absolutely bursting with flavor, made only better by the fresh, slightly spicy chimichurri. Potatoes seemed like an odd addition at first, but fit in quite nicely to round out what was a really enjoyable entrÃ©e.

A plate of oxtail enchiladas seemed too unusual to pass up, and came loaded with slow-cooked oxtail meat, rolled in corn tortillas and covered with Guajillo pepper sauce, melted cheese and white onions, also served with rice and beans. The oxtail meat in itself was so tender and flavorfulâsitting in naturally smoky, rich sauce created through the slow-cooking processâbut it seemed masked by the cheese and white onions, both of which overwhelmed the taste of the meat and the pepper sauce.

Our team of servers raved over one dessert in particular: the churro. Plaza Aztecaâs variety took the standard dough and stuffed it full of caramel before deep frying them into sharing-sized strips, dousing them in cinnamon sugar and serving it with another side of caramel. If you can believe it, the caramel was extremely overpowering, and the straight-from-a-jar, overly sweet flavor distracted from the fabulous dough that makes churros so wonderful to begin with.

While there were some slight hiccups, I found myself pleasantly surprised, and enthusiastically optimistic about what was coming out of the Plaza Azteca kitchen. Their unique approach to authentic preparation is something Iâm not used to seeing at Mexican chains, and encourages diners to try something new and experience what is really great about the cuisine.