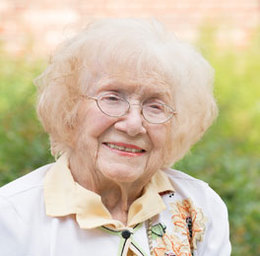 Four local women share their amazing journeys through life and their remarkable stories of the past, present and, yes, the future.

How many of us have wondered what it would be like to live to 100? It’s sort of an unofficial benchmark to say you lived a long, full life. But does it ever really seem possible, even with today’s longer life expectancy rates? While the answer may not be the same for all of us, we recently sat down with four South Jersey centenarians to get a glimpse into their lives and hear some of their remarkable stories of the past, present and, yes, the future.

Collectively, these astonishing women have lived through the Great Depression, World Wars, segregation and much more. While it’s nearly impossible to learn their entire life history in just one interview, their stories alone are enough to inspire.

Through our discussions, we gleaned what we could of their secrets to living a fulfilling life after a century lived, and here’s the kicker: there isn’t a secret. These four women have simply kept living by doing things that define them. Whether it’s getting their nails and hair done, winning at bingo, reading or playing the piano, each has evolved despite their age. There’s no grandiose action to living a long life; it’s just doing the little things that keep you as vibrant as these four ladies.

Raised on the Simei family farm in Williamstown—where Williamstown Middle School now stands—Mary Colangelo (pictured) is just months away from her 105th birthday.

She manages to dress the part of a local celebrity at Kennedy Health Care Center in Sewell—with her hair done every week and her nails lacquered up in red polish. She still has her mink fur coat and often requests to wear it for special occasions.

At this point in her life, Colangelo can’t recall much of her past, but her memory is quickly triggered when asked about her childhood. She was among the youngest of eight children and had a remarkably close relationship with sister Nan, who was a year and 10 days younger and lived to see 100. She was also a resident at the Health Care Center.

The two sisters spent a good portion of their adult life traveling with their respective spouses, and even got married on the same day. For Colangelo, she married her late husband, Nicholas Colangelo, in 1943 in the midst of World War II while he was enlisted in the Army. The two remained married for over 60 years up until Nick’s death in 2005.

While the Colangelos never had any kids of their own, there was no shortage of children in their family, thanks to nieces and nephews who are Colangelo’s frequent visitors to this day. Many could speculate Colangelo’s long life is attributed to her small family of two, but she believes her work ethic—which was born on the farm and raised in her community—was the true reason.

“[I] lived on a farm and did farm work,” she explains, adding she “used a cultivator to cultivate the earth,” and helped tend to the farm’s horses and cows. Later in life, she worked at the Williamstown Post Office and soon became the assistant postmaster—a position she held for 30 years. Not long after, Colangelo took a job at Glassboro State College’s (now Rowan University) library for 10 years.

At 104 going on 105, Colangelo’s memory is still astonishingly intact and she does not hesitate when it comes to sharing her hard-earned advice. “Work,” she says quietly, while her nurse adds that following Colangelo’s healthy lifestyle doesn’t hurt either.

For Philadelphia-born Mary (Mae) Boice, 102, she simply considers herself lucky for becoming a centenarian. As the eldest of six, Boice is the only one of her siblings still alive today.

“It’s unbelievable,” she says with a faint laugh. “I look back at my family and no one has ever lived this long. That’s one of the sad parts; you wish everybody was still here,” adding, “I think I was born lucky because things have always worked for me, easily. I never had to do a lot of studying; I was exceedingly lucky the day I was born.”

Boice was born to a businessman and was quite smart in school. In fact, she skipped the fifth grade on the way to her dream of becoming a secretary. “I never wanted to be a teacher,” Boice explains. “I wanted to get out of high school and go to business school.”

Her career began at 14, when Boice took a job as a bellgirl (a female bellhop) while working at an advertising agency in Philadelphia. It was a far cry from the Mad Men era, but Boice absolutely loved the gig. At 15, she landed a receptionist job at the mayor’s office, who much to her delight—paid her tuition for business school. For the next 12 years, she took every course the school had to offer, and eventually became a personal legal secretary.

During her tenure, Boice married her late husband of 59 years, Charles, when she was 19 years old. “As I said, everything worked out for me,” Boice says, before revealing her fertility struggle.

“[I had] only one son and almost didn’t have one,” she says of her child, Charlie, 75, who lives nearby. “I had [miscarriages]; that was my only sorrow.” Today, Boice has two grandchildren and five great-grandchildren under the age of 18.

She currently resides at CareOne at Evesham Assisted Living in Marlton and is hailed as the community’s top bingo player and a fierce rummikub player. “I didn’t realize bingo was going to be such a big part of my life,” she laughingly admits.

At 102, Boice still recalls the valuable advice she was once told, something she still lives by today. “Be true to yourself,” she advises. “This is my life at this point and I’m very thankful. I do feel very lucky,” she adds with a laugh. “Luck is my favorite word.”

For a woman entering her centenarian milestone, Rose Wilson, just might be wittier and stronger than ever. The 100-year-old Moorestown-native and current resident of CareOne at Evesham Assisted Living has a sharp memory and recalls much of her life dating back to age 3.

“I remember the first World War,” she says confidently. “[When my sister and I] were little girls, we used to play outside and my mother wouldn’t let us because the soldiers camped right across from us. … I remember when the Armistice was signed [in 1918]. … My mother was dabbing her eyes crying, she was so happy the war was over.”

Wilson—who is the fourth of six children and the only one living today—has a lot of history in the South Jersey area, and even met her husband of 35 years, William, in Mount Holly. “He was a wonderful man,” she adoringly says.

The two married in the midst of World War II when Wilson was 28 years old and spent their first few years apart. “We wrote letters,” Wilson says of their overseas separation. “It was back in 1945 and we didn’t have all the communications that you have today.”

In terms of work, Wilson took a clerk job in Philadelphia after she graduated high school, and did a lot of traveling. From visiting countries like Germany and Austria, she relishes those days and admits the freedom is among the hardest things to lose in her old age.

“My traveling days are done,” she says matter-of-factly. “Everybody passed away, all my friends are gone. … I don’t have anybody but my niece and nephew now, they look after me.”

Throughout her 100 years, Wilson believes her active lifestyle (and doing yard work) is the reason why she’s still here. “Stay out of the rocking chair,” she urges. “Keep moving, stay active, eat properly, don’t smoke and drink moderately if you drink.”

That’s not to say Wilson didn’t have her brush with death. She reveals she almost died three times in her lifetime. “I’ve been very sick earlier in my life, now I’m still here,” she reveals. “God wasn’t ready for me, he said, ‘Get down there!’”

Today, Wilson is very much the picture of good health. She still walks about CareOne without a walker, fancies a casual bottle of beer or a glass of wine at night, and keeps active by reading. “I used to read mysteries, but I gave all that up … I’m into the Amish right now, something really quiet,” she laughingly admits.

While Wilson still struggles with accepting this latest chapter in life—not to mention how much technology has advanced—she finds solace in loving the family she lost and living a much calmer life nowadays—something she’s quick to joke about. “It is simple and it is quiet. I’ll guarantee it!”

Mary Bounds, the 101-year-old resident of Brandywine Senior Living at Moorestown Estates is a vibrant centenarian, who to this day, can play piano music straight from memory. “I can sit for an hour and just go from tune to tune [from over the] years,” she says proudly.

Bounds was born in West Cape May, where she was raised in the midst of segregation and the Great Depression. Despite it all, she thrived in school, which is where many of her favorite memories take shape. “I look back on those four years of high school and oh, I had such a good time,” she laughs, adding that the day she learned she graduated at the top of her class “was one of the highest points in my life.”

As for her musically inclined talents, Bounds credits her parents and two older brothers. “From the time I was big enough to dangle on [my father’s] knee; I could still go back to memories of every Friday when he got his salary from his week’s work, he would stop at the music store, and buy a record,” Bounds remembers. “I had it ingrained in me; I never was without hearing music.”

When Bounds was just 8 years old, she was classically trained on the piano using Theodore Presser Music instruction. Much to the pressing suggestion of her instructor, Bounds forwent further musical training and studied to become a teacher instead. “My ideal career was to become a kindergarten teacher,” she explains. “[I was] not interested in music as a career, but I always participated in [it].”

The Glassboro State College graduate continued to play piano later in life, including at college parties—which led her to meet her late husband of 61 years, Charles—and at the church, where she eventually became the choir director and organist for Bethel Ame Church in Moorestown for 40 years.

When it came to teaching, Bounds taught at segregated schools in Smithfield, N.C., and Cape May for a combined total of 10 years, and after an 11-year break to raise four children, she re-entered the workforce in 1955 in Mount Laurel at the height of the Brown v. Board of Education ruling. She taught for 29 more years until retiring at age 70. “I have missed it so much,” she longfully adds.

With Bounds nearing her 102nd birthday, she credits her faith as a driving force behind her long life. “I am quite a believer and everything I have done has been because of my spiritual faith,” she explains. “I didn’t look forward to being alive at 100. ... I’m still waiting to see what more God wants me to do.”