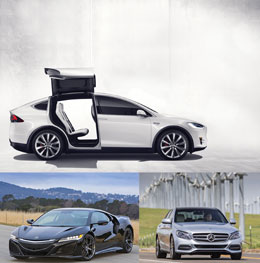 Up the ante with the newest offerings from some of our favorite car manufacturers, from classic luxury models like Audi and Mercedes-Benz to greener, yet equally well-appointed, selections from brands like Tesla Motors. edited by Rachel Morgan

Tesla Model X
Called the cleanest SUV on both the inside and outsideâthink zero emissions and the first true HEPA filter system available in a carâthis new model from Tesla Motors has a laundry list of other high-end features, including a forward-looking camera, radar, 360-degree sonar sensors that allow the vehicleâs advance autopilot features to function and a 17-inch center touchscreen that integrates media, navigation, communications, cabin control and vehicle data.
Convenience-minded features, like Autosteer and Autopark, add to the mix, as well as double-hinged Falcon Wing doors that open up then out. Itâs also fast: the Model Xâs electric powertrain accelerates from 0-60 in 3.2 seconds and hits speeds as high as 155 MPH, and has the lowest drag coefficient of any SUV in historyâwhile simultaneously producing zero emissions.
Safety isnât an afterthought either as the Tesla Model X gets a five-star safety rating in all categories.

Acura NSX
The new Acura NSX embraces classic sports car traits, like a rigid and light chassis with mass low and close to the driver, but also takes into account advanced technologies like a modern hybrid power unit.
It also boasts the automobile worldâs first use of ablation casting technology; top-notch aerodynamics targets without the use of active aerodynamic elements; and an all-new, 3.5-liter twin turbo V-6 engine. The NSX also features an all-new longitudinally mounted twin-turbo V6 engine combined with an Acura-developed 9-speed DCT with an electric motor.

Mercedes C Class
An ideal melding of elegance and sportiness, the new Mercedes C Classâ roomier, handcrafted-style interior is complemented by the vehicleâs LED headlights, keyless start, sport suspension and a panorama sunroof, which all come standard. Or drivers can kick it up a notch with the sport appearance package, which calls for special bumpers and sills featuring AMG bodystyling, a diamond radiator grille with pins in chrome and 18-inch light-alloy wheels.
For safety it has attention assist, which warns the driver of inattentiveness or drowsiness; collision prevention assist plus, adaptive brake assist, which can avoid collisions by boosting the brake, and braking in response to stationary vehicles at speeds of up to 31 MPH.

Porsche 2017 911 Carrera
While the 2017 Porsche 911 Carrera has the typical updates one might expect in a next generation vehicleânew headlights, taillights and a dashboard touchscreen display with smartphone-like controlsâ itâs the 3.0-liter twin turbochargers now affixed to the old familiar flat-six engine that really up the ante, increasing the carâs top speed to 183 MPH.
The new Carrera also now comes standard with the Porsche Active Suspension Management, a new steering-wheel-mounted drive-mode selector on models equipped with the Sport Chrono package, featuring normal, sport, sport plus, and individual drive settings.
Other notable features include a front-end suspension-lift feature that can raise the car 1.6 inches vertically to navigate steep driveways and speed bumps, and rear wheels that are half an inch wider.

Audi A5 Cabriolet
The A5 Cabriolet is an aesthetic blend of sport performance, stylish design and top-down driving, sure to impress even the most discerning of car aficionados. Boasting a standard turbocharged TFSI engine, Quattro all-wheel drive, signature technologies that keep you plugged in and in tune and a design that is pleasing to the eyeâwhether the top is up or down.
Key features include Xenon plus headlights with LED daytime running lights, 10-way power front seats and four-way power lumbar adjustment for the driver.