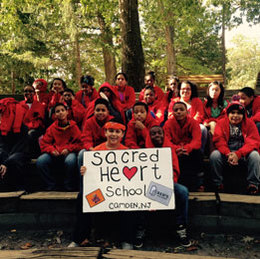 344,000: Number of acres of open ocean to be auctioned off the coast of Atlantic City by the U.S. Department of the Interior for offshore wind development.

27: Number of fleece pullovers Gov. Chris Christie owns, nearly all of them given to him after Hurricane Sandy.

$1.95 million: Cost a of 65-acre fossil quarry in Mantua Township purchased by Rowan University. The school plans to preserve it for research and open a science center on site.

$199,969: Amount of a Robert Wood Johnson Foundation grant the Rutgers School of Nursing—Camden received to help improve the health of Camden teens and their families.

FOUR: Number of students in Pitman diagnosed with viral meningitis. The Gloucester County Department of Health said all are expected to recover.

11/5 – 11/8
Get up close and personal with a Weeki Wachee Mermaid at the Adventure Aquarium. Guests will witness mermaids swim and get the chance to meet one. 10:30 a.m. to 12:30 p.m. and 1:30-3:30 p.m Thursday- Friday, with additional times Saturday-Sunday. 1 Riverside Drive, AdventureAquarium.com, general admission

11/24
Go for a moonlit walk at the Long Bridge Park alongside the park crew. You’ll get a nocturnal look at the animal nightlife and a chance to gaze at the stars. The only requirements? Register, bring binoculars and dress warmly. 5:30-7:30 p.m., Long Bridge Park, 895 Deacon Road, Hainesport, Co.Burlington.NJ.US/parks, free

Burlington, Camden, Gloucester and Salem counties are among four of the top five counties in New Jersey who have seen an increase in tourism totaling over 11 percent in growth.

On Jan. 1, Cherry Hill will move to automated trash pickup. Each household will be given a 96-gallon wheeled trash can, which can be emptied into trucks and replaced on the curb by automated arms, saving about $1.35 million, compared to manual trash pickup.

Garden State Discovery Museum Center for Learning in Cherry Hill is the recipient of an $18,500 general operating grant to help expand its theater program.

A $65 million bond referendum was rejected by Northern Burlington County Regional School District. The bond would have funded additions and upgrades to the high school. A new “Mega Million” brand of heroin is the source of several fatal and nonfatal overdoses in New Jersey, the state police says.

A West Windsor nurse administered the flu shot to 67 pharmaceutical employees by re-using the same syringe. All recipients must now be tested for HIV and Hepatitis B and C.

Bestselling author Mitch Albom has started his own water ice company in Detroit with recipes from South Jersey.
Page 34

Hugh Jackman is a big supporter of the Philadelphia Union.
Page 62

With a day’s notice you can book a $5,000 spa treatment at Caesars in Atlantic City.
Page 68

“This never gets old.”
—Cheryl Reeve, head coach of the Minnesota Lynx of the WNBA. The former star Washington Township basketball player led the team to its third championship in the past five years.

Burlington County: Moorestown
A Maple Shade man was charged with two counts of burglary and theft after burglarizing two Moorestown homes, police say. The suspect allegedly stole jewelry and cash worth about $500.

Camden County: Cherry Hill
As a suspect fled a bar fight at Cherry Hill’s Craft House and Beer Garden, police report he accidentally shot himself. The Pennsauken resident was charged with unlawful possession of a weapon.

This month, on Page 24 of South Jersey Magazine, we visit with some South Jersey centenarians who are still making the most of life. Share your opinion by visiting SouthJersey.com’s Voice and Vent section and answering:
“Would you like to live to be 100?”
Click on “Submit” to make your vote count. Next month, we’ll report back on what our readers are thinking.

Last month, we asked:
“Do you volunteer your time to help others as much as you’d like to?”
83% of you said No
17% of you said Yes

Daniel Marcus (pictured), a fifth grader of Thomas Paine Elementary School in Cherry Hill, is cooking up something good for his community. The 10-year-old entered Uncle Ben’s Beginners Cooking Contest to win a cash prize of $15,000 for his family and a $30,000 cafeteria makeover for his school.

But here’s the savory part: if he wins, Marcus has elected to give the $30K earnings to Camden’s Sacred Heart School—which doesn’t have a cafeteria of its own. His good act is supported by his fellow classmates and his principal, Kirk Rickansrud, who is “100 percent behind it.” What’s more, Sacred Heart couldn’t be more grateful.

Why did you choose to help Sacred Heart School?
Daniel Marcus: My family has been a friend to Sacred Heart for the past 10 years and I wanted to help. It’s sad they have to use the church basement [as a cafeteria] or stay in their room to eat lunch.

What kind of improvements do you hope the makeover gives Sacred Heart?
I hope they can do some things [to] improve what they have now. [Sacred Heart’s Principal, Janet Williams] is super excited, she said they need a new freezer.

How did you get interested in cooking?
[My] Mom and Dad are good cooks and my 13-year-old brother really likes to cook. My favorite meal is steak, rice, and broccoli with garlic so that is the recipe we submitted in the contest.

What inspired you to enter the Uncle Ben’s Beginners Cooking Contest?
I wanted to help Sacred Heart School and I like making movies. I’m also excited to use part of the winnings to take a trip to Universal Studios.

What did you think of Daniel’s decision to cook for Sacred Heart?
Thomas Paine Principal Kirk Rickansrud: It was heartwarming to know young people are socially aware of making a difference in this world. He is truly special and should provide as an example to others.

How is he proving to be a positive influence?
He is an inspiration. He has his peers and school community supporting and cheering him on.

What did you think when you heard Daniel wanted to help Sacred Heart?
SH Principal Janet Williams: I was very touched to find someone so young want to help others is special. Win or lose, we have been blessed by Daniel’s kindness.

How has Sacred Heart been operating without a fully-equipped cafeteria?
Sacred Heart Church kindly allows us to use their cafeteria, which is located in the basement of the church, for our lunch program. The space limits us and the lack of enough freezers and a small oven makes ordering and cooking a challenge. Several times a year we cannot use the cafeteria due to church events, so we usually order from other vendors or try making lunches in crock pots and hot plates in the teachers’ lounge.

What do you hope to do with the donation?
Another freezer, a better oven, supplies, a newer dishwasher, and large umbrellas for walking between the school and cafeteria on rainy days, are just a few of things that come to mind.

Five students are eligible to win the contest, which will be based on the most votes for their cooking videos. Voting ends November 3 on unclebens.com.

Erin Lawler
Lawler, a counselor at Seneca High School, was chosen as the 2015 W. Cary Edwards State Volunteer of the Year by the Governor’s Council on Alcoholism and Drug Abuse. She was nominated by Tabernacle Municipal Alliance for her work with the alliance developing alcohol and drug programs for Seneca and local schools, including the Drug Squad, which helped students engage in a drug- and alcohol-free culture.

Emily Turnure
Turnure, M.S.N., R.N., administrative director of education and accreditation at Inspira Health Network, was one of six national winners to claim a 2015 Nursing Excellence GEM Award by Nurses.com. Turnure was named a regional finalist receiving the Philadelphia Tri-State Nursing Excellence GEM Award, then was selected as one of six national award recipients out of the 54 regional winners.

Jeffrey H. Gottlieb
Gottlieb was recently appointed president of the Katz JCC. The Cherry Hill resident was on the JCC’s Board of Directors for more than a decade, was vice president since 2010, was the JCC Camps at Medford chair and chaired several of the center’s major fundraisers. He holds various positions including executive vice president of ResinTech Inc., an ion exchange resin manufacturer servicing the water treatment industry.

Amanda Ketterer
This 17-year-old Cherry Hill resident was named a 2015 honoree by the Gloria Barron Prize for Young Heroes for her work creating the Chimp Aid Café, which raised money to help chimpanzees. First inspired to help as a third grader after reading Jane Goodall’s book, The Chimpanzees I Love: Saving Their World and Ours, Ketterer has donated nearly $25,000 to Jane Goodall Institute’s animal programs.

Chelsea Collins
Woodstown Middle School’s Collins was named South Jersey’s Teacher of the Year for 2015 by the New Jersey Department of Education. The Washington Township native teaches sixth grade language arts, serves as the grade’s Academic Team Leader and has been a force behind WMS’ Independent Reading Program. She was also named Salem County Teacher of the Year for the 2015/2016 school year.