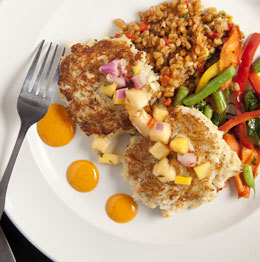 One of the handful of restaurants to call Camden County its new home is Glendoraâs Kitchen 519. Itâs the first restaurant for executive chef John Stewart, who cut his teeth in the kitchens of Bonefish Grill and McCormick & Schmickâs. Stewart opened up his newest venture with his wife, Dana, and has been serving up New American food right off Evesham Road ever since.

Opened in the spring, the space still has a bit of an unfinished look to it. You almost canât help but walk straight into the kitchen, placed right next to the hostess table without a curtain or door to separate the two spaces. The colorful aprons lining the narrow entrance donât seem to fit the upscale, New American menu and feel of the dining room, where mismatched, contemporary art sits on homey, robin egg blue walls. The stack of worn-down Trivial Pursuit cards from the â80s sitting on each table, accompanied by a handful of dominoes and the occasional playing card stuck in the deck, did nothing to help the vibe. The home-cooked feeling battled against elevated and modern touches, and made the space ultimately feel uncomfortable and out of place.

The appetizer selection had the same out-of-place vibe, featuring nachos next to mussels and tacos alongside calamari. And does any selection of small plates really need two varieties of quesadilla? The Cuban quesadilla, with roasted pork, diced pickles, salami and Swiss and cheddar cheese with a ground mustard aioli packed some flavor with house-made pork and a hit from the mustard, but I would have liked to see a lot less cheese and a lot more pickles, as the cheeses masked the briny bite that was desperately needed from the pickles.

That wasnât the issue with the small plate of fried pickles that arrived, cut into thin slices and breaded with corn meal. The house-made ranch and jalapeno dipping sauces that accompanied the plate were a thoughtful accompaniment and hard to resist, but corn meal batter was gritty and had already crumbled off the pickles, before it hit the table.

But entrÃ©es quickly redeemed the disappointing appetizers and setting. The star of the evening was a plate of macadamia-crusted chicken, served with a rum beurre blanc sauce, roasted potatoes and sautÃ©ed arugula. The chicken was so juicy and had just the slightest hint of sweetness from the macadamia that hit the palate at just the right moment. It brightened up the dish, while the beurre blanc followed with a smooth buttery taste. Roasted potatoes were perfect for dipping in that sauce; while the arugula added another fresh and peppery bite to the plate. You donât find many truly innovative, memorable bites of chicken breast, but this is one that I wonât soon forget.

The 12-ounce filet was served simply alongside a medley of sautÃ©ed kale and carrots with garlic mashed potatoes that were seasoned to perfection. It was one of several steak options available, and was tender with a nice crusted exterior, just what youâre looking for when diving into a really well-prepared steak. It came topped with two cloves of slow-roasted garlic, which were so soft that you could spread it over the top of the steak like butter to add just another element of flavor. And while the accompanying sides were simple, the carrots and kale were extremely flavorful and well-cooked.

While the crab cakes were a bit crumbly and falling apart upon their arrival to the table, the flavor of the cake itself was meaty with just the right amount of spice. Had the mango in the accompanying salsa been given the time to ripen it would have been a great accompaniment, but instead it was overpowering and slightly woody; the cake would have done better on its own. The crab cakes came with the same kale and carrot medley that appeared with the steak, but also came with a red pepper faro, which was like a meatier, creamy alternative to brown rice served with diced bell pepper and onions.

The dessert selection was particularly extensive; featuring dishes made both in-house and from the outside. The cinnamon bread pudding was one of the house regulars, served with a whiskey caramel sauce, whipped cream and a scoop of vanilla ice cream. Served warm, the bread pudding was creamy with plenty of sweetness and the right amount of cinnamon, though the sting of the whiskey was evident in the caramel sauce.

The chef also whips up a seasonal crÃ¨me brÃ»lÃ©e, to accompany the standard variety sold every day. In this case it was Mexican chocolate style: creamy and deep with a fantastic sugary crust that added crispiness to every bite. Meanwhile the spice that is promised with Mexican chocolate helped to cut the richness, as did a heavy helping of whipped cream.

There was a lot to like at Kitchen 519, but still a lot that left me guessing. If the team of chefs and staff can iron out a more solid menu, and present a dining room that better reflects the stunning entrÃ©es they are putting out, then I see this restaurant only continuing to bloom.