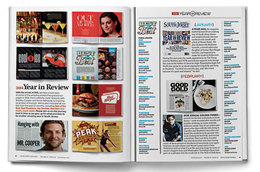 With the arrival of 2015, we take a look back at some of the amazing stories that graced our pages in 2014, from celebrity cover features with Bradley Cooper and Anne Hathaway to inspiring local tales of triumph. We’ve also included all our lists from the past 12 months, including Best of the Best, Best Doctors, Top Dentists, Best Bars and much, much more. Please join us on this journey back in time as we gear up for what promises to be another amazing year in South Jersey.

The Best of Home & Garden

{JANUARY}
A year ago, the magazine kicked off our yearlong tour of South Jersey towns and neighborhoods (the tour continues this month with a look at Mount Holly). We also chatted with Stephanie Lemelin, a Sewell native and daughter of former Flyer Reggie Lemelin, just beginning to make her mark in Hollywood. During the past year she made appearances on The Young and the Restless and NCIS and will star opposite John Savage this year in the thriller A Cloud So High. Philadelphia Eagle Earl Wolff also spoke to us about playing for Chip Kelly and living in Deptford. “I’m kind of a country guy, and I like it here because it’s quiet and relaxed,” he said.

{FEBRUARY}
Our annual Golden Forks—awards for the best restaurants in South Jersey—were revealed after months and months of dining on some seriously delicious meals. One of our writers also spent a few days with the folks living in Camden and Deptford’s tent cities and found the residents to be genuine who were looking for real help, and not just a handout. Since our story, Camden has shut down their tent cities leaving many of these people in situations of uncertainty once again. Grammy Award winner and Mount Laurel native Chris DeStefano told us what it was like penning songs for some of music’s biggest stars and Washington Township’s Dean Auer gave us a glimpse into his small role in The Wolf of Wall Street.

{March}
Demi Lovato graced our March cover just as she was strolling into Camden for a blowout performance. The Disney star turned pop icon was forthcoming about her troubled past and her bright future. “I am honored and motivated to know that my story has helped and will continue to help others,” she told us. And area golf pros ranked the courses in the area, we found out what makes Sixers coach Brett Brown tick and another Top Chef winner from South Jersey was crowned on the Bravo food competition show when Collingswood’s Nicholas Elmi took home the title.

{APRIL}
To celebrate our 10th anniversary issue, new Phillies manager Ryne Sandberg sat down with us at Citizens Bank Park for an exclusive interview. After a rocky season, the Hall of Famer has his work cut out for him again this year but remains fiercely dedicated to turning things around sooner than later. Cherry Hill’s Alicia DiMichele told us what it’s like being a single mom and a star on VH1’s Mob Wives. In August, DiMichele was sentenced to four years probation for her involvement with helping her ex-husband steal from a union welfare fund. She is no longer on the show but continues to operate her Addiction Boutique stores in Cherry Hill and Philadelphia.

{MAY}
For the first time ever, we ranked the Best Bars in South Jersey, from swanky cocktail lounges to the best places for craft beers. Haddonfield once again ranked No. 1 in our annual Top Towns feature, with Medford, Moorestown, Marlton and Harrison Township rounding out the top five respectively. We heard from Bishop Eustace’s Devin Smeltzer, a star baseball player that overcame cancer to help inspire other children in similar situations. He would go on to be drafted by the San Diego Padres but instead chose to accept his full scholarship to Florida Gulf Coast University. He will be eligible for the MLB draft again in three years.

{JUNE}
We traveled to our favorite summer playground for our Best of the Shore issue. We went town by town, from Long Beach Island to Cape May for our picks of the best places to eat, shop and more. Speaking of the Shore, we caught up with the always-on-the-go Jerry Blavat to find out how the Rock and Roll Hall of Famer stays so energized after more than five decades in the entertainment industry. “I’m one of the luckiest guys in America, because I’m able to do what I love to do, and that’s play my music,” he said. In keeping with the Shore theme, we caught up with Brigantine’s Nicole Gaffney, a personal chef who made it to the final three on The Food Network’s Food Network Star.

{JULY}
There were 138 winners in our Best of the Best issue and why some may disagree with our selections, you can’t really argue that these places are deserving of the honor. From cupcakes and water ice to jewelry and facials, it was the culmination of a year’s worth of research to come up with the ultimate South Jersey resource guide. Local music writer Randy Alexander took us down memory lane with some vivid recounts from the days of the Latin Casino as told by some of the people who frequented the legendary nightclub. Comedian Wanda Sykes also told us about what she enjoys about living in the area and famed chef Jose Garces told us why Moorestown was the perfect place for him to expand his culinary empire.

{AUGUST}
Heartthrob Bradley Cooper turned up on the cover this month and spoke about his series of upcoming films and spending time down the Shore while growing up in Jenkintown, Pa. We spoke with several folks including Mayor Dana Redd to take an in-depth look at Camden and the battle to restore its reputation. Since our discussion the city has seen several new businesses target the city, including Subaru and Lockheed Martin while the Sixers have announced they will be building a new practice facility and executive offices there as well.

{SEPTEMBER}
We slowed Eagle LeSean McCoy down just enough to appear on our September cover. The Marlton resident spoke to us about football and family and how he’s found a home in South Jersey. In December he would go on to set the Eagles all-time career rushing record despite an up and down season. We also shined a spotlight on some of the more remarkable local doctor/patient stories in our Tales of Triumph feature; ranked our public high schools; spoke with singer/songwriter Colbie Caillat; and found out how one recent Rowan grad turned her surprise bestselling novel into a Hollywood film.

{OCTOBER}
Cherry Hill’s Cristin Milioti posed for our October cover and spoke to the magazine about her newest show, A to Z. Though the show didn’t get the ratings NBC had hoped for, Milioti remains hot as ever thanks to a recent string that included a Tony nominated performance in Broadway’s Once, a star turn on How I Met Your Mother and a role as Leonardo DiCaprio’s wife in The Wolf of Wall Street. “I could pinch myself. I can’t believe that all this has happened. I don’t lose sight of the fact that a lot of this business is dumb luck. I’ve worked really hard but been lucky as well,” Milioti said.

{NOVEMBER}
Hollywood leading lady Anne Hathaway, a Cape May regular, talked about her film Interstellar, married life and being an Oscar winner. “It’s a beautiful thing. But in terms of my life, I don’t think it’s necessarily had as big an impact on my life as you might think, not my life certainly,” she said. We examined Atlantic City’s struggles from all angles, speaking with several local leaders and city officials. Since our story, Stockton has officially announced plans to buy the shuttered Showboat and the Atlantic City Alliance announced they would disband to better distribute funds in the city, but the Taj Mahal remains in limbo and buyers set to take over Revel have pulled out of the deal. Cake Boss Buddy Valastro spoke to us just ahead of the opening of his new Marlton location, which saw steady lines out the doors once opened. Unfortunately, after appearing in Marlton one November afternoon, Valastro was arrested for DUI in NYC later that evening.

{DECEMBER}
We closed 2014 out with a bang thanks to our first-ever Best Burgers rankings. We sampled burgers all across South Jersey, from fine dining restaurants to reliable diners to find 42 perfect patties. We also introduced the area to some Top Nurses, our annual Awesome Attorneys list and spoke with Flyer Jake Voracek off the ice to get a unique glimpse into the Czech Republic native’s life.