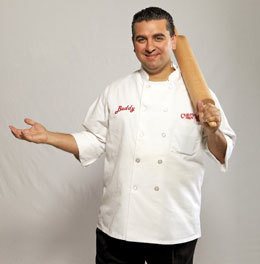 Whether you know him as Cake Boss or just Buddy, chef Buddy Valastro has earned a pretty sweet reputation. The owner of the 104-year-old, family-run Carloâs Bakery in Hoboken became an overnight hit in 2009 with the premiere of his reality show Cake Boss on TLC, which documented the day-to-day operations of Carloâs and followed Valastro and his wild family as they constructed some of the worldâs most ambitious cakes for a series of equally-ambitious clients.

What followed was another three television showsâThe Next Great Baker in 2010, Kitchen Boss in 2011, and Buddyâs Bakery Rescue in 2013âa full line of bakeware, and an additional six Carloâs Bakery locations, including spots in Times Square and Las Vegas.

Valastro and his team have recently announced the opening of their eighth location, right in the heart of Marlton. This will be the sixth Carloâs to grace New Jersey, but the first South Jersey location to serve up Carloâs classics like cannolis and their famous lobster tail pastries.

We spoke with Valastro as he preps for an end-of-the-year opening to hear about his plans for the bakery, the keys to his familyâs success and how he maintains their integrity amidst ever-changing trends.

SOUTH JERSEY MAGAZINE: Your family bakery went from being a local legend to an international hit in the course of a few years. What has the last five years been like for you and your family?
BUDDY VALASTRO: These last few years have really been an incredible journey. For a lot of reasons, we expanded the bakery outside of Hoboken for the first time, weâre shipping nationally, Cake Boss is shown in over 180 countries worldwide. Itâs just amazing. To me, itâs so important to reach my fans and all of these things have let me do that.

SJM: How do you balance all of the new components of your familyâs business?
BV: You know, we juggle a lot, but the whole family is used to being busy, so itâs just a matter of working together to get everything done.

SJM: With eight locations opening up in such a short time frame, whatâs your key to maintaining the quality that has made you so renowned?
BV: Quality is extremely important to me. Iâm a very hands-on person, so I make sure that every bakery is meeting high standards. I want my fans to be able to visit any of our locations and get the best quality product.

SJM: How do you approach the ever-changing âfoodieâ trends out today in such a traditional bakery setting as Carloâs?
BV: I definitely stay on top of the trends, especially with cake design. A lot of brides will come in wanting whatâs âinâ now for their wedding cake and my team makes sure they are on top of it. The thing is you have to stay current while being true to yourself, so weâll introduce new items here and there, but we also keep doing what we do best with our signature items like the lobster tail and cannoli.

SJM: Do you have plans to provide desserts that are regional for just South Jersey?
BV: We will probably have some items that embrace the area. What those items are, itâs too soon to say.

SJM: What is the must-have dessert first-timers should try at the new South Jersey location?
BV: Hands down, the lobster tail.

SJM: Your show made you a legend for some seriously over-the-top cake designs. Is that something your team plans to bring to the Marlton location?
BV: Whatâs great about Carloâs Bakery is weâll make you any cake you want. You want a cake that moves, jumps, and lights upâwe can do that, but if you want a single-tier buttercream cake for a birthday party, we can do that too.

SJM: First there were cupcakes, now doughnuts: Where do you see the next big trend in baking going?
BV: The cronut really launched this whole trend in pastry mash-ups and I think thereâs still a lot more to explore here. This trend will be around for awhile.