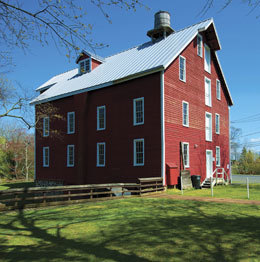 Turning Over a New Leaf

A new administration on balancing historic Medfordâs charms with the need for change.

On the surface, Medford, a 44-square mile township in Burlington County, seems to have it all. Its 23,000 residents enjoy a historic Main Street, a bucolic wooded location situated between local farms and the Federal Pinelands Natural Reserve. The township also sits in a prime location, just 30 minutes from Philadelphia and 45 minutes from the Jersey Shore.

Medford itself has about 8,000 homes, from Victorians to log cabins to new developments; and 50 percent of the township is dedicated as open space, blending in with its quiet, wooded surroundings. While the township has retained much of its historic charm, with attractions like Medford Village Main Street and annual events like the Dickens Festival, it hasnât always been an easy road. Local officials have worked to simultaneously retain the townâs charm while also attracting new developments and businesses. Medford has also been tasked with overcoming a mayoral scandal, various legal battles, questionsabout no-bid contracts and the township, even very public squabbling amongst township council members.

But itâs been three years since a new administration has taken overâand it seems that things are on the upswing. Mayor Chris Buoni has focused much of his effort on attracting new businesses to the township, as well as building up what Medford already has to offerâlike historic Medford Village and Main Street.

âWe created a rehabilitation zone for Medfordâs downtown area, because this area is very important to the residents. They want to see it thriving. We did a couple things to improve this area,â he notes, including a change to the townâs sign ordinance. New signs, he says, help businesses be recognized and identified by potential customers.

There are some new businesses moving in, as well. âWeâre excited about the Pop Shop coming here,â Buoni says of the 1950âs-inspired diner/soda fountain that is currently under construction on Medfordâs Main Street, the restaurantâs second location.

âThe ownersâ vision is sort of a throwback to the 1950s, a community place where people can come, [there are] minimal electronics in itâno TVs, no noise. The goal is to get people talking across the table, and at the same time, get people talking to people at other tables,â Buoni says of the 4,500-square-foot space, previously a bank. Medfordâs Pop Shop is expected to open in late fall. Medford will also be welcoming another beloved local chain, the RunningCo.

âThatâs one of those places where people will drive a really long way because theyâve got excellent customer service and a high-end product line. So if youâre a serious running enthusiast, now you donât have to drive 45 minutes to go get a good pair of shoes, you can just come right downtown,â Buoni says.

This will be the fourth local location for the running shop, which currently has stores in Haddonfield, Mullica Hill and Moorestown. RunningCo. Owner Dave Welsh says the decision to move into Medford was based on several reasons.

âA lot of our current customers come from Cherokee High School, and [the Medford] location will be a lot closer for them,â he says. âItâs [also] got a lot to do with what [Buoni] is doing out there, with the Pop Shop coming in, possibly a microbrewery, some new restaurants.â Welsh says the goal is to get the shop up and running before Thanksgiving.

As it is now, Main Street is already dotted with restaurants and shopsâa womenâs boutique, lingerie shop, restaurants, a cigar shop, a local lunch spot, a coffee bar, even a gift shop. And Buoni wants more.

âWe canât guarantee their success, but we can make it easier for them [with] tax abatements, and not just minimizing the regulations, but instead of having contradictions, streamlining everything, so a business can come in, understand exactly what they need to do and analyze their cost. So [we] are minimizing their risk,â Buoni says.

With these changes, Buoni hopes to attract and foster the growth of even more new business to the Medford area. âIâd like to have a brewpub in town. So we changed the regulations on Main Street to allow microbrewing and microdistilleries.â

And itâs definitely been a struggle between maintaining Medfordâs historic charm and embracing the new, he admits.

âWeâve got this Main Street area to attract people in. I want to make sure that thereâs an experience that people have,â he notes. â[What will draw people here] is kind of a high-end experience, but that experience I think needs to start from the time you find a place to park, the walk from your car to where youâre headed, and what you can do along the way. ... You start looking a little closer [at some of the buildings on Main Street,] and youâve got issues where the buildings are starting to get run down. A lot of this is because in the past, the Historic Society had so many restrictions on what people could or couldnât do, they restricted it so much that they restricted it into disrepair. Now, there is no Historic Society. We havenât appointed anyone to that board. You used to have to get approval from the Historic Society before you could make any changes. Thatâs no longer the case.â

Medford also recently put its liquor license up for bid, another big development. âThe money [from the sale of liquor licenses] goes into the general fund. Our policy at the end of the year, if we have money that we didnât anticipate in the budget, it goes directly to pay down debt. We donât spend it. Everything is about getting our debt paid down,â Buoni says, noting two more may also go up for sale. âOnce we get that down, all of a sudden, weâre going to have a lot of ability to make some choices. Do we want to do tax cuts? Do we want to improve services?â

There are other big developments in the works for the township. The Village of Taunton Forge will be getting a facelift. The 40-year-old shopping center recently received approval from the township to begin preliminary plans to renovate the center, a plan fiercely debated amongst residents. The shopping center is located at the intersection of Taunton and Tuckerton roads, and one of the major points of the redevelopment will be providing a larger space âup to 60,000 square feetâfor a supermarket to anchor the center. Plans also include attracting more retailers and restaurants.

âWe need to change with the times by offering a shopping center that will attract quality retailers and restaurants that will serve area residents,â says David DePetris, who owns the shopping center along with brothers Jim and Steven DePetris, and their 94-year-old father, Joseph DePetris. âWithout question, The Village of Taunton Forge is the best location in Medford, situated in the heart of all the beautiful lake communities.â

And Buoni has big plans for even more development in Medfordânamely, on Route 70.

âWeâre going to probably change the zoning on Route 70 to make it more attractive to commercial entities that want to invest in our community,â he says. âWhen Home Depot was going to build, there was a knee-jerk reaction after the fact to limit the size of the building to 35,000 square feet. Itâs impractical. And the problem is, [before,] the goal was to say we donât want big box retailers on Route 70. That was sort of the sentiment that drove that. But when you come up with a regulation that stops one particular thing without considering your overall planning goals, you end up with a very poor plan.â

Buoni says he hopes to change that 35,000 square foot cap for retailers. The reason? Self sustainability. âI think itâs important for a community of this size to be as self sustainable as possible,â he explains. âWeâre large enough that I believe itâs important to have access locally to wants and needs. For example, if I needed specialized medical care, I may have to drive 25 minutes away to go get it because youâre not permitted to build a facility here thatâs large enough that can have that many specialties or that many medical offerings. If I wanted to go see a movie, grab a nice dinner, have a couple drinks, I canât do that here. Iâve got to drive 25 minutes away.â

Local business owner Bob Wagner, who has owned Braddockâs on Medfordâs Main Street for six years, knows all too well how important it is to attract people downtown, rather than letting them spend their dollars elsewhere. âThatâs the toughest part, changing peopleâs mindset. People will drive though downtown and theyâll go to Collingswood and Westmont, or Hammonton, and weâre thinking, âWhy donât you stop in Medford?ââ he says.

But Wagner says the new administrationsâand the resulting changes in local regulationsâhave made a big difference to his business.

âThis is the best administration weâve had since weâve been here,â he says. âThe town was very business-unfriendly, and that reputation was still out there. â¦ These guys now that are in [office now] are wonderful. They actually work and are business-minded. Theyâre business-friendly and they actually understand that if we donât get rateables and grow business in this town, the townâs going to be non-existent. Thereâs going to be nothing left and everyoneâs taxes are going to go up.

But like anything, itâs a process. âIf you still ask around, there are a lot of people that say, âI canât believe youâre in Medford.â And I [say,] âNo, Medford isnât the way it was back in the day. Theyâre pro-business now. They like business. And theyâre supportive,ââ Wagner says. âThe old daysâand itâs still lingering out thereâ[Medford] was very business-unfriendly. But that has to change. And it is changing. Slowly, but like anything else, it just takes time.â