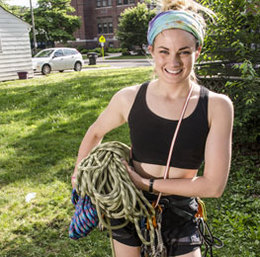 Discovery Channel’s Naked and Afraid has been an instant fan favorite since first airing in June 2013. The reality show drops two total strangers in the middle of nowhere with no clothes, food or supplies, then leaves them to fend for themselves for 21 days. Those who make it are given nothing but an updated Primitive Survival Rating—or PSR, to those who have seen the show—to add to their résumé.

It’s a premise that seems a bit laughable and certainly awkward enough, but this survival expedition is no joke. Competitors are wilderness experts: hunters, survivalists and naturalists who must adapt and exist in a foreign environment with absolutely no help.

Which brings us to Medford’s Danielle Beauchemin. The 25-year-old rock climbing instructor and volunteer wilderness EMT for Greater Philadelphia Search and Rescue recently returned from a month-long stint on the show; and told us she’s still adjusting to life back in South Jersey. Beauchemin’s episode premieres on Dec. 14, and while she couldn’t divulge too much about her Naked and Afraid appearance, she shared just how difficult the reality experience was.

SOUTH JERSEY MAGAZINE: How did you decide to try out for Naked and Afraid?
DANIELLE BEAUCHEMIN: I’ve always been into survival. My dad taught me a lot and I was working as a wilderness EMT for search and rescue. That was where I heard about the show in the first place. I applied and didn’t think anything of it, but then they contacted me. Even then they didn’t tell you much, they said be ready from April to August. They’d call me randomly and put me through a survival situation on the spot. Once I passed a few of those they did a fitness test and personality test and a medical clearance and some other screenings to make sure I was fit to be on the show. They have to make sure you aren’t going to kill and eat your partner.

SJM: What was it like making it onto the show?
DB: They only gave me 10 days notice; and they don’t tell you anything. They book your flight and tell you it’s either going to be in a jungle, a swamp, an island or a desert, which is no help at all. … I was a little bit afraid. I didn’t tell anyone that I was going through the whole application process. I didn’t tell my dad until 10 days before I had to leave. But surprisingly enough everyone was really supportive. My mom is a dental hygienist and her biggest worry was about my teeth and how I’d clean them when I was on the show. She actually scheduled a cleaning for me the day after I got back home.

SJM: Did you even have time to prepare for what was to come?
DB: I immediately changed my diet. I cut out sugar, caffeine and anything that might alter my body physically. I put on extra weight and was eating extra carbs; if I wasn’t able to find food I wanted to have a reserve. I started working on my weaknesses, which were hunting and trapping. I’ve been a vegetarian since I was 4 years old so I knew nothing about that and I wanted to be ready. That was one of the biggest challenges for me, dealing with the fact that I was a vegetarian. I always chose to be this way and I never had to hunt for my own food. I was mentally preparing myself for that part of the show. But I got my mindset ready to survive, even if that meant killing and eating animals.

SJM: Were you scared of being naked on national television?
DB: It was really weird for me at first, especially because you know you’re going to meet a stranger right on day one. But it helped to have a stranger to go through this with me. And after a while you just forget about it. But the cameras were strange for me—there’s no privacy at all. It was really weird, especially because we were naked and they were totally clothed. They’d follow you to go get a drink of water; even if you just want to leave and clear your head, there’s a camera right there.

SJM: What was the biggest challenge being on the show?
DB: For me, being there with a complete stranger was hard. I don’t really open up to too many people to begin with, and being in a completely new environment that I’ve never been to with a stranger was even harder. The show purposely matches up clashing personalities, so having to survive with someone I would never associate with was really difficult.

SJM: How did you get through it?
DB: The biggest survival tool is your mental attitude. You really have to mentally prepare yourself and learn to adapt to do anything with an open mind. If you have a negative attitude you aren't going to thrive. That was my most important accomplishment and what I had to work with my partner on as well. Even if on one day you just collect firewood, that’s an accomplishment.

SJM: What was it like getting back to South Jersey afterwards?
DB: Coming back was difficult. During the trip I really missed home, and I missed my friends and family, so I was thrilled to actually get back and see them, but I was gone for a full month. And after our 21st day the crew threw a party for us and it was weird seeing modern stimulations like music and lights and it was strange not to do the things I had gotten used to, like getting fresh water.

SJM: So what have you gained from this experience?
DB: I learned so much about myself, and I wouldn’t change a thing. Actually, I would do it again. It was terrifying, but I managed to conquer my biggest fears. I thought I was grateful for the simple things before, but now I can really appreciate what I have. I’m so proud of myself and of what I’ve accomplished. I can’t wait to show people what I went through and what I survived.