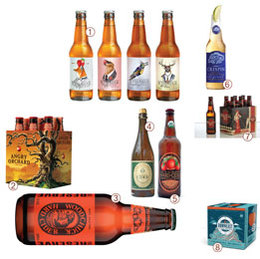 
by edited by Rachel Morgan

With fall finally on the horizon, we think itâs the perfect time to introduce some harvest-inspired brews into your repertoire. Think hard ciders, infused with everything from classic apple to the more unexpected, like ginger. So read onâand drink up.

1. Perfecting the Craft
Wyndridge's line of brewsâhailing from central Pennsylvaniaâfeatures various ciders, including apple and cranberry; as well as an ale and an IPA. While we love their crisp taste, weâre also partial to the whimsical labels. $13.99 for a six-pack at Martinâs Liquors, 3601 Route 38, Mount Laurel, (856) 235-2273

2. Ginger Rush
A more unusual take on hard apple cider from one of the most well-known cider houses, Angry Orchard Apple Ginger features a blend of apple and ginger notes, making for a smooth and refreshing ciderâwith just the right amount of tartness. $8.99 for a six-pack at Medford Wine and Spirits, 175 Route 70, Medford, (609) 953-8773

3. Pumpkin Proud
It wouldnât be fall without a nod to pumpkin, and Woodchuck Private Reserve Pumpkin fits the bill. The limited-run cider features pure pumpkinâalong with red applesâand pairs perfectly with dishes like roasted duck and squash ravioli. Where do we sign up? $8.99 for a six-pack at Joe Canalâs, 1075 Mantua Pike, West Deptford, (856) 464-8787

4. Mother Earth
A hard cider offering with earth and fruit undertones and a dry finish, Farnum Hill Extra Dry pairs best with spicy foods, like Thai or Indian dishes. Boasting a complex mix of fruit, acid and astringency, this pale gold cider also has a burst of bubbly. $12.99 for a 700ml bottle at Roger Wilco, 700 Haddonfield-Berlin Road, Voorhees, (856) 627-2667

5. Purist View
J.K.âs Scrumpy Orchard Gate Gold is made from twoâ and only twoâingredients: apple juice and yeast, with no artificial flavors, colors, sulfites or preservatives. Once harvested, the organic apples are pressed, and allowed to ferment for up to six months. Each bottle is then hand-filled and labeled and aged for several weeks, making for a unique, artisan cider. $6.99 for a 22-ounce bottle at Hops and Grapes, 810 Delsea Drive, Glassboro, (856) 582-8110

6. Crunchy Brew
A non-traditional cider hailing from Minneapolis, Crispin Original features notes of fruits and crunchy apple with a refreshing, crisp body. What more could you want in a hard cider? $6.99 for a four-pack at Total Wine & More, 2100 Route 38, Cherry Hill, (856) 667-7100

7. Traditional Pick
This traditional hard cider is fermented with types of champagne yeast with no artificial colors or flavors, making for a natural, apple-infused taste that doesnât disappoint. Perfect for the health-conscious set, this cider is 100 percent gluten free. Original Sin Hard Cider, $11.99 for a sixpack at Trainoâs, 100 Church Road, Marlton, (856) 983-0056

8. Post-Grad Pick
This cider is the flagship from a relatively new cider houseâstarted in 2011 by friends graduating from college. Theyâve since moved on from their humble beginnings, but the cider rules remain the sameâDowneast Cider Original Blend is made from local, freshly pressed apples and ale yeast, for a smooth, yet tart, perfectly tasty hard cider. $9.99 for a six-pack at Gloucester City Discount Liquor, 139 S. Broadway, Gloucester City, (856) 456-7227