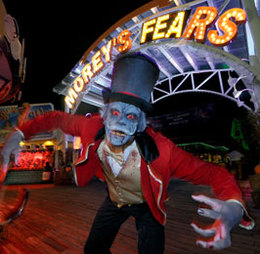 
by Frank Auletto
Seaside Terror
Get ready to scream: The once family friendly Moreyâs Piers will be transformed into a terrifying nightmare every weekend in October during Moreyâs FEARS Terror on the Boardwalk. Rides that were once welcoming and joyful will be twisted versions of their former selves. After youâve experienced the haunts of the boards, stop by the refreshment stands for some Halloween-inspired treats. Weekends through Oct. 27 at Moreyâs Pier, 3501 Boardwalk, Wildwood, (609) 522-3900, MoreysPiers.com, $25

Slam Dunk
If youâre anxious for basketball to start, you wonât have to wait any longer. Cheer on your Philadelphia 76ers when they host the Brooklyn Nets in the historic Sixers Boardwalk Classic. After a summer of trades, donât miss your chance to see some of the new faces to the team, facing off against our East Coast competition that always sparks a serious rivalry. Oct. 13, 7 p.m. at Boardwalk Hall, 2301 Boardwalk, Atlantic City, (609) 348-7000, BoardwalkHall.com, $10-$49

October Fun
Celebrate the season at the Shore with Sea Isle Cityâs annual Octoberfest. This free event features tons of autumnal activities for all ages, including face painting, live music, a magic performance and a hayride on the beach. The biggest event always turns out to be the Pie-Baking Contest, so submit your entry beforehand to win one of three top prizes. Oct. 20, 11 a.m.-3 p.m. at Excursion Park, JFK Blvd. and the Promenade, Sea Isle City, (609) 263-9090, SeaIsleCityNJ.us, free

Running with the Pumpkins
Celebrate the Halloween season while staying in shape at The Wildwoods Boardwalk Pumpkin Run. While both a 10K and 5K run are featured, this event is hardly just for serious athletes; a one-mile Family Fun Run is also offered. Everyone is encouraged to wear their Halloween costume and compete for prizes. Oct. 27, 8:30 a.m. at Wildwoods Convention Center, 4501 Boardwalk, Wildwood, (609) 729-9000, BoardwalkPumpkinRun.com, $25 for adults, $10 for kids under 18

Sinbad
Enjoy a hilarious evening with actor and comedian Sinbad when he returns to AC this month. Sinbadâs highly praised character and observational comedy has kept fans returning for more than two decades, with jokes fit for all ages. Oct. 20, at the Tropicana, 2831 Boardwalk, (800) 345-8767, Tropicana.net, $40-$65

Don Rickles
Comedian Don Rickles has certainly made a name for himself during his long career, and heâs bringing his insulting comedy to A.C. for one night. Rickles has been known to respond to hecklers, so try not to upset him too much; unless you can take the heat. Oct. 20, 8 p.m., at Trump Taj Mahal, 1000 Boardwalk at Virginia Ave., (609) 449-1000, Trump- Taj.com, $55-$75

Fiona Apple
Grammy Award-winning artist Fiona Apple will rock the house in A.C. with her fusion of jazz and alternative rock styles. Apple will have you grooving to songs from her new album, âThe Idler Wheelâ¦,â as well as some of her hits from years past. Oct. 20, 9 p.m., at the Circus Maximus Theater at Caesars, 2100 Pacific Ave., (609) 348-4411, CaesarsAC.com, $65-$105

Jerry Seinfeld
Legend Jerry Seinfeld returns to Atlantic City with his unique brand of observational humor. Seinfeld has earned a reputation for comedy from his brief stand-up shorts on his classic, self-named show, and hasnât stopped there, appearing across the country for decades, and always providing a laugh to guests. Oct. 20, 8 p.m., at the Borgata, 1 Borgata Way, (609) 317-1000, TheBorgata.com, $95-$155