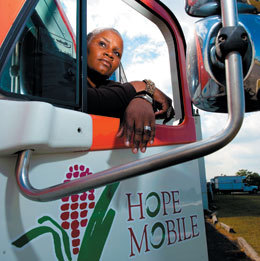 The Food Bank of South Jerseyâs planned expansion will be a shining moment; but thereâs still money to be raised.

The perpetual task of keeping the belly full: It is the first building block on the hierarchy of human needs, and it is taking some creative planning and calculated chances by the Food Bank of South Jersey to ensure residents in this region have a sturdy foundation for years to come.

The food bank has come a long way from its humble beginnings as a grassroots pantry. The nonprofit started 25 years ago in Camden within a space no bigger than your average two-car garage. Since then, it has distributed 100 million pounds of food to residents across the region.

But these days, serving Burlington, Camden, Gloucester, and Salem counties from a 45,000 square-foot facility in Pennsauken, the nonprofit has too often been placed in the difficult situation of having to turn food away due to a shortage of space.

However, that will soon change thanks to a major expansion projectâone that although already begun, has yet to be fully funded.

And thatâs where their calculated chances come in.

A growing need
Val Traore, FBSJ executive director, watched as ground was broke in April for a 20,000-square-foot addition to the food bank, added space thatâll increase safety and efficiency at the facility as well as food distribution capacity.

Though the $3 million needed for the project hasnât been completely raised yet (roughly $2 million remains), she is confident that itâll come through their capital campaign, donor support and unique self-sustainability initiatives.

Their latest venture into self-sustainability comes in a 16-oz. jar. The partnership forged around the product it contains, Just Peachy Salsa, is unlike anything the food bank has attempted before. But as they seek to collect the much-needed capital to complete the expansion this fall as scheduled, they have come to a point where groundbreaking ideas are emphatically rewarded.

Traore explains it was a bit serendipitous last year when one of her organizationâs outreach teams, typically tasked with soliciting donations from area farmers, stumbled upon Glassboroâs Summit City Farms.

Although little known to the average consumer, each year the orchard farmers usually have to toss out about 850,000 pounds of perfectly tasty but slightly bruised peaches that grocers wonât stock due to their less-than-flawless appearance. Not only has it been wasteful in a time of great want, but it has cost the farmers thousands in fees to dump the fruit in local landfills.

The food bank has, starting this year, taken those peaches to neighboring Campbell Soup Company in Camden to dice up and mix into a tangy treat. As part of its ongoing effort to support the community, Campbellâs has produced an estimated 54,000 jars of peach salsa that, if commercially successful, could be the next staple in a long line of homegrown New Jersey food products.

âThe bottom line is, this helps New Jersey farmers who have a hard time as it is keeping the family farm in operation, it reduces the amount of waste â¦ and it brings more fresh fruit into the community while producing a product that will help with fundraising,â says Traore. âYou talk about self-sustaining ways to operate; this is one way we can truly make an impact.â

Traore believes they could bring in about $100,000 from the salsa, which is available on location at the food bank headquarters and on their website at FoodBankSJ.org. Traore hopes to have it available in retail outlets such as Walmart and ShopRite soon.

Just Peachy Salsa and the complex partnership forged from it has created a public relations buzz that has garnered for the food bank some well-deserved attention as it seeks to raise the remaining $2 million for its expansion project.

âThis expansion is coming out of a sense of urgency on our part to be able to provide more food to those in need in South Jersey and offer more nutrition education to people, particularly children,â says Traore. âOur current size prohibits us from taking advantage of all the available perishable food or frozen products that we had to say ânoâ to and turn away.â

She adds, âTypically you raise the money first. But because we see this hunger every day, the numbers of people coming into our food pantry multiplying, we felt like we had to do this thing, like, yesterday.â

Community outreach
Traore estimates that up to 250 unique food pantries around the region are now reliant on the food bank to keep their own shelves stocked. It is the main hub through which the supply lines lead to all corners of its service area, from major population centers such as Willingboro to the rural Salem County communities along the Delaware River.

They have also dreamed up some creative ways in the past few years of bringing that food directly to those who are in the most dire straits. Throughout the month, the Hope Mobile, a tractor-trailer easily identifiable by its bright orange paint, trucks tons of food to families throughout the region. In some communities, the lines snake around buildings as hundreds wait for hours for a few bags of groceries. Harkening back to those iconic photographs of the Depression-era food lines, it is then that one realizes how much desperation still exists.

âSeeing hunger in the eyes of a child, seeing the elderly wasting away with nothing in their cabinets, those kinds of things touch everyoneâs hearts,â Traore says.

One of the food bankâs most successful campaigns has been bringing nutrition education into the classrooms. By helping children as young as 5 make better, more-informed food choices, they are setting a course for healthier lifestyles among some of the most economically disadvantaged communities. A popular offspring of this program has been the food bankâs courses for older siblings, who are being taught in this latchkey generation how to make meals for their brothers and sisters when the parents are not around.

The food bank continues to feed children throughout the year via programs such as its School Pantry, Kids CafÃ© and KidzPack, which provides a backpack full of food to poverty-stricken students that can last them through the weekend.

âWe are growing our partnerships with the schools, and we are told time and again if it werenât for the food we offer, these kids would be sitting in class hungry,â Traore says. Â­Â­Â­Â­ all the research shows us you canât learn as well when your stomach is growling.â

At this point, the food bank leaders are taking a hard look at their strategic plan in order to devise more ways to improve lives in a lasting, sustainable way. Traore says it will take collaborations with other organizations and frank, open-minded discussions as to where the needs still exist and how to conquer them.

But first they will continue their march forward on the distribution center expansion, seeking out donors and donations to fill their shelves. When completed, the Food Bank of South Jersey will be able to handle more fresh foods such as dairy, produce, meat and fish, keep meats frozen and fresh vegetables more crisp, while at the same time increasing their capacity to distribute food, Traore says. The current distribution center can hold up to 1 million pounds of food, a volume that will increase to 2.5 million when the building is finished.

In essence, they have a lot on their plate to make sure everyone else does, too.