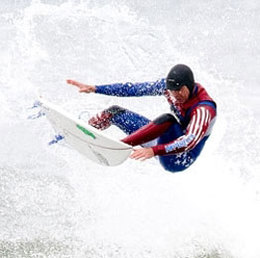 Coming from Somers Point to surf professionally in international competition was no small feat for Dean Randazzo, who left home while still a teenager to pursue the big waves of the West Coast. Still, even the roughest water was nothing compared to the diagnosis he received just five years into his career: Hodgkinâs disease, a rare form of cancer that took him off the beach and into intense chemotherapy treatment.

In 2001, the same year Randazzo was diagnosed, he formed the Dean Randazzo Cancer Foundation to raise money for the cause. We talked with Randazzo prior to one of the foundationâs biggest event, Surf for a Cause, now in its twelfth year this September.

How does a guy from South Jersey end up in the pro surfing world? New Jerseyâs certainly not famous for its big waves.
I think I was just incredibly driven, I knew what I wanted to do and I knew that I wanted to be the best. I moved to California to be on the scene after high school and took it from there and competed in amateur stuff, won a few of those. I started doing big US tours and I did okay but I never really excelled, not until I was competing internationally.

Why do you think you fell behind in US competition?
I wanted to be with the best surfers in the world, not just on the US level, and I didnât feel like I could be my best until I did that. I always felt I wasnât successful until I was competing on that level.

Where has surfing taken you internationally?
Iâve been to places like Iceland, and really Iâve been all over the world. My favorite place is Australia. The whole attitude about life is great. The waves are good and the beerâs good too, so that doesnât hurt.

How did fighting cancer compare to the beating a pro surfer can take?
I faced cancer like a competition. When I show up at the beach I assess everything around me- the conditions and the people and all that- and with cancer you do the same thing. I assessed my treatments and the hospital and the doctors to figure out what I had to do to survive. For me, I put the surfboard in my room and looked at it and said âIâm going to ride that board, compete again.â Plus I had my son, and when I had my family I had something bigger to live for.

Why did you choose the Jersey Shore as the home for the Dean Randazzo Cancer Foundation?
This [South Jersey] has always been what I considered my home. Even though I moved away itâs home to me. Iâve built up a name here as Iâm transitioning less into competitive surfing and more into my company and branding my name, opening my own shop in Gardnerâs Basin, selling my own line of boards and products, holding surf camp here.

How has it evolved since the foundationâs start?
Itâs accomplishing everything Iâve dreamed of: helping other people with their battle. To be able to accomplish that is what I hoped for. I just want to be able to help more people every year. If anything thatâs my next goal.

Have you accomplished your own personal goal: competing after cancer?
Right now Iâm just trying to grow my brand, Randazzo Industries, with surfboards, clothing, a surf school. Iâm working on a project in Ecuador, organizing a weeklong surf camp over there. But yeah, Iâm still competing in competitions and still working with my cancer foundation.

And you recently welcome a new baby into your family.
I have a lot on my plate right now. Iâm still adjusting to the new schedule: not a lot of sleeping.

What can people expect from the event this September?
We get a lot of the community to come out, and friends that may not be able to see each other since last yearâs event. Itâs more of an amateur contest. We usually do a pro heat, as a demo but itâs really focused on kids and family.

Can we expect to see you in the water?
Weâll just have to see.

The 12th Annual Surf for a cause will be held of Sept. 8 at Decatur Ave. Beach in Margate. Visit DeanRandazzoCancerFoundation.org for more information.