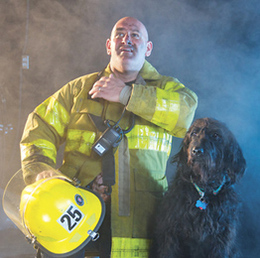 
by Editorial Staff--South Jersey Magazine
When Medford Lakes experienced flooding associated with 26 catastrophic dam failures in 2004, Steve Heicklen had an epiphany. âI realized Iâm pretty good at running this disaster stuff,â he says. Since then, Heicklen has volunteered around the globe, from post-Katrina New Orleans to earthquake-ravaged Haiti. And now, his relief work has made him a star of a new Imax-format documentary, Rescue 3D.

The volunteer firefighter, Medford Lakesâ emergency management director and owner of Jersey Pools and Spas, caught the eye of director Stephen Low when he âborrowedâ a rescue teamâs helicopter for an urgent mission in Haitiâwithout exactly getting permission first. Heâs one of four rescue workers highlighted in the film, which was funded by Boeing and features the companyâs rescue aircraft.

Despite being a business owner and father of four, Heicklen says embarking on rescue trips is never a tough decision. âWhen I go away for a greater good than what Iâm doing here at home, it makes it easy,â he adds.

Now that Rescue is set to premiere at the Smithsonian National Air and Space Museum in Washington, D.C., on June 8âand to play on big screens from St. Louis to Seoul throughout the yearâHeicklen is hoping to inspire others as well.

âThis really allows the message to be sent out to the public that not only does the military run huge relief missions,â he says, âbut that individuals also make a big difference by going out on their own.â Rescue-Film.com