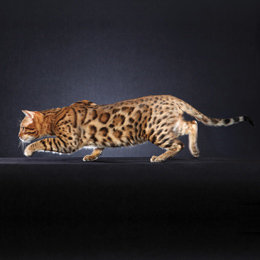 
by Jonathan Vit
Exotic and unusual animals are increasingly popular in some South Jersey circlesâbut owners donât always know what theyâre getting into.

You donât have to be a zoologist to recognize that thereâs something a little different about the dozen or so cats living in Peggy Angelastroâs South Jersey home. There are no tabbies or calicos here. Instead, Angelastroâs cats have spotted coats, like that of a leopard or a cheetah. One, named Goldar, looks downright feral.

Angelastro raises Bengal cats, a hybrid of a regular housecat and an Asian leopard cat. The mix combines the best characteristics of both breeds, Angelastro says. Her Bengal cats have beautiful coats, but lack the shy nature of Asian leopard cats. Theyâre intelligent, more like dogs than cats, she says, and they love to play.

âThey are just not the average cat,â Angelastro says. âThey are a lot like having a child. Usually a cat just sits in the corner and sleeps. Not a Bengal: they are very inquisitive. They want to know what everything is.â

When it comes to strange and exotic pets, Bengal catsâand other cat/wildcat hybridsâare just the beginning. New Jersey is a veritable Noahâs Ark of exotic pets, a state where residents canâand doâown ringtail lemurs, coatimundis, sugar gliders, wallabies and kinkajous. Unsure what a kinkajou is? Youâre not alone.

âA kinkajou is a rainforest mammal; they come from South America,â explains David Kupersmith, a veterinarian at Cherry Hillâs Animal & Bird Health Care Center and Hospital, South Jerseyâs go-to vet for exotic pets. Kupersmith and fellow veterinarian James Boutette have seen it all when it comes to exotic pets, the types of animals usually reserved for zoos. Kupersmith has answered phone calls from residents looking into buying a wallaby as a pet. (His advice? Donât.) Boutette had performed an ultrasound on a prized Koi fish the day before we spoke.

âWe are seeing animals most vets will not see,â Kupersmith saysâas such, he often has to improvise the animalsâ care.

But why, exactly, would someone want a jerboa or a degu (both exotic rodents, the former a hopping native of Northern Africa, the latter a short-tailed South American rat) as a pet? âPeople just want to have them,â Kupersmith says. âSometimes they fall in love with the animals, and sometimes they just want something other people donât have.â

But do they make good pets? âI am not going to tell people not to get them, but I am going to tell them, âDo your research first,ââ Kupersmith says. âGo into it with more than, âThis pet is really cute, I want [it].âââ

And keep in mind many of these pets are not really domesticated, Kupersmith says. Sugar gliders, trendy pocket-sized marsupials, often bite their owners. Wallabies have a nasty habit of boxing when they play. Other exotic pets can be skittish or nocturnal. âIf someone is going to be looking at any of these pets, a lot of them are not going to interact in the way we want them to,â Kupersmith says.

But some exotic pets can interact even better than cats and dogs. Kupersmith and Boutetteâs staff currently care for a 22-year-old blue and gold macaw named Courtney. On a recent Friday, Courtney danced a little shuffle on her perch, holding her wings out and moving her head to and fro. She often mimics the noises of a vet office, meowing and barking along with the cats and dogs that still make up 50 percent of the practiceâs business.

It helps that potential pet owners can apply for permits to own anything from a chinchilla to a python in New Jersey. Prairie dogs are off the table, but interested parties can buy a similar-looking Richardson ground squirrel.

Layda has the connections to get animals like sugar gliders, kinkajous and wallabies to interested pet owners in New Jersey. His Brick, N.J., store serves exotic pet owners from as close as South Jersey and as far away as Ohio. Sugar gliders are his hottest exotic pet right now.

âSugar gliders are a craze,â Layda says. âWe sell 20 to 30 a weekâwhatever I can get.â The wide-eyed marsupial looks like a hyper-cute cartoon squirrel. It has huge eyes, perky ears and a little round face. If raised properly, sugar gliders will ride around in an ownerâs pocket, clinging to the ownerâs clothes as they scurry around. âThey are actually quite cute and adorable,â Ladya says. âThey are really an awesome pet.â

But they require a great deal of specialized care, Ladya warns. Sugar gliders have a very specific diet. Owners have to blend fruit, eggs and vegetables into a juice. If sugar gliders donât get enough calcium, they have seizures. âThis isnât a pet for kids,â Ladya says. âIf a customer wants to buy it for a 5- or 6- year-old, then we are not going to sell it, because the animal is not going to have a good life and it is going to die.â

An animalâs natural environment is the most important factor in whether it can be comfortable as a pet, experts say. Reptiles need heated tanks and some, like iguanas and African tortoises, can grow to be massive. All too often, pet owners buy an animal when it is small and manageable, only to find themselves in way over their heads in a couple yearsâ time.

âAlligators are one species in the pet trade that I wouldnât recommend as a pet for anyone,â Rothacker says. âThey are best enjoyed in the wild.â

Rothackerâs reptile refuge often takes in animals from South Jersey. He once drove to Cherry Hill to pick up a six-foot Australian carpet python after its owner lost interest in keeping the pet. âIt was just a story of a kid who left home and lost interest in the snake,â Rothacker says. âHe told his mom, âWhy donât you just let it go in the woods?â

Here is a mom who was terrified of snakes, but she knew that it would be wrong to let it go in the woods of New Jersey.â

Another time, the refuge took in a massive African sulcatta tortoise from Atlantic City. A casino worker found a kid trying to trade the reptileâthe third-largest tortoise species in the worldâfor a six-pack of beer, says Rothacker. The casino worker bought it for $5 and drove it out to Forgotten Friends.

âIn this case, the kid said he was just feeding it dog food,â Rothacker says, âand here is something youâre not even supposed to do. They are strict herbivores.â

At full maturity, the tortoise could grow to reach 200 pounds. And African sulcatta tortoises can live for 50 years.

âIt is strictly an impulse buy,â Rothacker says. âThere is no denying they are sort of magnificent and mysterious creatures, [but] if they would tell you up front, âOh that tortoise you bought it probably is going to outlive you and is going to need to be in your will,â they probably wouldnât buy them.â