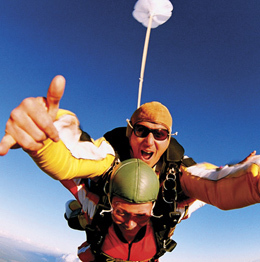 
by Editorial Staff--South Jersey Magazine
The 20 things every local should experience at least once (in no particular order).

If you want to catch some serious air, Freefall Adventures in Williamstown takes you higher than most at 14,000 feet. For those making their first leap, rest assured that the largest skydiving school in the northeast will make your experience a memorable (and safe) one.

2. Cheer on the Riversharks

With Phillies tickets so hard to come by, itâs time to rediscover our own local nine, the Camden Riversharks.

A preferred way to explore the Pine Barrens.

What better place than the self-proclaimed Blueberry Capital of the World?

The oldest weekly rodeo in the country, located in Pilesgrove, brings a bit of the Old West to South Jersey on summer Saturday nights.

In 1793, the first manned hot air balloon landed in Deptford after traveling 15 miles from Philadelphia. In 2011, you can travel the same skies thanks to local companies that are floating their own modern-day offerings.

7. Bike the City to Shore

Raising money to fight multiple sclerosis is a worthy cause on its own. Riding your bike from Philly to the Ocean City Boardwalk in this annual race just adds to the journey.

When David Crosby called it the âcoolestâ place heâs ever played, those who didnât already know took notice. Top-flight acts and an intimate setting make for one great show.

9. Spend the Night in Venice

Each summer, a tiny piece of Italy comes to Ocean City via this highly popular boat parade. Hundreds of illuminated and thematically decorated vessels make their way along the bay to the delight of thousands of spectators. Get there early if you want a good spot, because this is far and away the most in-demand event of the season at the Jersey Shore.

The legendary poet spent his formative years in Camden. Here, you can see his words come to life.

These landmarks along the coast are just as much part of the Jersey Shoreâs allure as the Victorian homes of Cape May or Atlantic Cityâs Boardwalk.

Since 1970, the Flying W Airport in Medford has been offering flight lessons for aspiring aviators from across the region. The Aero Prep program is FAA certified and gives you firsthand, interactive experience with trained pilots who will give you the tools necessary to roam above the clouds.

13. Go to the Cohanzick Zoo

The Bridgeton zoo was New Jerseyâs first and houses more than 200 animals from across the globe.

Built in Philadelphia and launched just a year after Pearl Harbor, the battleship returned home and became a memorial museum in 2001.

15. Watch the Flyers practice at the Skate Zone

Thereâs no denying the love affair South Jersey has with the Orange and Black. With so many players, past and present, living in our area, they arenât just our hockey teamâthey are our neighbors. You would think watching a practice session wouldnât be that exciting. Well, donât tell that to the scores of fans donning their sweaters in the bleachers at the Skate Zone. Not only are practices free, but thereâs a designated spot in the parking lot where eager fans can wait for autographs.

Whether on a guided tour with the Pinelands Preservation Alliance or at your own risk, trying to track down this infamous beast in the Pinelands is truly an area pastime. The legend and folklore surrounding the Jersey Devil attracts curious visitors that come year round looking for a chance encounter with the (mythical?) beast.

17. Play a round at Pine Valley

Tiger Woods has a standing invitation. For the rest of us, though, the chance to tee off at one of the worldâs most exclusive golf courses remains one of South Jerseyâs more unattainable experiences.

Haddonfield is one of more than 200 places around the United States that host this annual New Yearâs Eve bash. And theyâre known for throwing quite a party. Young and old alike flock to the area to enjoy a mix of live music and entertainment and plenty of family-friendly activities. (The event is alcohol-free.) An early fireworks display caps off the festivities, but the real celebration is the sense of community that is formed as revelers from near and far fill the streets.

19. Swim with the sharks

Camdenâs Adventure Aquarium has lots of impressive exhibits, but one of its more unique offerings is an up-close-and-personal encounter with sharks. For $175, and after a training session, daring guests are able to snorkel their way to an unobstructed view of the aquariumâs sand tiger and nurse sharks. The experience concludes with a visit to the adjacent lagoon, home to the stingrays. Unlike the shark portion of the journeyâand for good reasonâhere you are able to hand-feed the fish.

20. Explore the Grounds For Sculpture

This 35-acre museum and public park features works by some of the worldâs most renowned sculptors and is one of the more unique experiences in the area. The immaculate grounds serve as the canvas for these contemporary works of art. Complete your visit with a meal at Ratâs Restaurant, also located on the premises.