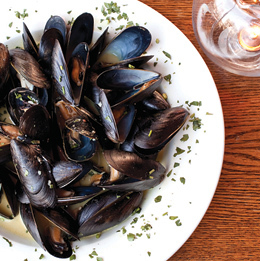 
by Peter Proko
5 spot: Shell Game
South Jersey diners in search of mussels used to have only one decision to make: tomato-based or white-wine stock. These days, there are plenty more sophisticated options making their way out of area kitchens. With inventive offerings like these, youâll have no problem breaking away from tradition. Well, for the most partâyouâll still need that bread for dipping purposes.

2. El Sitio. Mussels in Peruvian Pisco and White Wine Sauce. In a nod to their South American roots, the folks at El Sitio use a brandy-like, grape-based liquor to give this dish a lift. 729 Haddon Ave., Collingswood, (856) 240-1217

4. Andreottiâs Viennese CafÃ©. Prince Edward Island Mussels. The addition of fresh fennel and chopped tomatoes helps add flavor to this appetizer, but the unexpected star of the show is the mascarpone cheese. 1142 Route 70, Cherry Hill, (856) 795-2233

âAs of late, Iâve been going to see one of my former employees, George, at his new location, Tinoâs Deli in Wenonah. He has the best muffuletta around!â
âChef Jim Malaby of Blueplate in Mullica Hill

Brunch Bites
Thereâs plenty of French toast to go around during Sunday brunch at Due Amici in Cinnaminson, but youâll want to try items like the chicken and broccoli crepes and seafood involtini. At $9.99 including an entree and the buffet, the menu available from 10 a.m. to 2 p.m. is one of the better values in the area.

â¢ Sick of the gourmet hamburger trend? Well, get ready for gourmet hot dogs. Cherry Hill will soon welcome Cool Dog CafÃ© along Route 70, a new venture from two locals. The menu will feature exotic ways to dress your dog (think Thai peanut sauce). They will also be serving up sliders in varieties ranging from pulled pork to brie with caramelized onions and raspberry sauce. The menu includes vegetarian options and Belgian frites.

â¢ Atlantic City hideaway Chef Volaâs has long been recognized by those in the know as one of South Jerseyâs finest restaurants. Well, now the folks at the James Beard Foundation have taken notice, too, honoring Volaâs with the Americaâs Classics award.

â¢ Rajbhog, the casual Indian eatery on Greentree Road has maximized its space by turning half of the location into Chillie N Spice, an Asian-Indian grocery store selling exotic spices, rice, flours, grains and more. Prepared meals and other specialties will fill the shelves.

â¢ Keep an eye out in Collingswood for an exciting new neighbor coming to town. Joey Baldino has worked in some of the most respected kitchens in Philadelphia alongside culinary master Marc Vetri, and now he is branching out on his own with a small Italian establishment on Collings Avenue at the former home of IndeBlue.

Breakfast: Chocolate hazelnut dream waffle from The Bistro at Haddonfield. What beats starting the day than with a Belgian waffle? Try topping it with Nutella, sliced bananas and graham cracker crumbs.

Appetizer: Stuffed mushroom at Lillianâs CafÃ© in Audubon. Sauteed mushrooms topped with spinach, roasted red pepper, onion, Parmesan cheese and crabmeat are nestled in the cap of a portabella before being finished with a brandy cream sauce.

EntrÃ©e: Spiedini di vitello from Sapori in Collingswood. Grass-fed veal gets the sweet and salty treatment. After being rolled with pine nuts, raisins, breadcrumbs, pancetta, onion and cheese, itâs placed on a skewer, grilled and finished with a lemon olive oil and almond butter sauce.

Dessert: Amaretto cheesecake from Antoniettaâs in Runnemede. You can taste the authenticity in each bite of this homemade treat.