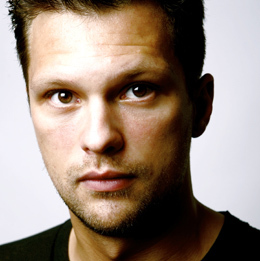 Moorestown native Julian McCullough is one of the most sought-after young stand-up comedians performing today. A first-place finisher at the 2008 New York City Comedy Festival, McCullough has been a fixture everywhere from area stages to Comedy Central in recent years. With a couple of TV pilots in the works and a heavy rotation on the stand-up circuit, we’re expecting big things from this hometown guy. We caught up with him to find out about growing up in South Jersey and what makes him laugh.

SOUTH JERSEY MAGAZINE: So you grew up in Moorestown. Any fond memories of South Jersey?
JULIAN MCCULLOUGH: The Golden Dawn Diner on Route 38 in Maple Shade. My dad and I used to eat there five nights a week while I was in high school. They didn’t even wait for us to order: they just brought out our food when they saw us sit down. One time, we watched a guy order an entire Key lime pie and eat the whole thing right out of the pie case. He didn’t appear to be celebrating anything.

SJM: Moorestown was once named the greatest place to live in America. How could you leave that behind?
JM: I saw that article! There are definitely parts of Moorestown that resemble the American dream in all its glory. Unfortunately, 1.) It lacked a comedy scene of any kind, and 2.) The best job I ever had there was at the Cubby Hole on Main Street, making $7 an hour, spilling coffee on rich people. It would have been difficult to get a five-bedroom, five-bath Revival on Oak Street with that kind of income.

SJM: Were you doing much comedy during your time here?
JM: Not unless you count making my friends laugh in Colin Del Rossi’s basement or driving Ms. Trapani crazy in Spanish class. She actually had another kid keep track of how many times I said smartass comments in class, and kept me after school a minute for each one.

SJM: Do you remember the first joke that you had that killed, or a moment when it just clicked that you would become a comedian?
JM: The first decent joke I wrote was about a woman asking me what I could possibly bring to the table in a relationship. And I said, “You’re probably gonna have to bring that table.”

SJM: Stand-up comedy can be a rough business, especially for young comedians. What’s the worst gig you’ve had to date?
JM: I once did a fund-raiser for a Pop Warner league in Central Jersey. The guy who hired me gave me a bunch of personal dirt on a lot of the parents … who was an alcoholic, who cheated on their husband, etc. I was doing comedy for about two years and was this young kid no one knew, who basically ruined an entire fundraiser by airing out a bunch of dirty laundry. It wasn’t my fault, but I had to run out of there.

SJM: What’s the toughest part about comedy that most people don’t understand?
JM: Other than the financial insecurity of not knowing where your next paycheck is coming from, developing new material is very difficult. It takes a lot of tries on each joke before you get it where you feel like it’s done. The failure is public and constant if you want to stay fresh and good. A lot of guys give up on writing new material because they are too lazy or afraid to fail after they write enough jokes.

SJM: Your job is making people laugh. What makes you laugh?
JM: Very little stand-up can still make me laugh, but I enjoy most other forms of comedy that regular people enjoy. Dogs that act like people, stuff like that.

SJM: You have been open about quitting drinking. How long have you been sober and how has it made you a better comedian?
JM: I don’t like to use the word sober for a couple reasons, but I haven’t had a drink since March 16, 2009. Two years. It’s made me better at the business side of my career, and it’s made my stand-up more personal, since I actually know myself now. When you’re drunk all the time, you have no idea who you really are.

SJM: Where can we see you next?
JM: I warm up the audience every day at the Colbert Report, which has been a steady paycheck and an all-around awesome job. I also perform every night in NYC at the Comedy Cellar and other places. I just shot a pilot for a new talk show with Whitney Cummings for E! that would air after Chelsea Lately. I have a scripted narrative pilot in development with Sean O’Connor at MTV, and I will be a part of the Bonnaroo Comedy Tour in May. Also, if anybody reads this article and wants to do my website for cheap, e-mail me!