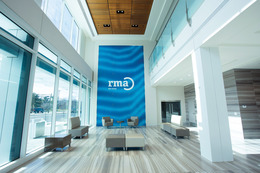 Expecting the Best
For anyone vetting providers to help overcome infertility, experts from RMA New Jersey underscore the importance of safety, success rates and a high standard of care.Â Â

\A constellation of stars has to align in order for a human life to be brought into the world. When critical aspects of the reproduction process are out of alignment, people often become frustrated, desperate and doubtful that their dream of starting or adding to their families will come to fruition.

“Let’s meet with a fertility doctor,” one partner may say to another, and the flicker of hope helps to chase away the darkness. Jason M. Franasiak, M.D., FACOG, HCLD/ALD, a reproductive endocrinologist with RMA New Jersey, suggests seeking out someone with his expertise if a woman cannot get pregnant after one year of trying, or six months if she is over the age of 35. He offers a word of caution, however: Choose wisely, because not all practitioners of reproductive medicine are created equal.

“Safety should always be the No. 1 priority, and for us safety begins with transferring a single embryo at a time,” says Dr. Franasiak, who serves as the lead physician and laboratory director at RMA Marlton in South Jersey. “Although single embryo transfer should be the standard of care everywhere, that’s not always the case. The end goal is a live birth, but getting there should not come at the expense of unnecessary risk.”

At RMA New Jersey, advances such as extended embryo culture, blastocyst biopsy and frozen embryo transfer, among others, are common practice. As a result, RMA New Jersey has exceeded key national benchmarks for more than 10 years.

The most recently published data from the Society for Assisted Reproductive Technology (SART) show that RMA New Jersey’s mean number of embryos transferred was 1.0 for patients 35 and younger, compared with the SART national average of 1.2. Its reported results for patients in other age groups significantly outpaced the average, underscoring its commitment to patient safety and success: 1.0 for ages 35 to 37 (national average of 1.2), 1.0 for ages 38 to 40 (1.4), 1.0 for ages 41 to 42 (1.6), and 1.1 for ages 42 and older (2.0).

Likewise, 83.3% of RMA Jersey’s new patients ages 35 and under experienced a live birth, compared with the national average of 68.6%. RMA New Jersey reported similarly superior results for all other age groups.

“We can achieve these rates because we hold ourselves to high standards of care,” says Dr.  Franasiak. He adds, “Those standards are important because they show our commitment to two things: patient safety and patient success. Everything we do is geared toward those two aims.”

We spoke with Dr. Franasiak about what families can learn from reported success rates, the role of genetic screening and other advanced tools, and additional factors to consider when vetting prospective providers who specialize in reproductive medicine.

RMA New Jersey has consistently reported its success rates to SART and the U.S. Centers for Disease Control and Prevention, and the data show that RMA New Jersey’s percentage of live births and the number of embryos transferred are above the national average. Why should patients consider these success rates important?

First, let’s talk about why these numbers are reported. In the medical field, it’s rare that physicians or providers are required to report their success rates. Reproductive medicine is an exception. It goes all the way back to some of the initial concerns the U.S. government had about assisted human reproduction, so it has become more of a regulated field of medicine. These days, 1 to 2% of all children in the United States are born via in vitro fertilization. Savvy patients who have been through the process before may know to consult these resources before choosing a provider, but not all patients do.

Reproduction is a notoriously inefficient process, and fertility treatment has been no exception to that. To overcome that inefficiency, some facilities end up transferring multiple embryos. One of the most common side effects of that practice is multiple pregnancies. You see stories like “Octomom” and instances of true medical malpractice, where you can’t quite understand what people were thinking. While those kinds of instances are rare, you still see cases of multiple embryos being transferred across all age groups, and those numbers increase as a woman’s age increases. The most recent SART data show that the number on average can be as many as two, depending on the age group. Again, one of the downsides of that is multiple births. With triplets and more, you often see poor outcomes for mom and baby. Unwanted outcomes can happen with twins, too—a higher risk of a caesarian section delivery, premature birth, having to spend time in the NICU, and other developmental issues.

We have standards in place to prevent these kinds of outcomes. One of them is genetic testing. We discuss genetic screening with all patients as a way to determine if embryos are normal or not. As the age of the eggs increases, the more prevalent abnormal embryos become. Also, with frozen embryo transfers, we can line up the windows of receptivity of the uterus and ability to implant for the embryo. The result of what we have learned over the last couple of years is that we can maintain our success rates above the national average while transferring a single embryo at a time. If you look at the most recent data, once again we’re above the national average in terms of live births per patient with a lower number of embryos transferred across all age groups.

When genetic screening is indicated, RMA routinely performs what’s known as a trophectoderm embryo biopsy. What does this biopsy tell you and, in the end, how does it benefit patients?

The reproduction process doesn’t always go smoothly; there’s a tendency to sometimes throw out or keep too many chromosomes when eggs and sperm go from a whole set of DNA to a half to combine and create a new child, and that ultimately leads to an embryo that is genetically imbalanced. A biopsy can determine that. If an embryo is genetically abnormal and unknowingly transferred, the most common outcome is no pregnancy, and the second is one that results in a miscarriage. It can also result in ongoing pregnancy.

You’ve also talked about synchronization that must occur during the time of embryo transfer. For those who aren’t familiar with the biology, describe the process and the role it plays in fertility.

There’s something known as embryo and endometrial synchrony. The embryo develops along a certain timeline so it’s ready to be implanted in the uterus. There’s also an endometrial window of receptivity, in which the uterine lining can receive the embryo; that develops along a timeline, too. Those two windows need to align with one another. If we do a frozen embryo transfer, we can prepare the uterus with estrogen and progesterone hormone treatment to make sure the two are compatible, to increase the likelihood of the transfer resulting in a pregnancy and, later, a live birth.

We’ve talked about statistics and procedures, but there’s also a significant human factor associated with infertility and the methods to overcome it. Tell me about the providers at RMA New Jersey, and why their expertise and passion for reproductive medicine is important.

RMA has a long history of being at the forefront of this field, including conducting cutting-edge research that is helping to move the entire field forward. RMA physicians continue to participate in these groundbreaking studies, including some here at Marlton. We’re looking into topics such as how we treat endometrial insufficiency, or thin uterine linings, looking at platelet-rich plasma as a potential treatment. We also continue to look for ways to expand and enhance genetic screening and testing. Genetics has been intertwined with human reproduction, and now we’re looking past the genetics of the embryo to delve more deeply into the parents themselves.

As for me, women’s health care has been in my blood from the time I was a child. My dad was an OB/GYN, and my mom was a labor-and-delivery nurse, so I was around it from when I was quite young. I followed my father into OB/GYN and had the opportunity to be involved in reproductive medicine. I like being a part of a couple’s or a patient’s lives; helping them build their family is a remarkable honor. I am also very engaged in the science of human reproduction, which is entirely fascinating. All of the practitioners here have their own story and their own reason for getting into this field, but I think we all share that interest in the science and that passion for helping other people.

Since we opened our doors in Marlton three years ago, we have continually expanded our services and added to our staff. Recently we announced two new practitioners that have joined our team: Michael Simone, M.D., a reproductive endocrinologist; and Jessica M. Kestler, MSN, APN, WHNP-BC, a nurse practitioner. That means we have a total of

four providers here to help us achieve the goal we set out to achieve when we opened this facility, which is to help locally based patients safely build their families.