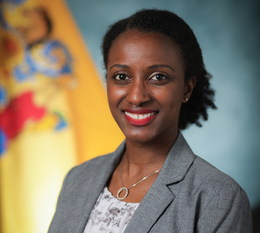 A Growing Presence
Cannabis Regulatory Commission Chairwoman Dianna Houenou on the stateâs recreational marijuana marketplace and what lies ahead.

Since residents overwhelmingly voted to legalize adult-use cannabis at the state level in November 2020, it’s been a whirlwind two years for the New Jersey Cannabis Regulatory Commission (CRC), the government agency established to regulate the industry in 2019, when only the medicinal side was up and running.

Dianna Houenou was appointed to chair the CRC in 2021, bringing a range of government and equity-initiative experience to her leadership role in ensuring New Jersey’s cannabis industry is heading in the right direction and remains focused on social justice. Her previous work includes being policy counsel with the American Civil Liberties Union of New Jersey, where she advocated for reform in the state’s cannabis legalization, before serving as an advisor and counsel to Gov. Phil Murphy.

Between CRC meetings and facilitating direct conversations with New Jersey’s municipal officials, Houenou set aside some time in her busy schedule to chat with South Jersey Magazine about South Jersey’s place in the cannabis industry, the CRC’s current priorities and why she’s excited for the future.

SJM: With Bordentown’s Curaleaf location recently becoming the 20th adult-use dispensary, is that indicative of how that market is thriving?

DH: We’re seeing a lot of good movement happening. With every public board meeting, we are considering and approving tons of licenses, tons of applications for cannabis business licenses. We are now up to over 800 conditional licenses that have been awarded, and 18 annual licenses that were awarded to newly created businesses that want to get into the industry.

We’re making great progress in expanding the adult-use market, but it’s not just the current medicinal operators that are providing personal-use cannabis: Our new businesses are seeing the light at the end of the tunnel, too. There’s a lot of room for the market to grow, there are lots of business opportunities, including for ancillary businesses—businesses that are not plant-touching but still support these cannabis businesses, since every cannabis business is going to need its own cleaning services, marketing, legal services and even photography.

SJM: It seems like you’re finally getting over the initial hurdle of processing the sheer volume of applicants who want to get involved in a new industry, including ensuring that historically marginalized individuals will benefit from it.

DH: Exactly. We at the [CRC] have put in place a lot of policies and practices to try to center our work on equity. It’s one of our core tenants, and I like to say we mean it so much that we put it in our logo. The application review process prioritizes applications from [groups like] women, disabled veterans, minority-owned businesses, applicants who have had prior convictions for marijuana-related offenses, applicants who live in an economically disadvantaged area. We have among the lowest application fees in the country: All it takes to submit your application to the CRC is as little as $100, once we get your initial application in. As we lower the barriers to having a shot here, that’s really where we see equity opening up the doors for people who are interested in joining the regulated market.

SJM: Are representatives from other states reaching out to the CRC for some insight into its experience and how the regulatory process has been going?

DH: Absolutely! We have folks at the CRC who are in regular communication with regulators from across the country, who are very open in sharing our experiences, and also getting insight from others when we encounter an issue that maybe we haven’t thought about before and we want to see how another state has dealt with it. And—just a shameless plug for our communications team—I’ve even gotten praise from other regulators about our website and our YouTube presence. We really are trying to do things differently when it comes to government outreach and getting people to understand that we, in this government agency, really do want you to be a part of our process. I think New Jersey has been a strong leader in providing and demonstrating how we can do that.

SJM: In the two years since residents voted to legalize recreational use, have there been any pushback or common misconceptions indicating where there’s still a need for education?

DH: I think the initial resistance to legalization broadly has waned. Of course, some towns and some individuals are still philosophically opposed to legalization, and that’s OK.

Now when we talk about how we stand up this industry and expand the industry, now that it is formally stood up, I think we [need] a bit more concerted effort around educating our applicants so that they understand what they need to provide when submitting an application. For instance, we send a lot of letters to applicants asking them to resolve any deficiencies in their applications, which I think is really a result of the eagerness to be a part of this historical movement, as opposed to carelessness.

SJM: To the point of any initial resistance legalization was met with, is the financial benefit of a municipality allowing dispensary operations changing some people’s minds?

DH: I think it is, honestly. And there are towns that wanted to wait and see how the other municipalities fared through this initial wave before [they] decided to join the regulated industry—those towns that opted out with an asterisk, that are continuing to engage in conversation with us and with other municipalities to see what the experience is like because they are open to revisiting their ordinances and opting in. The CRC is creating lots of spaces where we are talking to municipal officials directly about our regulations, about what they can expect and about where they should focus their efforts and resources.

SJM: Can you tell me a little bit about South Jersey’s presence in the marketplace and how it’s developing?

DH: It has a really strong presence, both in the medicinal industry and now the adult-use industry. South Jersey has a lot of applicants that are interested in operating there—and operating a variety of cannabis businesses. It’s not just growth facilities, but dispensaries and manufacturing facilities are looking to set up in South Jersey. I think there is a lot of interest in exploring business ownership in towns that might not be super densely populated or super dense areas, and we see those municipalities in South Jersey that are welcoming cannabis businesses with open arms.

SJM: What is the overall state of New Jersey’s cannabis market and how has it grown?

DH: We have seen New Jersey’s cannabis market go from zero operators selling recreational cannabis to now 20 operators offering medicinal and recreational cannabis, and we’ve got another 18 new businesses that are now on the path to setting up their own shop. I am really encouraged by what we’ve been able to achieve thus far and I’m very optimistic about the growth that New Jersey’s cannabis industry will see in the coming year.

SJM: So what is on the horizon for the CRC itself?

DH: In August, we had proposed regulations that were published in the New Jersey Register. Now that the 60-day comment period has closed for those new regulations, we are digesting all of the public comments, considering what changes make sense in response to the comments, and we’ll be doing a final rule adoption where we’re finally adopting regulations on new classes of licenses for wholesales, distributors and delivery services. That’s a big priority for us in the coming months.

We’ll also be looking to update our medicinal cannabis regulations: We want those to be on par with the adult-use regulations, where there may be some space or discrepancies between the two.

Arguably one of the more exciting priorities is the implementation of a couple of programs that were recently announced. The CRC is working with the Business Action Center to develop a technical assistance program; the Business Action Center expects that program to launch next year, it’ll be free for folks, which is fantastic. And we’ve been working with the Economic Development Authority in developing an access-to-capital program, making funds available for prospective cannabis entrepreneurs so that they can actually feel confident that they have the resources needed to set up a business.

SJM: Where do you see the industry in five years?

DH: I hope to see New Jersey’s industry become as diverse as the state. We are well-positioned to have a cannabis industry that’s rich in its diversity, in terms of racial and ethnic makeup of the business owners, the workforce, and the size and locations of our businesses. New Jersey can really make its mark on the national cannabis scene by being a leader when it comes to doing equity work in the cannabis space. I think we’ve done fantastic work in demonstrating our commitment to equity and actually doing everything with equity in mind. I think we can continue on that path and be a leader for government agencies that want to be a little bit more intentional.

SJM: How do you feel about the direction of New Jersey’s cannabis industry?

DH: Excited! We know that there’s a lot of interest in local, New Jersey-based businesses and we’re going to start to see that coming to fruition. There’s a lot of work we’ve done in the last year and a half and we still have a lot more to do, but it’s exciting work to build a brand-new market that is truly accessible and open to anybody who wants to participate in it. n