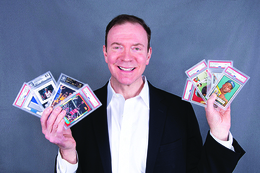 You may have heard that the sports trading card world is back in a big way and everyone from first-time collectors to those intrigued by the nostalgia of it all are on board and paying top dollar for the rarest of finds. But before you go rushing into your basement to uncover all those cards you think are worth a mint, Haddonfield’s Ken Goldin would like you to know that they are indeed not.

“Literally, you can take every trading card from 1981 to 1994 and probably name 10 cards that have any value. The rest of them never have and possibly never will appreciate significantly because there were so many made” during what is referred to as the junk-wax era,” Goldin says.

And Goldin should know, he’s been buying and selling card collections since he was 12 years old and is the founder and executive chairman of Goldin, a global auction marketplace where some of sports and entertainment’s biggest pieces of history are sold for astronomical figures. Goldin himself has sold more than $1.3 billion in memorabilia, including once fetching $3.9 million for an ultra-rare Mike Trout rookie card.

With the “hobby” bigger than ever, the company has grown tremendously over the past few years. Big names like Kevin Durant, Mark Cuban and Mark Wahlberg are investing in the industry’s future and Goldin received $40 million in funding in 2021 before being acquired by Collectors Holdings—a company helmed by New York Mets owner Steve Cohen among others.

Despite this meteoric rise and worldwide presence, Goldin remains headquartered in a Runnemede business park, where it just leased its third building to keep up with the growing operation. “I ended 2020 with 17 employees and I have over 100 now,” Goldin says.

Back in 1986, when he and his father started The Score Card, a sports memorabilia company in Cherry Hill, Goldin says he never would have imagined things would have exploded the way they have. “What we thought was incredible back then, was really a fraction of today’s market,” he says.

Now Goldin counts some of the sports and entertainment world’s biggest stars as close friends. One day he may be with a hall of fame athlete picking over their personal items for sale or maybe helping Drake seek out something for his own collection. And soon, the world will get a behind-the-scenes glimpse of his life thanks to a new Netflix reality series chronicling his quest for the ultimate prized possessions.

We spoke with Goldin about all the excitement surrounding the marketplace, how his company has expanded beyond sports and found out why he doesn’t ever see the bubble bursting.

There’s been a lot of buzz around Goldin over the past couple years with the acquisition of the company and your continued growth. What has the past few years been like for you personally?

I did not envision this when I started. My goal—there was a giant company called Heritage and their sports division was run by their parent company that did about $1 billion a year in sales. They were the giant and I figured if I could one day build up to second place that would be tremendous. And I blew them away.

Sports memorabilia and trading cards are big draws, so what led to expanding into other areas like the video games and other non-sports items?

To me it was natural to extend to other collectibles that have similarities to sports collectibles. For example, comic books and graded video games; they’re nostalgic, they are typically male-dominated collectibles and they are independently graded by third parties. It just lends itself to the same collector and we were looking to expand.

Why do you think the lid blew off the trading card world and it has gotten to the point where it’s like investing in a stock or buying a piece of fine art?

The change in the marketplace really occurred in the late 1990s with the advent and adoption of third-party grading. What happened is people would say their card is “very good” or “excellent” or say it’s in “mint condition.” But one person’s “excellent” may be someone else’s “fair,” and you also had counterfeits to worry about. A company like PSA came along and they provided two services, they authenticated the cards and graded them on a scale of 1-10, which to me turned it into an investible asset.

Somebody can buy and sell trading cards based solely on the grade and the serial number, in theory without ever seeing the cards. And now without ever touching the cards. It truly became more of a marketplace as opposed to a bunch of collectors at a card show every weekend.

Goldin routinely sets records with various auction items, so has there been any intriguing or surprising things you’ve seen recently?

I personally love it when I am dealing directly with an athlete and they are giving me something from their personal collection to sell, whether it’s a jersey they wore in the Super Bowl or a Most Valuable Player trophy or a game-used bat to hit a specific home run. Rare artifacts and documents are always unique. But it’s all historic, anytime I look at a 1909 T206 Honus Wagner card I feel like I am holding the Mona Lisa of the hobby in my hand.

I am definitely more desensitized than most people to this type of stuff, but the great items still impress me and I get excited by the chase.

Is there much of a difference in terms of popularity these days between the vintage and more modern items?

The modern collector is typically into their items for a shorter period of time than the vintage collector. They are typically a younger collector and more of an investor and the type of person that would maybe trade in stocks. It’s just a younger, faster pace.

The vintage cards, the key ones, are the bluest of the blue chips of the industry. They are maybe slower moving, but you are dealing with true rarity. Back in the day people did not save trading cards as a collectible. So they did not keep them in perfect condition and most of them were thrown away or destroyed. That created a natural scarcity, and especially on the upper echelon of all cards.

Tell me a little bit about the Netflix show. How did it come about and what can viewers expect?

The show has mostly completed filming, we are in post-production and hopeful it can launch in the fall. I think it is going to be a monster hit.

It’s so unique because it really gives insight to not only the people involved, but also if you look at everything Goldin goes through, such a historic group of collectibles and people we deal with, it will take everyone through how that happens. Whether someone finds something in their attic from their great grandparents and they come to me and find out it’s worth $2 million and it was just sitting there. Or someone buys a pack of cards for $5 and pull out a card that I sell for $500,000 and it changes their life.

Despite building this successful business and reaching this point in your career, do you ever reflect on the fact that this passion started when you were a young boy?

All the time. The funny thing is people ask me, “Did your dad get you into cards?” I say, “No, I got my dad into cards.” When I was 15 he got tired of driving me around to buy collections so he said, “OK, Ken we are now splitting every deal.” I literally had my father as a partner until he passed in 1994. So when I see some of these great collections that come through the building, I flash back to the day when I was doing this with my dad and think he would be in shock that I am sitting here with three T206 Honus Wagner cards in my hands.

In all seriousness, when I was 16 years old my mother told me that I could not earn a living selling baseball cards and that I needed to get a real summer job and I needed to learn what’s it like working for somebody else. I went to the Cherry Hill Mall and worked at York’s Steak House for about 30 days as a food prep and bus boy. That is literally the only time in my entire life I earned a time outside of collectibles and worked for anyone else in my life.

I’m sure you get asked this often, but will that bubble burst anytime soon? Can this be sustained?

I can show you articles from the 1980s where people are using the word “bubble” with sports cards, and the prices they were talking about then were $1,500 for a 1952 Topps Mickey Mantle.

I don’t believe in a bubble. I believe in peaks and valleys. Every market has bull times and bear times, but if you go back five years, 10 years, 20 years, 50 years, and you take a trend line of the most popular and collected cards over that period of time it looks like a chart that the highest-quality S&P 500 company would be envious of.