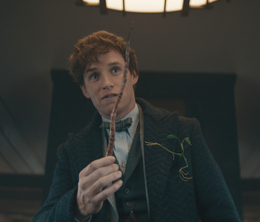 Eddie Redmayne made a big impression in 2016, when he first stepped into the role of wizard and “Magizoologist” Newt Scamander for the hugely popular Fantastic Beasts film series. His on-screen work may have been a bit too spectacular for at least one diminutive group.

Redmayne’s two young children—6-year-old Iris and 4-year-old Luke—recently asked him to show off some of his Fantastic Beasts wizardry. Instead of magical fireworks, he produced a simple trick involving a coin, prompting his son to say, “But that’s not the stuff you do in the trailer.”

Redmayne’s acting has earned him a lot of hardware: an Academy Award, a Tony Award, a British Film Award, and two Laurence Olivier Awards. Noteworthy film roles include Les Misérables, The Danish Girl, and The Theory of Everything, though he may be best known for his work in Fantastic Beasts.

Redmayne’s role as a father trumps that of an award-winning actor. After the most recent Fantastic Beasts film was completed, Redmayne’s daughter wanted to play with Newt’s wand, and of course he agreed. An hour later, she had “covered the thing with tin foil, made a little star, and turned it into a fairy wand,” he says.

The latest installment of the series, Fantastic Beasts: The Secrets of Dumbledore, premiered in theaters on April 15, and it is expected to be released on DVD, Blu-ray, and Digital HD in July. For those who have not yet seen the film, Redmayne shared his perspective on what viewers can expect.

How would you describe your new Fantastic Beasts movie?

Dumbledore (played by Jude Law) sends me and a band of outsiders on a heist to save the wizarding world from Grindelwald, who’s the archnemesis. It’s full of wonder, magic, and whimsy, and it’s got a lot of humor and heart to it.

What do you appreciate about your character Newt?

I love the Newt-Dumbledore relationship because it’s got that complexity of master and apprentice, but it’s evolved throughout the movies to being something almost fraternal; a sort of older brother and younger brother. There’s a moment in this film where Newt takes it upon himself to see the vulnerability in Dumbledore and tries to pass on a mode of wisdom to him, so that is clearly a progression.

Did you know the whole story before filming started?

As far as the story of the arc of the series, it was sort of given to us each script at a time. Occasionally, we would get snippets of what might be coming up in the next films, and there would be quite a lot of whispers, “Did you hear this?” One of the amazing things about our director, David Yates, is that even though the script is there and the technical creative aspects of that script are a big technical feat, he would allow us as actors the freedom to improvise, to come up with new ideas, to change things or modulate things on the day of shooting. … That for me has been some of the most fun. A lot of these actors in the film are brilliant at improvising so watching them improvise and add just extra layers was wonderful.

Have you learned anything from your time playing Newt Scamander in the Fantastic Beasts series? He seems to have grown a lot over the course of the three films.

Oh, that’s a lovely question. I adore Newt, and there are many things that I love about him. I love that he’s an incredibly empathetic person. He looks for the good in people. He’s also very happy in his own company, and in the company of creatures. Newt is someone that enjoys silence. I’m someone that in my anxiety tends to fill too many words, like I’m doing now. But along with that, there are various epithets or things that he said which I now try and live by. … One is that worrying means you suffer twice, which was in the first movie. That I’m a great worrier and I always tell myself that if the horrendous thing’s going to happen, then there’s no point worrying about it because it’s going to happen anyway and you’ve just kind of doubled your pain.

Which is your favorite spell from all of the Wizarding World movies?

I would say the Tarantallegra one. … It is all about making people dance; something that I really can’t do. It was just so random. It is kind of a metaphor. I think in life randomly making yourself feel better by people randomly dancing is always quite fun.