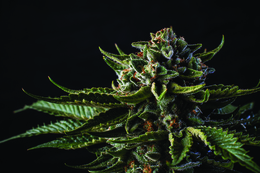 A Budding Industry
Those in the business of cannabis have nothing but praise for the early days of recreational adult-use cannabis, saying that all signs point toward a successful future.

New Jersey is two months into the legalized sales of adult-use marijuana, and, just as Edmund DeVeaux predicted, “the sky hasn’t fallen.”

In fact, the New Jersey CannaBusiness Association president says that the young industry has been establishing itself in its dispensaries’ respective communities just as well as expected, thanks to the diligence of entities like the Cannabis Regulatory Committee (CRC)—the state body tasked with both establishing and growing a responsible, regulated medicinal and recreational business. That painstaking attention to detail has been critical in recreational sales debuting correctly rather than quickly.

“I would say it’s as expected, and the reason is because we have not been made aware of any real trouble spots or problems,” he says. “When you drive by dispensaries and you see uniformed officers working with the public, working with the operators, I think it speaks very well of the industry and how it has been rolled out appropriately.”

DeVeaux is hardly alone in his optimism.

Paul Medany is the mayor of Deptford, home to one of New Jersey’s now almost 20 up-and-running adult-use dispensaries, a Cannabist location owned by Columbia Care that got its start by selling medical marijuana. The transition to accommodating recreational demand has been, he says, decidedly smooth sailing, aided by how thoroughly the township vetted Columbia Care and solicited residents’ feedback before giving it the green light.

“We talked to a lot of folks, and they all said, ‘Look, we really need this product,’” he recalls. “One of the largest [medical] customer bases is veterans, so we talked to a lot of veterans’ groups who said, ‘Yeah, we’re 100% for this,’ and that certainly helped in our decision-making process.”

Deptford’s entrance into the cannabiz was largely inspired by an exploratory trip then-Senate President Steve Sweeney made to Colorado when legal marijuana was making its debut on the national stage. Medany was privy to the wildly positive feedback Sweeney brought home with him, which “got the ball rolling” for bringing cannabis to the township—an effort that he reports has drawn a scant amount of pushback.

“There wasn’t any real outcry against it,” the mayor observes. “There are certainly folks who don’t like it. … I know there’s been a stigma against it since I was growing up in the ’70s and ’80s, but I think that stigma started to fade away when a lot of folks got tired of people going to jail just because they possessed a plant, or started reading up on the history of how marijuana became illegal and they realized that that law was never really the right thing to do in the first place.”

It’s not just going well for consumers and the municipalities that have welcomed recreational adult-use marijuana to their business landscapes. Hugh Giordano, representative and organizer for UFCW Local 152, the labor union whose members include cannabis employees, says that workers like cultivators, budtenders, security guards and dispensary staff have “overall positive” feedback about the first months of legalized recreational weed.

“Our members are very excited about opening up the adult-use market, and they’re proud of the work they put in to set it up,” he reports. “They’re professionals and they’ve been waiting for this.”

In November 2020, New Jersey residents showed their support for recreational cannabis with 67% of voters saying yes to its legalization; on Jan. 1, 2021, the constitutional amendment decriminalizing its sales took effect. For those “yes” voters who outnumbered the opposition 2 to 1, the journey to the first day of adult-use sales this past April seemed like an interminable slog, but there was necessary behind-the-scenes work to do to best position the new industry for lasting success.

Chief among those obligations is making sure those who are prescribed cannabis medicinally aren’t compromised in the crush of meeting new demands. Ensuring there’s enough supply and staff to support those patients’ needs remains paramount.

“The workers have been very open about saying that putting patients and their rights first is still their priority,” says Giordano. “The biggest advocate for patients, besides the CRC, is going to be the workers. That’s why it’s important for their voices to be heard, so they can speak up for not just themselves and each other but the patients.”

“When you look at the criteria that was established before license-holders could transition from medical-only to medical and recreational, the CRC, from Day 1, made it clear that medical patients would remain a priority for the state,” DeVeaux adds. He adds that launching recreational sales was partly delayed by the CRC’s late-March insistence that the state was short by 100,000 pounds of cannabis—assessed as an inadequate supply—that risked compromising the medical community.

“Not only has it not caused any problems, it’s been a benefit to the community,” he says. “By all accounts, it tremendously helps that certain population that needs that product medically. And then now comes recreational: Everybody’s got to be honest with each other, part of the recreational approval process was getting the 2% sales tax from the state. So not only is it fulfilling a needed medical use, now that recreational is legal, [the township] actually gets to benefit financially from it.”

That revenue, Medany adds, will go into Deptford’s general fund, where it will be earmarked for property-tax relief: “Anything that takes away from that property-tax burden is a benefit to every single resident.”

The Benefits of Legitimacy

Of course, job creation is another benefit to bringing a whole new industry to the state, and legalizing an entire field paves the way for an array of viable professional paths.

“There’s a lot of young professionals in this industry, from the whole seed-to-sale aspect, and they look at it like a career—and they want other people to look at it as a career,” Giordano says. “They have degrees in botany, horticulture and chemistry, and legitimizing their work opens people’s eyes to the fact that this is a trade that’s no different than any other trade.”

It is, after all, a business venture meriting normalization and acceptance, DeVeaux notes.

“This is no longer controversial, this is no longer problematic, we’ve had medical cannabis in the state for more than a decade: The cannabis industry is, in fact, taking its rightful place as a normal industry, a normal economy in this state,” he says.

Medany observes that, with dispensaries turning their respective towns into bona-fide destinations, neighboring businesses have benefited from that ensuing uptick in foot traffic, making the original strategy behind The Cannabist’s location—a business complex close to the mall—all the more of an opportune move that keeps reaping township-wide benefits.

“In that shopping center where the cannabis store is, there’s several places to get food and, on the day when they opened recreational [sales], all of those places were packed—it was great” Medany recalls. “Their sales increased exponentially. More folks come from out of town than in town to buy cannabis, and we wanted to be that regional shopping center. Those folks who are coming from out of town are supporting our local businesses—it worked exactly per our plan.”

As DeVeaux’s been visiting the state’s recreational dispensaries, he, too, is aware of an interesting trend illustrating just how in-demand and regionally rare recreational cannabis is.

“I think the Port Authority is enjoying this,” he says with a laugh. “We have made recreational cannabis legal and New York has not. Pennsylvania has not. Delaware has not. Anecdotally, I’m told you’ll see all those license plates in the parking lots of a New Jersey dispensary.”

For all the champions adult-use marijuana has, though, DeVeaux knows there are others waiting to watch the industry falter.

“There’s always the inclination or the temptation to judge this industry and its participants differently, but it’s a legal business now,” DeVeaux begins. “And in business, anything could happen—whether you’re a fast-food chain, a chain of supermarkets, a clothing store, the possibility of something going wrong always exists. What I ask, as president of the New Jersey CannaBusiness Association, which is essentially the state’s cannabis chamber of commerce, is that we don’t judge the cannabis-industry operators any differently than you do other businesses.”

And those in the cannabiz do agree the industry’s future looks bright. In fact, other countries are looking to recreational cannabis’ earliest American adopters to emulate their models.

“The workers, the employers and everybody in between have put a lot of resources into growing a strong and robust industry—and not just here in New Jersey,” says Giordano. “Based on conversations that I’ve had with other labor-union representatives who actually are part of the discussions in Europe, they are looking to us for guidance, for setting up a regulatory scheme that actually works, for—believe it or not—including social equity in part of that equation. So it’s happening on a global scale, and we’re having a major influence on that.”

DeVeaux adds that, per the most recent CRC meeting, licensure approvals will keep on coming, even if there aren’t any meetings on the docket. Those approvals to come will join the 148 operations already OK’d by the CRC since recreational sales began.

For Medany, a dispensary in town stands as testament to the municipality’s determination to bolster its medical presence.

Bringing recreational cannabis to Deptford has gone so swimmingly that Medany is more than happy to help other towns navigate the approval process and everything after so they, too, can share in the benefits that the Gloucester County township has already enjoyed.

“My suggestion to any local government is to try and do a straw poll with your residents to see what they think,” he says. “Consider your residents, because it’s all about them.”