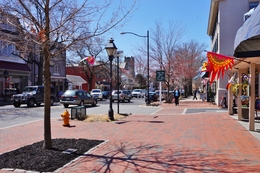 Top Towns 2022
From the quaint main streets bustling with activity and sprawling parks crawling with families to the desirable school districts and picturesque neighborhoods where curb appeal comes easy; is there anywhere else youâd rather be?

Look around any town in South Jersey and you’ll find plenty of tight-knit communities where civic pride runs rampant. Whether you’re attending an annual festival, a Little League game or strolling through one of the many farmers markets, there’s no doubt that South Jersey provides some idyllic places to live, work and play.

Our annual Top Towns spotlight is a celebration of these places we call home. Our rankings of South Jersey’s most desirable zip codes was formulated using data from the New Jersey State Police, the New Jersey Department of Education and the state’s Division of Local Government Services. Using a weighted formula, we combined average property values and taxes, crime incidents reported per 1,000 residents and high school performance numbers consisting of average SAT scores, graduation rates and more. The rankings are further broken down into two categories: big towns (population above 10,000) and small towns (population under 10,000).

For the second year in a row Moorestown topped our rankings, but the rest of our Top 25 saw plenty of movement up and down the list. Trust us, there are no losers here. Every town in South Jersey offers its own unique charm and allure, just further illustrating why these coveted communities are so beloved.