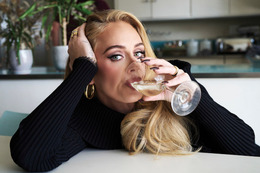 Triumphant Return
With 30, her first new album in six years, Adele proves once again that she is a unique talent and monumental force in the music world.

Adele is one of the most successful female artists in history, and the universal acclaim behind 30, her new album and first in six years, reinforces beyond a doubt the fact that in a changing, fragile and often artificial music industry, raw talent will always find a path to the top.

From relationships to confidence, through philanthropy and inclusion, the star’s honesty in terms of how she positions herself is admirable. Yet there is always something real to back up the message—from the music to the stunning magazine covers, which continue to document the star’s visual transformation.

From the moment the first melancholic and soulful opening lines of Adele’s “Chasing Pavements” reached the world’s airwaves, it was abundantly clear that the British songstress would go on to achieve big things, even if the eventual scale of her success was impossible to predict. The first single released from her 2008 debut album 19—named after the age at which she composed it—the song announced the beginning of a career that, some 13 years on, has seen Adele become an instantly recognizable name, face and voice across the globe.

Her debut earned the star, born Adele Laurie Blue Adkins, the first of 15 Grammy Awards. Each of her albums is named in the same manner—19, 21, 25 and 30 marking her musical milestones—and as well as the ever-increasing plaudits heaped upon their creator, each can be seen as a distinct point in Adele’s journey to the elite of the musical world, littered as it was along the way with all of life’s struggles.

“Every album is a phase in my life,” she begins. “Each comes with a different reputation and pressure and baggage, and that can make things tough.”

Romantic relationships have often affected Adele’s more melancholic musical musings, and her new album has its fair share of these. Debut single “Easy on Me” went to No. 1 across the world, and reflected mistakes made both in childhood and adulthood; while tracks “Cry Your Heart Out,” “To Be Loved” and Love is a Game offer similar themes.

“I have a greater resilience to myself nowadays,” she says. “That’s just something that comes with age. In the past, I’d sit in darkness and feel sorry for myself. I loved the drama of it all!”

Now 33, things have certainly turned around for Adele, who is in a relationship with sports agent Rich Paul, who represents LeBron James, among many others. The birth of her son Angelo in 2012 has been stated as a real turning point in her ability and willingness to call the shots; certainly the failing of her marriage to Angelo’s father Simon Konecki doesn’t seem to perplex her.

“The first thing is to be happy with myself, to appreciate yourself—only then can you try to change things.

You position yourself as an artist who uses the fuel of disappointment to create incredible art. Is that an unfair assessment?

A little [laughs]. I think what you’re talking about is the inspiration for my songs. That’s just the way it is. I write from the heart.

I sometimes feel people think I’m waiting for the next pile of setbacks, the ashes from which I can form into another album. Like I couldn’t just sit there and throw 12 tracks together—I genuinely need to suffer a bit beforehand [laughs].

But people respect your candidness, your honesty.

I think it comes down to how and when you put on the act. Is it in the relationship, is it in the songwriting, is it in front of the cameras, is it in interviews?

I learned from a very young age that we’re all acting, shaping ourselves and adapting who we are to different people and different situations. It’s the most natural human trait; it’s an intelligence we all have, and we all adjust ourselves to what’s around us.

Personally, I know my music is the time during which I can be my most truthful and honest. I am constantly in awe of the fact people see and trust that, and even more amazed that they care. Yet that is empathy for you—it’s just someone putting an idea out there that we can all grab hold of and take a little piece of, and I think that’s a wonderful thing to share.

You seem to have your creative process down to a fine art, certainly in terms of each album representing a different phase in your life.

That’s just it—every album is a phase in my life. Each comes with a different reputation and pressure and baggage, and that can make things tough.

I am a happier person now than I was when I started out, though. I would certainly hope that to be the case, because how I felt when I wrote 21, I wouldn’t want to feel that way again.

I’ve said it previously, but in my mind that may have been my first and last record. I wasn’t sure what else I was supposed to do. I could easily have just ebbed away, quite happily.

None of my mental state was helped by the fact I would just let myself drown. If I was sad, if I was confused—which I would say were the running themes for most of my records—I’d just go with it. I’d let myself fall apart; I’d sit in darkness and feel sorry for myself. I wouldn’t accept any help to get out of it, in terms of going out with my friends to cheer me up, or staying busier. No, I loved the drama of it all!

You seem much more positive and uplifted than perhaps at any time in the past.

Clearing out the past is only something I’ve become better at over the last few years.

I think when you become a parent, you simply lose the capacity to worry about as many things as before. I haven’t got time to fall apart. I’m the backbone for my kid and I want to be there for him.

Everything I do, in every channel of my life, is part of a legacy that I’m making for my child. I felt so mega having given birth; the confidence from that, I felt unstoppable, and to a large extent I still do. It’s the greatest thing I ever did. He makes me feel young, and there’s nothing more grounding than a kid kicking off and refusing to do what you’re asking of them. It used to be that my world revolved around me, but now it has to revolve around him.

All the things I really like about myself, he brings out in me, and he’s the only person who tells me no. He completely rules me. He’s the boss of me and it’s so funny for other people to watch because I’m the boss of everything in my work life.