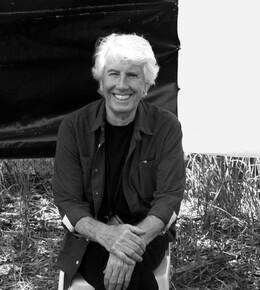 Simple Man
Rock legend Graham Nash, whose songs have spanned generations, still has plenty to share with fans as he kicks off a tour in Collingswood next month after a two-year delay.

When Graham Nash approaches the microphone at Scottish Rite Auditorium in Collingswood on March 2, the opening night of his tour, he imagines saying, “Now, where was I?” Although he and his fans have been waiting the better part of two years for this experience, Nash—a perpetual storyteller in more ways than one—hopes to pick up right where he left off.

“The two-year gap is unbelievable for a musician. The truth is, we can’t wait to get out there and play live,” he says.

For many in attendance, Nash’s music has provided the soundtrack of their lives. He has twice been inducted into the Rock and Roll Hall of Fame as a founding member of the British Invasion-era band The Hollies, as well as Crosby, Stills & Nash, whose songs “Suite Judy Blue Eyes,” “Our House,” and “Teach Your Children” defined an era that America continues to be fascinated by. Just as the recent Beatles documentary Get Back revealed never-before-seen moments in the band’s creative process, Nash’s latest achievement is a book that provides a glimpse of the rock-and-roll life through his eyes.

A Life in Focus: The Photography of Graham Nash, contains five decades’ worth of personal photographs and artistic stills shot by Nash. Intimate and candid, the photographs include subjects the likes of Joni Mitchell, Neil Young and Stephen Stills, along with self-portraits and snapshots of interesting objects, places and people Nash has come across in his travels, whether walking around his neighborhood in New York City or abroad.

Nash sees his photography as another conduit for expression despite the fact that not everyone looks at life through the same lens. Although he had not publicly come forward at the time of this interview, Nash and his former collaborators have been in the news recently, speaking out against the spread of misinformation on the streaming platform Spotify and requesting their music’s removal. Nash and his peers never shied away from commenting on political and social movements through their lyrics: “Chicago,” featured on Nash’s debut solo album, Songs for Beginners, speaks to the violent 1968 Democratic Convention and the subsequent trial of the Chicago Eight.

On the eve of his 80th birthday, South Jersey Magazine spoke with Nash about the responsibility he feels as an artist, what fans can expect from the tour and when to expect new music from him.

Your upcoming tour dates are in more intimate venues. Do you prefer this experience?

I’ve played in front of a half-million people, but playing these beautiful venues is much more intimate and I don’t want to act like a rock star. I’m just a kid that makes music and hopes you like it. … So far for 60 years they have. Audiences are going to have a wonderful time hearing songs they’ve heard and ones they haven’t. I’m really looking forward to it and so is the band.

When you look into the audience now, do you see a mix of generations?

Absolutely. We did a study a few years ago and saw the demographic spanned from people 14 to 65. A lot of people have turned their kids on to the music they grew up with or older siblings are turning their younger sibling on to it.

Since you have been unable to tour during the pandemic, how did you keep busy?

We’ve been making a brand-new record, and doing it all remotely. We’re already 10 tracks into it and it’s working very well.

What’s it like to record an album when everyone is scattered around the country?

I have a very small studio in the back room of my apartment and when I have a song idea I’ll record it on an acoustic guitar with a rough vocal and then I send the track to guitar player Shayne Fontayne in LA. He puts on the guitars and bass and sends that to Toby Caldwell for drums, who then sends it to Todd Caldwell in Brooklyn who puts on the keyboards. The track comes back to me and I mix it. … One of the secrets of recording remotely is making it sound as if all of us were in the same room and that’s very interesting. So far it’s worked out tremendously and the album will probably be out in late summer.

Neil Young was in the news [recently] asking Spotify to remove his music. Is it still important to you that your music stands for certain things?

Yes, because we’re human beings and we see what’s going on in the world and we have to make a comment about it. You’re allowed to speak your mind [in America] but there are likely other countries where Crosby, Stills, Nash & Young would not even be played. … When people come to my show they are going to see my heart on my sleeve. I’m an ordinary guy who lives in this world and gets upset with stuff, I fall in love with stuff. I try my best to make the world a better place for me and my kids and everyone’s grandchildren.

Your new photography book gives us some perspective on your life and what you find interesting. When did this passion start for you and where do you find inspiration?

I’ve been a photographer longer than I’ve been a musician. I started with a camera when I was 10 and the book has images I took when I was 11. I took a portrait of my mother that I just loved and I’ve been photographing ever since. [My inspiration] comes from all over. I’ve had interesting friends and been in interesting places. I’ve seen madness—surreal images in front of me and was disciplined enough to have a camera.

So many of the images in the book are candid and raw. Why do you think you are drawn to this style?

What do you think people will learn about you from this book?

I think, well I hope, they smile. I’ve watched a lot of people looking through the book and I see them smile. I think they will see I’m very aware of what’s going on. I’m living in this country that I know has got problems, but there are many wonderful things about America. I love being an artist and expressing myself.

You turned 80 at the beginning of February. Does this milestone affect you at all?

It has no effect. One can’t help thinking about coming to the end of their life and wondering how much longer it can last, but I am just going to keep on creating every day like I usually do.