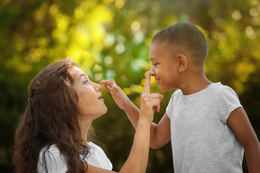 âAn Addition, Not a Subtractionâ
November might be National Adoption Month, but New Jerseyâs advocates, organizations and families whose lives have been touched by adoption live its incredible rewards and unique challenges every day.

The definition and perception of what constitutes a family have, especially in recent years, evolved to accommodate all the ways American households fill a home with love.

Adoption is among those methods seeing increased acceptance in helping many realize the dream of parenthood, especially as those whose lives were changed by it have more ways than ever to share their stories.

Since 2000, November has been National Adoption Month, with National Adoption Day observed the Saturday before Thanksgiving. It’s an opportunity for advocates, organizations and families throughout the Garden State to celebrate the loving choice that brought children and their forever families together.

“It’s an important month, and so is National Adoption Day, which is celebrated in the courts where some adoptions are finalized for children being adopted through foster care and adoption agencies,” says Valerie Fiorentino of Children’s Home Society of New Jersey, noting that the annual event has been adapted for COVID’s safety guidelines. “Before the pandemic … there would be speakers, events and gifts to celebrate the families who were finalizing their adoptions.”

Debbie Jaques of Family Option says that while “smaller in-person gatherings are encouraged,” the organization’s National Adoption Month observances are largely relegated to the virtual sphere.

“Social media helps us connect with our families, as well as lets them take the month to appreciate the birth parents and reach out to them,” she explains. “This is now the second year we’re not able to have a reunion, so what we’ve done is encourage people to meet individually outside.”

Virginia Kenny, assistant director of Child Protection and Permanency at the state’s Office of Adoption Operations Department of Children and Families (DCF), says that while the opportunity to have an annual celebration of the families touched by adoption is an important avenue of education, championing adoption is a year-round endeavor, especially since some stubborn myths do persist.

“In the past, we’ve been able to have interviews with some of the families, where they can talk about their adoption experience,” she says. “That ongoing support of youth and their families is really a culmination of support that’s built in both pre-permanency and after adoption.”

One of the most significant changes in public perception of adoption is that the undeserved shame surrounding it has finally begun to recede into the past.

As that undue shame is replaced by images of loving, thriving families and strong parent/child bonds, the narrative has proportionately improved. Children’s Home Society of New Jersey was founded in 1894, and Fiorentino is pleased with the cultural changes it has witnessed throughout 127 years, especially those within the past half-century.

“Adoption has changed and evolved greatly—even just 50 years ago, there was shame and secrecy surrounding adopting,” she says. “It’s really a perception that has been shaped by society and how people have viewed adoption, and it’s great how that sensitivity to it has really progressed.”

Correcting the presumption that adoption should remain a dirty secret has incredible emotional benefits. With biological mothers especially more interested in maintaining communication, creating an extensive support network around everyone involved in a child’s adoption story is a healthier alternative to vilifying birth parents.

“You’re not really seeing adoptive families who are refusing to identify or include the biological parents out of insecurity anymore, and I think it’s because of all the education and because OBCs (original birth certificates) are now opened up to adopted children,” Jaques points out.

Keeping biological relations in the picture, especially as a positive influence, goes a long way to further combat the nasty myths that a mother is “giving away” her baby or is motivated by anything other than love while making the difficult decision to place a child with adoptive parents.

But the misconception that adoption is a path of resignation and exhausted options, rather than a perfectly valid way for many parents to achieve their dream of having a child to love, is one that Fiorentino is eager to see fall by the wayside.

“I think some people have seen adoption as like a second choice for families who wanted to have biological children, and that couldn’t be further from the truth,” she notes. “It’s just another way of building a family.”

There are seemingly harmless, well-meaning misconceptions that run the risk of dehumanizing adopted children while playing into hero complexes that are dangerous in their own right, though they, too, are increasingly obsolete.

“This savior mentality … can be very damaging to these kids when they feel like they need to be saved,” says Jaques. “You don’t really see that savior response anymore but people will still say things like they want to help a child. Helping a child is a lot different than being their parent—just like you’re not ‘rescuing’ a child. If you want to rescue someone, rescue a dog! You’re not honoring a child as a person when you’re talking about rescuing them.”

As adoption becomes better understood, so too does its impact, like the inherent trauma and adjustment that comes with placing a child with a family they’re not born to, and how that can permanently affect their developing brain.

“DCF has that robust system of care to support youth and their families that have experienced trauma, or maybe need mental-health, behavioral-health or social support, and that’s available to any youth in New Jersey,” says Kenny. “I think the discussion of and acknowledgement of trauma, and being able to support youth after the trauma they’ve experienced that brought them into care is important.”

She adds that the goal is always to reunite a foster child with their biological families if circumstances and safety allow, or placing an adoptive child with familiar, trusted adults.

Adoption is an adjustment for everyone, especially a child who’s settling into a new routine, family dynamic and more. No matter how loving the environment, not feeling fully at home or not knowing how to trust a well-meaning adult can leave them in a difficult emotional place they’re not sure how to navigate.

“It really is a transition for the entire family as they claim that child or youth as their own,” Kenny explains. “Incorporating traditions and culture can help. We know how important it is to understand each child’s developmental needs, and I think that claiming piece has always been one of the most important elements.”

While it has improved in recent years, the way society regards adoptees can also create emotional hurdles. Jaques understands that all too well: While her son is now in his 20s, she tried shielding him from the harmful effects of incorrect assumptions when he was younger.

“I made it my business to correct those little judgements that even a child in the third grade is sensitive to, comments like ‘Oh, he acts out because he’s adopted,’” she recalls. “My son’s school made such a big deal out of it when they found out he was adopted. Maybe if I hadn’t seen such biases against children who are adopted, I would have shared his story with them sooner.”

The definition of family keeps evolving to be more inclusively accurate. Single parents, older parents, mixed-race couples and LGBTQIA+ couples are all benefiting from an increased acceptance as the valid families that they are.

“Adoption language has changed to reflect that it’s a positive choice,” says Fiorentino. “That’s definitely helped, as well as the way society looks at families now. It’s not just the traditional husband-and-wife family, especially in the last 20 years. We work with the LGBTQ community and we have single parents who are adopting, so that’s definitely progressed in an exciting way.”

Others are turning to adoption for reasons ranging from infertility to simply always feeling like adoption was the best choice for them.

“The expectation was that you get married and then you have a biological child, and that’s different now because more people realize that families can be made in different ways,” Fiorentino continues. “The people making an adoption plan come from all walks of life and are all ages: We work with expectant parents who are high school and college students, as well as married couples in their 30s or 40s. It’s all about looking at where an individual or couple is coming from without judgement to make a plan that’s best for them and the child.”

Jaques says that closed adoptions—where a child has no real avenue of knowing their birth family—becoming a thing of the past is also a signifier of progress.

“As more people recognize that a mother who places her child in adoption does it as an act of love, we’re seeing more open, ongoing relationships between adopted families and birth families who both want what’s best for the adoptee,” she says.

Because, ultimately, adoption is about growing a family of the heart, not breaking one apart.

“Adoption, especially in its more recent history, has become much more of an effort to connect all of these families together, to keep children connected to their adopted family, their bio parents, their relatives, their community,” Kenny says. “It is an addition, not a subtraction. We know that what leads to the best outcomes is having a youth feel connected to the multiple adults who love them, nurture them and support them.”