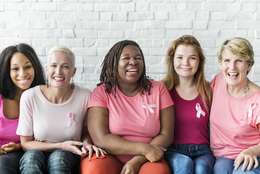 The Earlier the Better
Screening for breast cancer from an earlier age and with advanced technology can be one of the best tools for survival.

With all cancers, the earlier the diagnosis, the better. Doctors use a variety of tests to detect the presence of cancer in the body, and for breast cancer specifically, the first line of defense is a mammogram.

Unfortunately, some women are hesitant to have this screening, perhaps because they’ve heard it’s painful, are concerned about radiation or they feel perfectly healthy and don’t see the need for it.

“A lot of people are afraid it will hurt, and it varies depending on the technology. You will feel a fair bit of pressure but it should not hurt. Taking Motrin ahead of time can help decrease that discomfort if you have breast tenderness,” says Sherrill Little, M.D., D.A.B.R, a diagnostic radiologist at South Jersey Radiology (SJRA), who adds that radiation exposure is minimal. “With 3D mammograms, radiation is half of what it was with 2D and is done in the same amount of time.”

Although there are misconceptions out there, mammograms remain one of the best tools in decreasing mortality due to breast cancer.

“Mammograms are not a perfect test but it’s the best test we have for screening and for decreasing mortality due to breast cancer. The earlier it’s detected, the better the prognosis and more readily treatable. That means less treatment, less of an expense and better outcomes for patients,” says Lisa Zorn, M.D., M.P.H., medical director of breast imaging at Jefferson Health - New Jersey (JHNJ).

The screening technology has come a long way, much to women’s benefit. “I’ve been doing this since 1998 and things have changed dramatically since then,” says Little. “At that time, we used film screening and now digital mammography has improved the accuracy of findings. That has been improved over again with 3D mammography, and I think something even better will come in the future.”

The age at which most women should begin getting mammograms is controversial, says Zorn, but JHNJ follows the American College of Radiology recommendations. “In randomized control trials the most lives are saved when starting mammograms at age 40. Young women get aggressive forms of breast cancer so we must detect it as early as possible,” she says.

“We recommend patients get a risk assessment performed by age 25. There are some patients at higher risk due to a strong family history of certain cancers, genetic mutations, prior history of chest radiation, and in those cases, patients should get a mammogram and additional supplemental screening tests done earlier than 40."

The pandemic did create a delay in some women’s annual screenings, say both Zorn and Little.

“Part of that was because we were not doing them at the beginning of the pandemic as many institutions were just offering imaging for more concerning findings or already diagnosed cancer. Some women’s annual schedules were pushed a little later but we are recommending they come in and get screened. We don’t want to see delayed diagnosis of cancers,” Zorn says.

At both JHNJ and SJRA, 3D mammography is the preferred screening test for breast cancer.

“It’s state-of-the-art and gives a nice view of breast tissue. Sometimes the breast tissue on a 2D mammogram can overlap and look like something, and the patient might be called back for additional views. The 3D mammo can often differentiate a real finding from normal breast tissue,” says Zorn.

For patients with dense breasts, mammograms can be hard to read because dense tissue can mask things doctors are looking for to detect breast cancer. “We have several supplemental screening tools, such as automated breast ultrasound and contrast enhanced mammography, which allows us to see the breast tissue in a different way. These tools are meant to complement the mammogram, not replace it,” she continues.

If a patient is high-risk, with a calculated lifetime risk over 20%, a breast MRI may be ordered to investigate findings further, says Little.

“A mammogram is a great thing you can do for yourself. It’s proven to save lives and it’s important to have one,” says Zorn. “The best protection is early detection.”

Comfort in the community

Twenty-six years ago, when Loretta Mikulski was diagnosed with Stage II breast cancer at age 43, she had no risk factors or family history. The cancer was treated with chemotherapy and radiation for weeks on end. Years later, the cancer spread to her bones and she had her lymph nodes removed. Yet somehow, in the midst of this personal battle, she and a friend founded the South Jersey Breast Cancer Coalition in 1997.

Along with education, awareness and advocacy, one of the SJBCC’s biggest initiatives is its client assistance fund. The fund provides financial assistance to those with breast cancer to help cover essential bills while undergoing treatment. More than $200,000 has been distributed to clients through the years, however, funding took a significant hit as a result of the pandemic.

“Much of our fundraising efforts came to a halt, which means we were not able to help as many people,” Mikulski says. “It’s been a learning curve trying to figure out how to run a nonprofit virtually. We can’t compete with the big societies.” SJBCC received a CARES grant from Camden County, which helped, and now she says things are picking up speed again, especially this month in observance of breast cancer awareness.

“A local salon raised $1,000 just by collecting from their clients. It’s been a blessing to see how people came to our aid when we needed it,” she continues. “This month we also decorated Berlin Borough and we had a group of people turn out to help, and there is a sorority that will be coming to help take the decorations down. People want to help.”

As a survivor, Mikulski can appreciate the progress that has been made in diagnosing and treating breast cancer. “I think we’re fortunate that we [in South Jersey] have so many places to choose from. In other parts of the country, hospitals are few and far between,” she says. “You have to be your own best advocate. Only you know how you feel. If it doesn’t sit right, get a second opinion.”

If a person is confronted with a diagnosis, Mikulski says there is support out there if you look for it. “We’re about more than the pink ribbons, it’s about community,” she says.