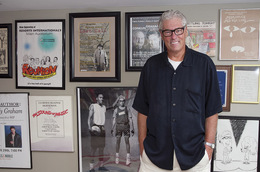 I remember it like it was yesterday. My phone rang—just like it would so many more times over the years—and when I answered, “Hello,” the person on the other line responded with, “Pete, Big Daddy.” It was a greeting that would become all too familiar.

Flashback to the summer of 2012 when during an editorial meeting, my staff and I discussed profiling Big Daddy Graham in the magazine. Well-known for his hosting gig on 94WIP, his stand-up comedy shows throughout the region and his numerous television appearances, we thought the Southwest Philly-turned-Mullica Hill resident would make for a nice spotlight.

When the photographer arrived at his home to shoot some portraits, Big Daddy hammed it up for the pictures, posing as Elvis and smiling plenty wide alongside his prized jukebox in others. Then, just as our photographer was readying to leave, Big Daddy suggested maybe taking one more photo. He went into his closet, changed into a dress shirt and threw on a suit jacket. Surely, this was way too serious of a look for a jokester like him. Then he jumped into the pool. Priceless.

It wasn’t but a month or so later, after the issue had come out and he saw the story, that I received the aforementioned phone call. “Pete, Big Daddy.” He told me that he always really enjoyed the publication and asked if he could begin writing for us a columnist. I admit, I wasn’t ready for that proposition. A columnist? Big Daddy? He touted how he’d been writing a lighthearted column for the Sea Isle Times and how well it was received.

After discussing with the publishers, we decided to give it a try. Little did I know what a zeal for writing Big Daddy actually had. His columns had a local flavor, were funny, engaging and a big hit with our readers. In fact, I’ve probably gotten more correspondence over the years about his columns that mostly anything else we’ve published during my 12 years here.

The relationship would blossom over the years and when we moved him to the back page, he was over the moon. It was prime real estate for him to anchor the magazine and really showcase his stuff.

Years later, in 2019, while down the Shore at his beloved Sea Isle home, Big Daddy began to feel an unbearable pain in his back. He laid on the floor to try to ease the sensation, only to find that he couldn’t get back up. Sadly, many of you know that a blood clot burst in his back and bled into his spinal cord, a freak occurrence that would ultimately leave him paralyzed from the waist down.

After a few weeks, the phone rang again. “Pete, Big Daddy.” Here he was, calling me from his hospital bed and wondering if he could still write his column. I was floored. He had bigger things to worry about, but he was going stir crazy in that bed and it was the creative outlet he needed at the time he needed it most.

And he would continue to write his column, each month without fail and never missing a deadline. He chronicled his challenges, poked fun at the situation and furthered his connection with the audience. A few months after this, my mother fell quite ill and was in the ICU. When he caught wind of that, he made sure to check on me. When she passed a little while later, he let me know that he was thinking of my family. With all he had going on, he was worried about me. That should tell you what kind of man Big Daddy was.

By now, you also know that Big Daddy passed away in early September. I was shocked to wake up to multiple text messages. Our office was sullen when word spread. The tributes began to pour in, from his colleagues on the radio, a moment of silence at the Eagles game and so on.

Big Daddy Graham touched a lot of lives and because of that he will live on in our memories. For a man who made so many others feel good, it’s only fitting that we honor him properly. Please check our October issue for a larger tribute to the man who meant so much to so many. Rest in Peace, Big Daddy.